Local man to 'crawl' up Carrauntoohill Mountain for two charities 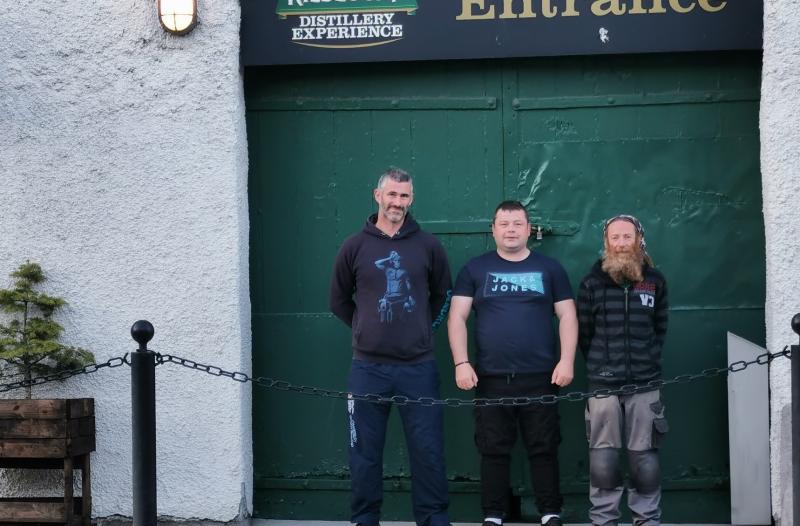 Pictured Dermot Carroll, Mark Rowan and Les Byrne. Les and Dermot are walking up beside Mark in case he gets injured along the way.

MARK ROWAN is a strong, inspirational man, who has come through some very traumatic times. He is now using his own life experiences to reach out and help others.

Mark is planning to crawl up Carrauntoohill Mountain in Kerry, a height of 1,038 metres on September 8 prior to World Suicide Prevention Day on September 10. He will be accompanied by his two friends Dermot Carroll and Les Byrne who will walk up with him in case he sustains injuries along the way.

Mark who from Kilbeggan is hoping to complete the climb in two days and anticipates being back on September 12 for the birthday of the little girl who motivated him to undertake the climb, Amber his daughter who unfortunately died.

Mark is undertaking the climb for two charities Accessible Counselling in Tullamore and Ronald McDonald House which gives support to the families of sick children in Crumlin Hospital.

This is Mark’s story.

''My name is Mark and I’m just your average fella that got dealt a bad hand in life. My childhood was anything but good. I was failed by the people that were supposed to protect me, and then failed by the system. I constantly felt out of place, the truth is I had always suffered from mental health problems. Although, hindsight is wonderful. In my younger years I coped. I learned to put my problems to the back of my mind without dealing with them. I did not question things as it was my normal, my reality.

Fast forward a few years to the point things really started to crumble, my princess Amber Rose was born. Amber was my third child and she was born with a rare condition known as a diaphragmatic hernia. She was born in Holles Street for this reason, and was then rushed to intensive care in Crumlin to await surgery. My wife discharged herself straight away so we could both be with our little girl. Amber had her operation at just 2 weeks old and initially all was well. However, in week 3 the problems started. The only way I can explain it was, it was like being on a roller coaster,'' said Mark.

''The strain at this time on my family was horrible. My two sons were very young at the time. We had to get them up at the craic of dawn to travel to Crumlin every morning trying to beat the rush hour traffic.''

We had nowhere to stay and only myself or my wife were allowed into the ICU to Amber. We would take turns in trying to entertain the boys in the hospital corridor whilst the other would sit at Amber’s bedside. Every meal we ate was a takeaway which was adding to the financial burden every day.

Thankfully we were offered a room in Ronald McDonald House, it was like winning the lotto for us. We had somewhere to stay that was safe and secure. We had a private room with beds for us all, including the boys and a private bathroom. It had a kitchen filled with food we could cook, most of which was donated by generous people and companies. My kids had a lovely play area and a TV to watch when they wanted. The place was amazing and the staff there were extremely nice and the best part was it was on Crumlin hospital grounds a short 5 minute walk to my little princess's bedside.

Unfortunately, everyone staying there was the same as us, consumed by worry, stress and anxiety for their sick children. Yet in this building filled with so many hurting souls we found a community of people that supported us and we offered our support too. It was the first time I realised that there were good people in the world. I’ll never forget the way we were treated. It was when my princess started to go downhill that it really made a difference. We weren’t living day to day. It was minute to minute being so close and being able to be with her whenever we needed. Ronald McDonald house gave us so much, but their biggest gift was time as a family with our princess.

Amber’s health spiralled downwards, an infection meant she was going to die. My smiling face confused doctors who called me back to ask if I understood what was happening. It’s only looking back now that I see I reverted to my normal habit of pushing trauma to the back of my mind.

Then came the point in time where me and my wife had to give permission to turn off the life support. Following this difficult conversation I remember being in the ICU hallway and another guest at McDonalds House passed me and it was the first time I nearly cried, but I just stopped and just carried on. That night was the first time me or my wife had gotten to hold Amber. In those few short moments, the supports were removed and she passed peacefully in our arms.

Amber’s funeral was a trigger point for the start of a realisation of my own mental health issues. I was having a breakdown. I tried to get help but it wasn't there. I got to the point where I tried to self medicate but all that did was pour fuel on the fire. I finally tried to admit myself to hospital but was refused and referred to day services.

I waited to be seen. After my first consultation I was advised that I should be admitted to hospital for treatment. While in hospital I developed a love for art. I found I could paint what I couldn’t say into abstract paintings, a form of personal therapy I still do to this day. My home is filled with canvas after canvas, each with its own story to tell.''

After his discharge Mark describes the services available to him as ''like putting a plaster on a wound that needed stitches. I was also on so much medication I was left a shell of a man.

''After making a decision to invest in private care, I was given an entirely different diagnosis…. one that made sense to me. My whole life was taken into consideration not just the time prior to my breakdown. With limited finances I returned to the system and started seeing my GP. He developed an interest in me in relation to the brain and I read book after book about how the mind worked, from psychology to neuroscience. I learned mindfulness and a number of other alternative therapies. After each session I would spend days painting it all out. I have rebuilt my mind and have found pride in a job helping others.

Now that I am recovered I want to help others. I want to show everyone that there is hope. I now look for the positives in every situation including one as devastating as the death of my daughter. If I could change the short life my daughter lived I would, or if I could have taken even a fraction of the pain she suffered from her I would, but instead I thank her for teaching me that I wasn’t living my life I was always suffering without realising it. Amber’s death and the events that transpired saved me from a life of hell. I hope by crawling up the highest mountain in Ireland I

might also help someone else realise, every mountain can be conquered even if you have to crawl.''

''ACT Accessible Counselling Tullamore who were not established in my time of need but offer such great support for people suffering with mental health problems.''

I’m going to try to raise money for Ronald McDonald House as they gave us so much in the weeks we spent with Amber in Crumlin. They are a lifeline for so many families with very ill children. Also “ACT'' Accessible Counselling Tullamore who were not established in my time of need but offer such great support for people suffering with mental health problems.''

To make a donation to Mark's fundraiser log onto a www.idonate.ie/thecrawl