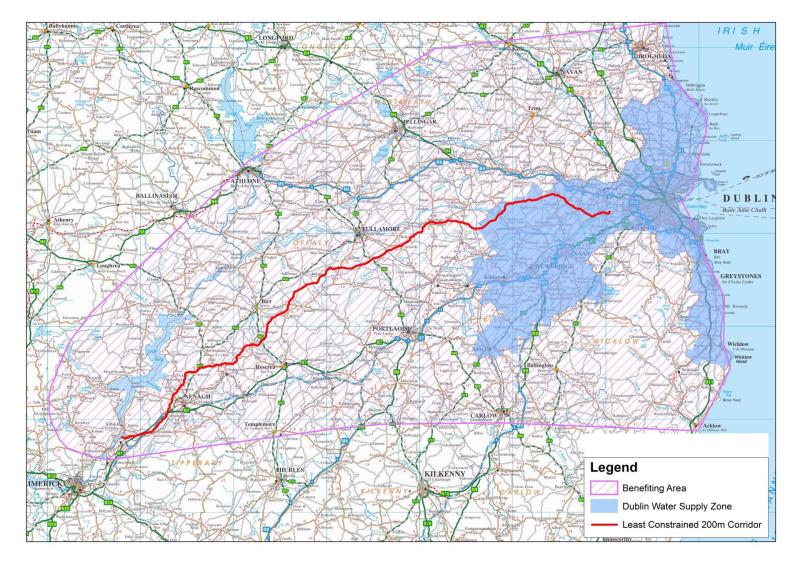 The route of the Irish Water pipeline

Irish Water has  published the ‘Final Options Appraisal Report’ which identifies the Preferred Scheme for a new source of water supply for its Eastern and Midlands Region.

The pipeline starts on the eastern shore of Parteen Basin in Co. Tipperary, with water treatment nearby at Birdhill. It will cross into Offaly north of Shinrone. It will be situated just north of Shinrone and then runs parallel to the N52 from Birr to the Blue Ball coming close to Mountbolus along the route.

From there, it cuts across to Killeigh traversing the N80 before moving towards Geashill. At this stage it cuts across country to Daingean before twice crossing the R402 near Ballyhugh. From here, it heads east and crosses the border into Kildare north of Clonbullogue.

The Water Supply Project will deliver secure and sustainable water for over 40% of the country’s population up to 2050. This will stimulate and facilitate new home developments and new job creation enabling construction and investment across the Eastern and Midlands Region. The focus of the studies and investigations over the past number of years was to identify the most sustainable option that would benefit the maximum population while minimising the environmental impact.

Irish Water is holding public consultations over the next fourteen weeks to seek feedback on the proposed development of the Preferred Scheme and to seek views on what should be considered in the Environment Impact Statement (EIS) which will accompany a planning application to An Bord Pleanála in late 2017.

The Water Supply Project comprises the sustainable abstraction of water on the eastern shore of Parteen Basin in Co. Tipperary, with water treatment nearby at Birdhill. Treated water would then be piped 170km to a termination point reservoir at Peamount in South County Dublin. Supplies of treated water would be made available to Midland communities along the route from Parteen Basin to Dublin.

The Preferred Scheme is the first major new water source upgrade for the Eastern and Midlands Region in over 60 years.

While significant progress has been made in relation to water savings from leakage reductions and water conservation initiatives, these savings alone will not meet the long term needs of the Region which will require an additional 330 million litres of water per day by 2050, the equivalent of 125 Olympic sized swimming pools per day. The maximum sustainable production of treated water from existing water sources and infrastructure within the Region do not have the capacity, resilience or connectivity to meet future demand.

During the third phase of public consultation in November 2015 Irish Water examined a number of options before proposing the current Preferred Scheme including desalination of seawater from the Irish Sea in Fingal. Desalination was rejected as it is one and a half times more expensive, would require very high energy use and would have potentially significant negative environmental impacts. In addition desalination in Dublin would not provide any benefit to towns and communities throughout the Eastern and Midlands Region. Parteen Basin, on the Lower River Shannon, was identified as the ‘emerging’ preferred abstraction option with a 2km wide least constrained pipeline corridor between Parteen Basin in Co. Tipperary and Peamount in South County Dublin.

Full details of the process by which the Preferred Scheme was identified are set out in the Final Options Appraisal Report which can be viewed on the document.

Irish Water has also published an Environmental Impact Statement (EIS) Scoping Report. The EIS Scoping Report considers the nature and likely scale of potential environmental impacts that may arise from the Preferred Scheme.

The Environmental Impact Statement (EIS) will present the final scheme and pipeline corridor and will accompany Irish Water‘s planning application to An Bord Pleanála in late 2017. At that stage An Bord Pleanála will commence its statutory public consultation.

Irish Water is now holding public consultation over the next fourteen weeks to seek feedback on the development of the Preferred Scheme and the scope of what’s being proposed for consideration in the EIS. Members of the public are welcome to attend any of the scheduled Open Days in order to meet the Project Team, find out more about how the project will serve your area, ask questions and share your views. Details of all scheduled Open Days are available on www.watersupplyproject.ie and will be advertised in local and national media.

In order to ensure stakeholder feedback is considered in advance of the project progressing further, all feedback for this consultation should be sent by 5pm on 14th February 2016, by email to watersupply@water.ie or by post to Water Supply Project, Merrion House, Merrion Road, Dublin 4.