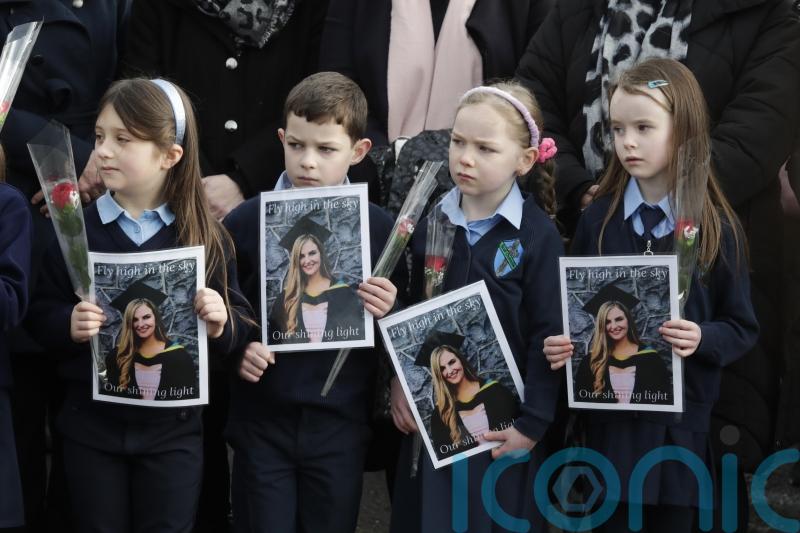 A “depraved act of violence” which deprived Ashling Murphy of her life has united the country in grief and support, mourners at her funeral have been told.

Bishop of Meath Tom Deenihan said the murder of the 23-year-old woman has asked questions of “ourselves and of society”.

The body of Ms Murphy, a talented musician and teacher, was found on the banks of the Grand Canal in Tullamore in Co Offaly, sparking a murder investigation.

Her death has intensified debate around women’s safety and prompted calls for more to be done to tackle gender-based violence. 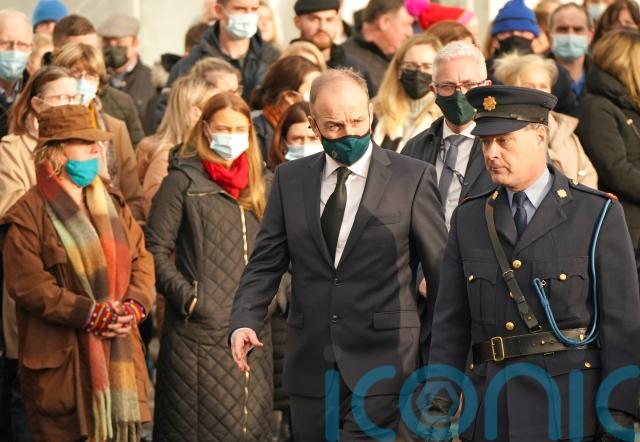 Huge crowds gathered for the funeral in the village of Mountbolus, and outside St Brigid’s Church, where Ms Murphy’s funeral mass is being held.

Bishop Deenihan told mourners that Ms Murphy’s murder has questioned attitudes, particularly attitudes towards women, and “our values and morality”.

“Whether those questions will be addressed or passed over remains to be seen but we cannot allow such violence and disregard for both human life and bodily integrity take root in our time and culture,” he added.

“The past few days have been a nightmare. A walk on a mild and sunny afternoon in January should be a happy event, promising the brighter and warmer days of spring and summer.

“That, as we know, was not the case. A depraved act of violence which deprived a kind, talented, loved and admired young woman of her life has since united the country in grief and support.

“We all know that no  individual should die like Ashling and no family should suffer like Ashling’s. 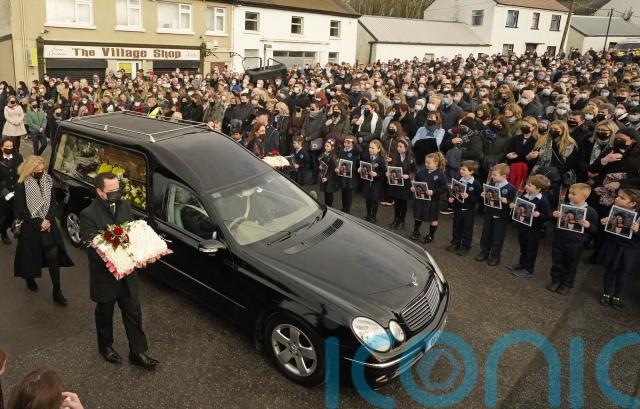 “Respect is an old-fashioned word but it is an important one. Respect was missing last Wednesday but it has re-emerged here all the stronger.

“Let us respect each other.”

Irish president Michael D Higgins and Taoiseach Micheal Martin were among those in attendance at the funeral.

Symbols of Ms Murphy’s life were brought to the altar during her funeral, including a fiddle, a Kilcormac/Killoughey camogie jersey, a family picture, a school book and her photo.

Parish priest Michael Meade told mourners that Ashling’s family has been “robbed of your most precious gift”.

“A gift that gave only joy and love, fun and laughter to many, many beyond yourselves and bounds of your own home,” Fr Meade added.

“Let us not be afraid to make change a reality in all our lives, change for what only is good. 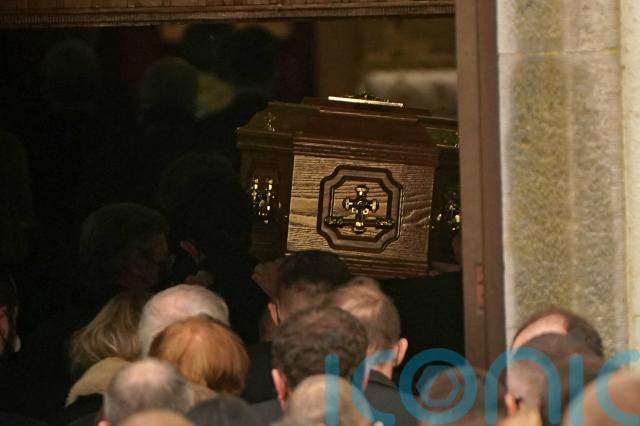 “Together we grieve, we pray, we hurt – this is the heavy price we pay for love – we gather as a family of faith, to be with, to support by our prayer and our presence, those whose darkness is deep, whose pain is raw and fierce.

“The issues raised in many ways and by many voices since this horrible act of violence invaded all our lives will, we pray, continue to evolve and bring the change we need so much.

“Not to talk about it but to simply give and show respect.”

He said that Ms Murphy’s love was “freely given and shared” through music, sport and her vocation as a teacher.

“Today we can only give thanks for having had small share in the privilege of sharing in this most wonderful and lovely human being. 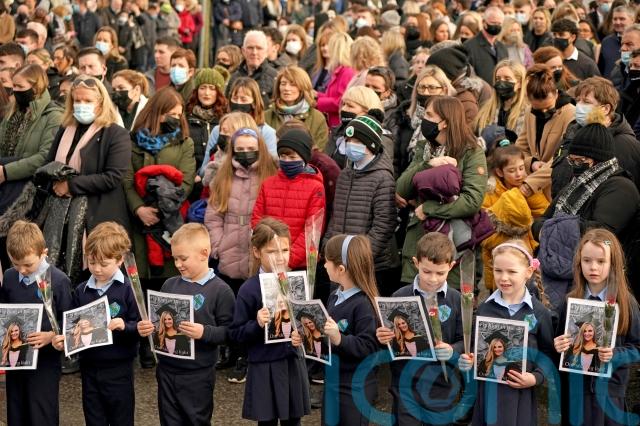 “Today we share our love, our grief, our faith and our comfort with the Murphy and Leonard families.”

Children outside the church held photographs of Ms Murphy and roses. The message next to Ms Murphy’s image read: “Fly high in the sky, Our shining light.”

Screens were set up in Killoughey community centre and Kilcormac/Killoughey GAA pitch to cater for large crowds at the funeral.

Representatives from Ms Murphy’s local GAA club as well as from her old school were in attendance at the parish church of Saint Brigid.

Schoolchildren provided a guard of honour outside the church prior to the funeral. A number of children also held fiddles and tin whistles.

Ms Murphy’s sister paid tribute to her on social media.

Amy Murphy described Ashling as the “light of our lives and the heart of our family”. 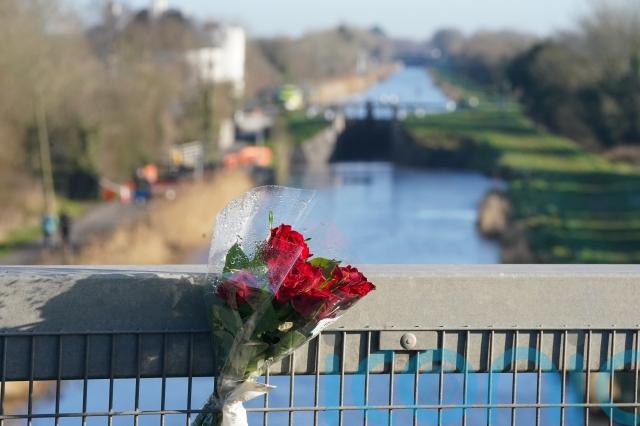 Ms Murphy’s parents Raymond and Kathleen, and siblings Amy and Cathal and her boyfriend Ryan are among the chief mourners.

Schools across Ireland observed a minute of silence in her memory.

Vigils have been held across Ireland and the world to remember Ms Murphy and to call for a change in tackling gender-based violence.

It comes as gardai investigating the death of Ms Murphy renewed an appeal for information, saying “significant progress” has been made in the murder probe.

Gardai released a description of a man they want to speak to in relation to the teacher’s death.

They have asked anyone who saw a man dressed in a black tracksuit top with no hood, black tracksuit bottoms with a large white stripe or white writing on the side and black runners to come forward.

Officers have asked members of the public whether they saw this man walking in the Tullamore area, or if they gave the man a lift last Wednesday evening. 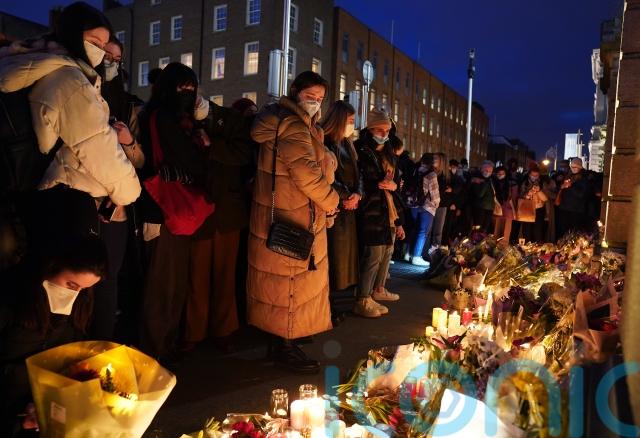 The public has also been asked if they noticed the man loitering at any location or “involved in any activity which drew your attention”.

Police said that “significant progress” is being made but would not confirm any specific details.

It comes as they identified a new person of interest, who is believed to be receiving treatment in hospital in the Dublin region.

As their investigation continues, gardai believe the development of DNA profiles will form an integral part in the search for Ms Murphy’s killer.

Police appealed to anyone who has not made contact with the investigation team and who has any information to come forward.

Gardai said in a statement: “We are now asking for any member of the public who was on the Grand Canal Way on the morning or afternoon of the January 12 between Digby’s bridge and Ballycommon to contact the investigation team. 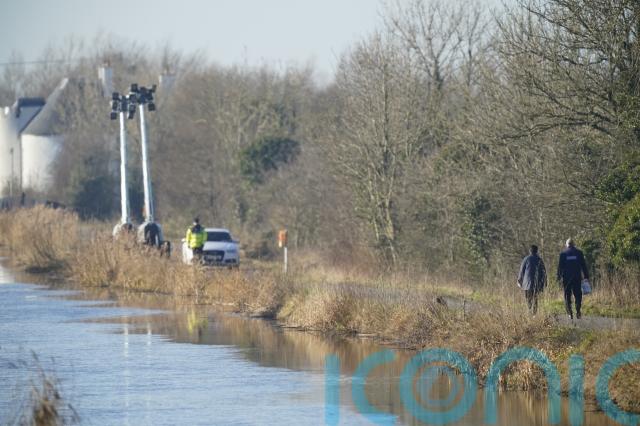 “Whether you think you saw anything or not, please contact gardai in Tullamore.

“We continue to appeal for any information on a Falcon Storm mountain bike with straight handlebars and distinctive yellow/green front forks prior to 4pm on Wednesday and in the previous days and weeks.

“We are now asking for people in Tullamore to think about last Wednesday after 4pm and not to confine their thoughts to the Falcon Storm mountain bike.”