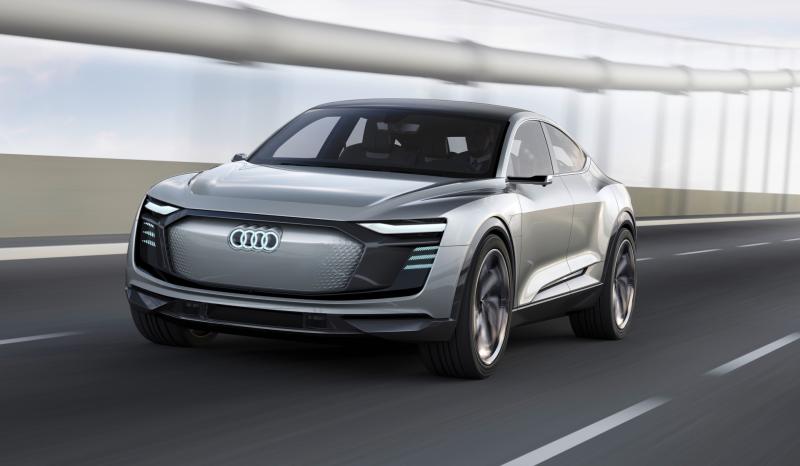 Audi has unveiled an innovative new electric concept car at the Shanghai Motorshow. Sporting Audi’s signature design and cutting-edge technology in the guise of a coupé, the four-door Gran Turismo Audi e-tron Sportback concept comes with a 429 BHP electric drive.

Classic Audi elements combine with an array of trendsetting details including, a powerful yet emotive stance on the road tailored to perfectly complement the technology and package of the electric drive.

The Audi e-tron Sportback represents an important milestone for Audi along the road to electric mobility. Rupert Stadler, Chairman of the Board of Management, AUDI AG, confirmed, “Our Audi e‑tron will be starting out in 2018 – the first electric car in its competitive field that is fit for everyday use. With a range of over 500 kilometres and the special electric driving experience, we will make this sporty SUV the must-have product of the next decade. Following close on its heels, in 2019, comes the production version of the Audi e‑tron Sportback – a striking coupé version that is thrillingly identifiable as an electric car at very first glance.”

The e‑tron Sportback uses a configuration that will also be adopted in future production Audi models with all-electric drive; one electric motor on the front axle and two on the rear power all four wheels, transforming the high-performance coupé into a quattro in typical Audi style. 429 BHP of power – which can even reach 496 BHP in the boost mode – provides a fitting level of propulsion, with a sprint from 0 to 100 km/h achieved in just 4.5 seconds. With the battery’s energy content of 95 kilowatt-hours, its range is in excess of 500 kilometres (NEDC).

Similar to the e‑tron quattro concept, Audi’s e-tron Sportback concept car incorporates a liquid-cooled lithium-ion battery, which is positioned between the axles below the passenger compartment. This installation position provides for a low centre of gravity and a balanced axle load distribution of 52:48 (front/rear). This gives the sporty SUV outstanding driving dynamics and driving safety compared with other vehicles in the segment. The battery can be charged by the Combined Charging System with dual connections for alternating current (AC) and direct current (DC).