The absolutely 'eggstraordinary' story of an Offaly farmer's hens 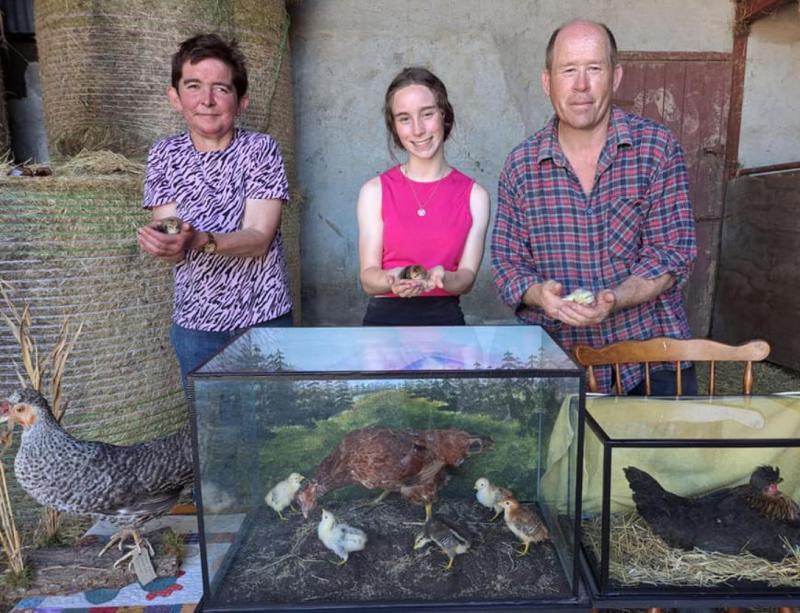 Pictured l. to r. are Anne, Emma and John Dolan with their three taxidermied birds (from left) Ruby, Marmalade and Sally.

SALLY, one of Offaly's most extraordinary hens, has returned home to her final resting place in the Dolan family farm just outside Banagher.

Sally rose to fame after hatching two clutches of chicks in 55 days in 2019. However, she sadly passed away last February at the age of five.

Unable to part with his beloved champion hen, John Dolan decided to immortalise Sally and enlisted the services of taxidermist Jim Corcoran from Ballyroan, Co. Laois.

Sally has now returned home and has been placed, in John's words, beside her best friends Marmalade and Ruby.

“Marmalade was a three-time world champion,” he explained. “She had an average of five clutches of chicks a year and hatched 181 live chicks before passing away in 2019.” Marmalade was a red mottled leghorn and passed away at the age of four and a half.

John used Ruby as a showbird.

He said 85% of hens do not hatch at all and the ones who do would be pushed to hatch twice a year.

“Every hen,” he continued, “loses their hen feathers in the month of October or November and they stop laying for six weeks but Marmalade for some unknown reason never lost her hen feathers. She produced chicks during the snow, frost and even during Hurricane Ophelia with its noise and thunder.”

Hens can live to between 12 and 14 years but unfortunately Marmalade and Sally passed away at young ages.

John, who is now in his early 50s, has been looking after hens since he was a child. When I visited his home, his farmyard was busy with a large number of chickens walking hither and thither, of several different breeds. Some of these hens and cockerels were of beautiful and relatively rare breeds.

Just a couple of weeks ago John showed me his latest high performing hen. This is Fine Cut Little Chip who produced in mid-July an unusually high number of chickens, twenty-two, who are all, at the time of going to press, alive and well.

John thinks that the reasons his hens hatch so many chicks is a combination of good breeding, hen whispering and porridge (Flahavan's) and Oats (Liffey). He explains his hen whispering as being “words of encouragement.” The good breeding is from decades of breeding on the family farm going back to the 1970s.