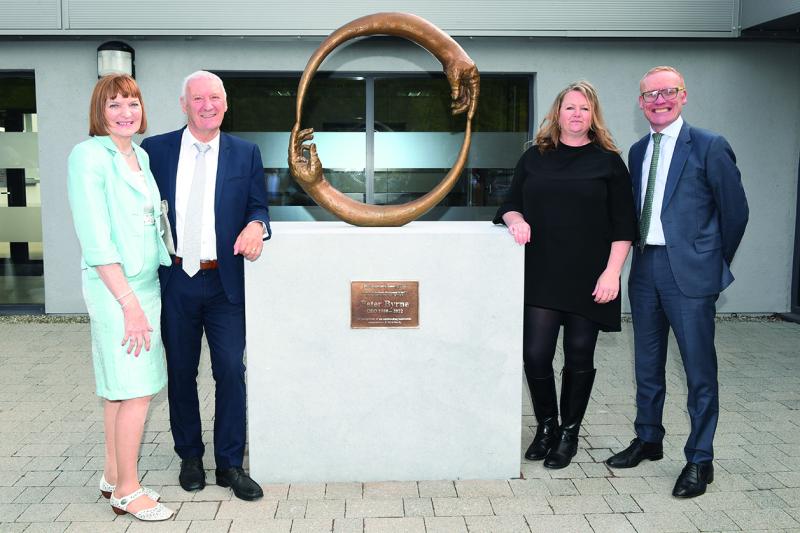 A SYMBOLIC retirement presentation was made to Peter Byrne, former CEO of FRS Network, at the FRS Network HQ, Roscrea, Tipperary, on Friday April 22nd 2022.

A bronze sculpture named ‘The Co-operative Hands of FRS’ was unveiled to a crowd of over 130 people including, FRS board members, former chairmen, management, staff, Peter’s wife Joan and their seven children, their partners and spouses and seven grandchildren.

The artist behind the magnificent bronze sculpture was Jen Donnery who said, “it has been an honour for me to undertake this sculpture commission in recognition of the accomplishments of Peter Byrne. The intention of the piece was to retain the original concept behind the company logo as a symbol of Peter’s leadership, spanning 40 years as CEO of FRS. The 'Hands' represent the ethos of the FRS Co-operative which have featured in the company logo design since the early 1980s.”

In his acceptance speech Peter said, “to say that I am gobsmacked is an understatement. When the invite came to the house and mentioned that there would be a presentation, I thought it could be a watch, but even the best Swiss watches in the world breakdown, but I can’t ever see this piece breaking down. Thank you to Jen for designing it and to the organisers for coming up with the idea. I am really grateful and shocked, but I could not think of anything better and I am truly honoured that it has been placed here at the FRS office in my name.”

Vice Chairman, NCFRS, Tim Maher, countered, “I’m on the board 27 years and I never heard Peter Byrne say he was ever gobsmacked so we have done what we set out to do.”

Chairman, NCFRS, Francis Fitzgerald said, “Peter’s legacy will be felt for generations in the great careers he has helped start and build. He has helped grow the organisation from a small office in Roscrea to one of the most respected organisations in Ireland. He has guided us through the difficult times of the 1980’s, the recession of 2008 and Covid. Thank you, Peter, for your integrity, dedication and hard work spanning over 40 years.”

Peter’s successor Colin Donnery, Chief Executive Officer, FRS Network, thanked Peter for all he has done for him and the staff of FRS throughout the years and said, “planning this day was difficult to nail down with Covid but we got here in the end and it was important for us to have this day in honour of Peter and to wish him the very best on his retirement.”

Artist Jen Donnery explained the process of creating the sculpture and said, “Initial drawings explored the challenges of conveying a two dimensional logo as a solid form with a timeless quality that would sit in harmony with its surroundings whilst referencing the history of the company under the guidance of Peter Byrne.”

“Bronze casting is an ancient fine art technique and most suitable for creating a resilient, permanent object of the highest quality. The Bronze Art Foundry in Dublin provided advice at each stage of the process. I created a wire armature on which to sculpt the “hands” in clay. This took several weeks of modelling and remodelling until I established the form and texture I was aiming for. From the artist’s model, moulds were crafted which were then used to reproduce the model in wax and further ceramic moulds were made into which the molten bronze was poured by the Foundry.

“Once all the bronze components were assembled, a patina was applied until the required depth of colour was achieved. The project was very much a collaboration between artist and foundry. A plinth was sourced from McKeon Stone, Kilkenny, who cut and polished the limestone before FRS installed it in position. Bronze Art Foundry installed the sculpture on site and mounted the cast bronze inscription to complete a six month process.”

The presentation was followed by a reception dinner at the Racket Hall Hotel, Roscrea, Tipperary where a number of colleagues, friends and family made heartfelt speeches to Peter.