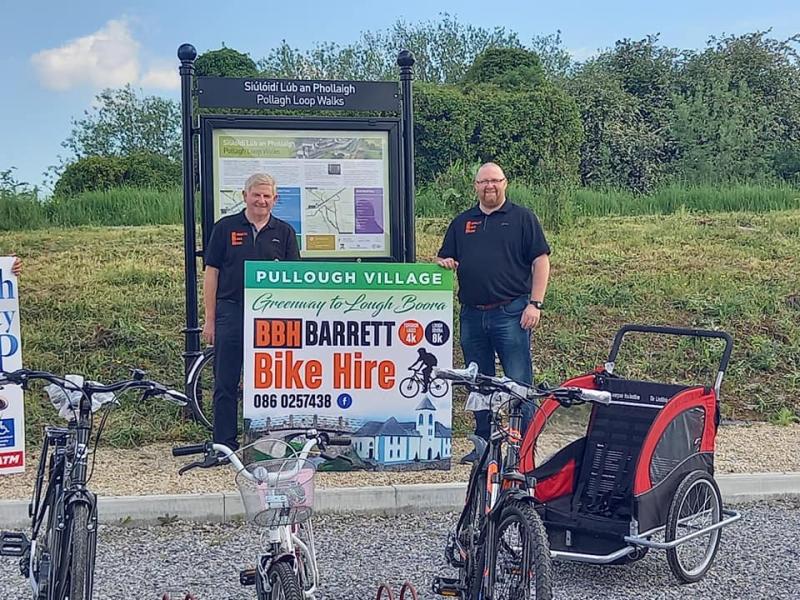 Pat Barrett (left) and his son Paddy, pictured in Pullough in May.

A MAJOR new tourism project is being planned for Kilcormac, which will include a small tourist train from the town to Lough Boora.

The group behind the project, the Kilcormac Development Association, has put significant work into their plans, which is part of the branding of Kilcormac as "The Gateway to Lough Boora".

The tourist train will have two carriages. It will be a road vehicle designed to look like a train. It will bring tourists from the Community Centre to Lough Boora, and will stop at former Bord na Móna machinery on display on either side of the road. The train will also go to St Cormac's Park which is an important part of the Boora story.

The KDA wants to transform Kilcormac, in people's minds, into being the gateway of Boora.

The group is to receive €420,000 from the government for its tourism project and needs to provide €80,000 in matching funding, which it hasn't yet raised.

Cllr John Leahy praised the KDA for its vision, energy and tenacity. “The process of applying for funding is very tedious. KDA had to write 20,000 words in its submission to the department and then the submission guidelines were changed by the department on six occasions.”

Last April KDA announced that it was delighted to launch visitkilcormac.com, a new website to highlight the activities and attractions in the town and surrounds. This tourism site is acting as a guide for visitors and natives for things to do on their doorstep and provide a window into the rich history of the area.

“This is part,” said the KDA statement, “of a series of projects the Kilcormac Development Association are leading that recognises Kilcormac as the gateway to Lough Boora Discovery Park, one of Ireland's great outdoor tourist destinations. The website and overall brand project ‘Kilcormac, The Gateway to Lough Boora’ is supported by REDZ (Rural Economic Development Zone) funding through Offaly County Council.”

After demolition Shannonbridge site will be used for electricity storage