Birr's blind Leviathan and the quest for aliens 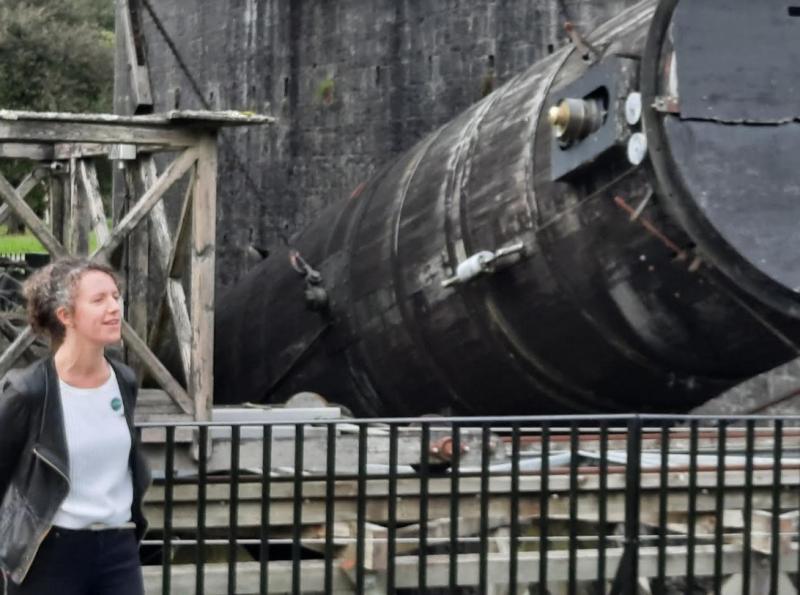 Aine Flood of I-LOFAR beside the Birr Leviathan

On the night of June 22, 1999 Sir Bernard Lovell became the first man to examine the skies above Ireland through the restored Birr Leviathan. It would be hard to think of a more fitting candidate for this privilege. Sir Bernard was one of the most distinguished and famous radio astronomers of his generation. He was the first Director of Jodrell Bank Observatory, from 1945 to 1980.
Jodrell Bank hosts a number of radio telescopes as part of the Jodrell Bank Centre for Astrophysics at the University of Manchester. The observatory was established in 1945 by Sir Bernard, who was a radio astronomer at the university, to investigate cosmic rays after his work on radar in the Second World War. The observatory has since played an important role in the research of meteoroids, quasars, pulsars, masers and gravitational lenses, and played a big role in the tracking of space probes at the start of the Space Age.
“Yesterday,” wrote the late Seán MacConnell in the Irish Times edition of June 23, 1999, “a new six-foot mirror and accompanying optical system were installed at the recently refurbished telescope in the castle grounds. Last year the restored wooden structure was brought back to the site, and yesterday a new mirror, of nickel-coated aluminium alloy and weighing a mere 1.5 tonnes (half that of the original) was lifted into place...The work was supervised by Mr David Brooks, an optics expert with University College London. He has been working on the mirror for almost a year...The telescope will be the centrepiece of the historic science centre as it remains the largest reflector telescope in western Europe.”
Seán MacConnell's headline for his article was an excellent one - “The Leviathan of Birr has its sight restored.”
Sadly, its restored sight didn't last very long before it became blind again. For a number of years following, its operational mechanism continued to function, but now this too is no longer in use. The operational mechanism features giant chain links and massive blocks. It's a metal structure featuring 150 tonnes of iron castings. Cast iron emerged in the mid-1800s when new industrial processes were invented. Its use became widespread during the Victorian era, for example in railings, because of the ease in which it could be moulded, but it was rarely used decoratively. The operational mechanism seems to still be in good shape but there are health and safety worries about it so they stopped using it a number of years after the Leviathan's restoration in the 1990s. The system, when in use, is able to move the telescope up and down, left and right.
During the Astronomy in Birr Walking Tour on a recent Wednesday evening, our tour guide Áine Flood, said there is hope that the Leviathan will be renovated, thereby receiving a new lease of life. Many people realise that being able to view the stars through this telescope, and see what the Third Earl of Rosse could see, would be a big tourist draw. However, in spite of the obvious nature of such a development the situation remains unchanged.
The same day as the Walking Tour, Alan Hill revealed his Birr Interpretive Strategy report, during which he mentioned the exciting possibility of creating an encased stairway to the top of the partially collapsed tower at old St Brendan's Church on Castle Street. Listening to him I thought that it would surely be possible to create a similar encased structure at the Leviathan which would allow tourists to view the night-sky safely, even from a height.
Áine Flood is the only astronomer based at the moment at the Castle's radio telescope. The radio telescope is much less interesting to look at than the leviathan, but its science is anything but dull. Áine gave us a fascinating talk about the science, including the nature of radio waves, which are the longest wavelengths on the electromagnetic spectrum. The radio telescope is called I-LOFAR. I-LOFAR is the Irish station in a European-wide network of state-of-the-art radio telescopes, used to observe the Universe at low frequencies (10-240 MHz). Birr is a very good location for a radio telescope because here, unlike much of continental Europe, there is little radio-wave interference from commercial or military sources. I-LOFAR is part of the SETI programme (Search for Extra-Terrestrial Intelligence) and it's therefore possible that humanity's first contact with extra-terrestrial intelligence might happen in Birr. Humanity has been monitoring the skies for ET signals for decades, but with no results. Frustrated, some researchers want to start transmitting signals towards nearby stars with possible habitable planets in a plan called “active SETI”.