IRELAND WEATHER: Weather forecast for Ireland for the weekend from Met Eireann 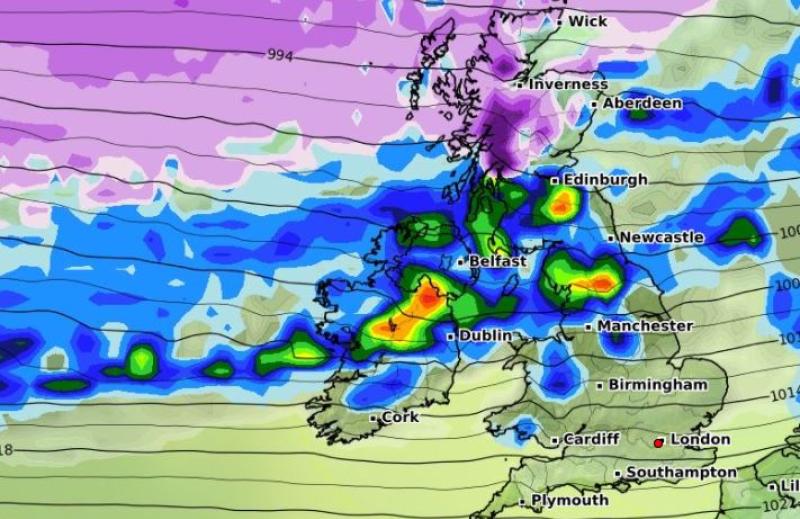 The latest Met Eireann weather forecast for Ireland says that the weather will be rather unsettled with rain or showers on most days.

According to the latest weather forecast for Ireland from Met Eireann, Saturday looks set to be a rather cloudy and wet day with outbreaks of rain. The rain will be most persistent in the west and north of the country with the best of any dry or bright interludes in the east and south. Maximum temperatures of 8 to 11 degrees in strong west or southwest winds along with gales on exposed coasts.

Outbreaks of rain will continue overnight on Saturday, gradually pushing south over the country allowing colder and showery conditions to move in across northern counties. A contrast in overnight temperatures from north to south ranging from 2 or 3 degrees in Ulster to 9 or 10 degrees along the south coast. Fresh and gusty westerly winds.

According to the latest weather forecast for Ireland from Met Eireann, Sunday looks set to be a chilly and blustery day with widespread showers and some sunny spells. A few hail or sleet showers will occur over hills in the north. Highest temperatures of 6 to 9 degrees in fresh westerly winds.

A few showers early on Sunday night along with rather chilly conditions initially with lows of 1 to 4 degrees. However, cloudier and milder conditions with scattered outbreaks of rain will move across the country later in the night.

According to the latest weather forecast for Ireland from Met Eireann, Monday is expected to be a mild and breezy day with plenty of cloud and some patches of drizzle. There will be bright spells also, especially across the east of the country. Maximum temperatures of 11 to 14 degrees in strong southwest winds. Persistent rain will develop in the west and north overnight with drier conditions elsewhere. Mild with lows of 10 to 12 degrees.