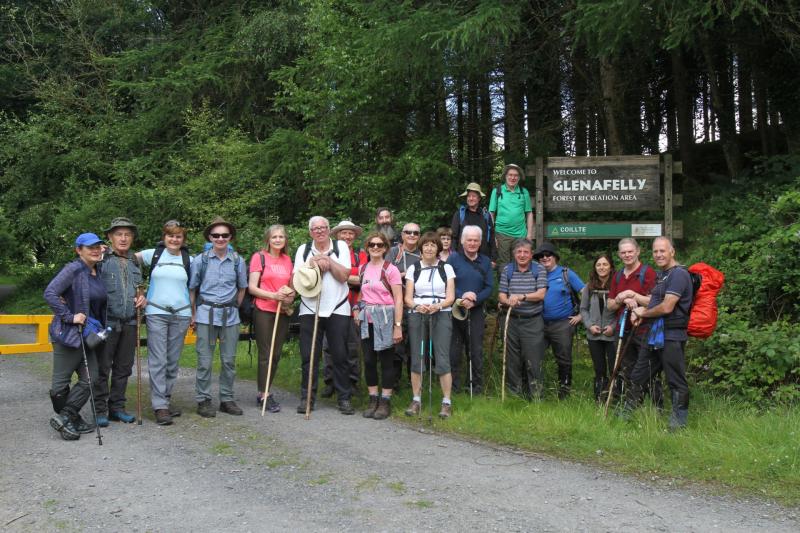 Members of the Ardara Hillwalking Club celebrated their 20th anniversary with a three hour walk through the Glenafelly forest in the Slieve Bloom Mountains on Sunday last. Pic: Rose Mannion.

ARDARA Hillwalking Club recently celebrated its twentieth anniversary which had been delayed for two years due to the Covid-19 pandemic.

The club was founded in 2000 when a number of walkers, who had been exploring the Slieve Blooms for a few years, saw the need for a club that would organise and guide walks to cater for the growth in interest in hillwalking at the time.

At the inaugural meeting in Cadamstown, Paddy Heaney and Paddy Lowry were elected co-presidents, Mick McGrath was the first chairman, Joan Roche was elected secretary/treasurer and Jemima Craven became the first and youngest paid up member. Pat Culleton and Paddy Heaney suggested that the club be named after the 16th century Ardara Bridge on the Silver River just below Cadamstown.

The club has members from all over the Midlands with over 130 members on the text system and walks take place every fortnight. While most of the walks are in the Slieve Blooms, one of the founding principles of the club was that walks could be held anywhere and so over the years the club has organised walks all over Ireland from Donegal to Kerry, from Connemara to Wicklow and all places in between.

Further information on the club can be found on the website at ardarahillwalking.com or by contacting the present chairman Eddie Spain on (087) 9240 652.