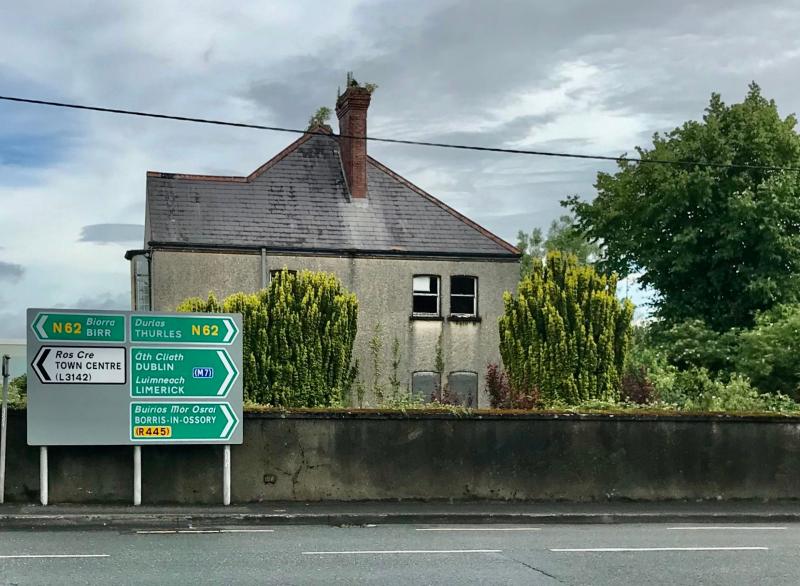 A landmark residence in Roscrea is abandoned and left to fall into disrepair for over two decades and upsetting residents in the area.

Ard Erin House on Roscrea's Old Dublin Road is steeped in history and has a commanding presence over the town's busiest approach road.

The beautiful building is one in a litany of shameful waste in Roscrea, where several exceptional properties are teetering on the edge of falling into irreparable disrepair during a housing crisis and the issue is causing headaches for residents of the area; upset by the once majestic building becoming an eyesore in a beautifully manicured area.

The Old Dublin Road has received much attention from the local Tidy Towns group and residents spend their money and time maintaining the neighbourhood to a very high standard, yet the once beautiful Ard Erin House looms over their efforts and is beyond their influence.

Now starting to become a magnet for anti-social behaviour, the noble and intrinsically beautiful building is still salvageable and could be returned to it's former glory.

Once the home of Thomas Dooly, Clerk of the Union and whose wife was fatally shot during the Civil War in August 1923, the house has been boarded up since 2009.

“It needs to be brought back into life” one resident told the Tribune, adding that derelict buildings are magnets for anti-social behaviour and that the Gardaí were called to the site in recent years to disperse intruders.

The iconic building greets traffic into Roscrea from the northern direction and one local resident says the building has become a blight on a Heritage Town.

"We're afraid if it is let slip any further it will be the final nail in the coffin for another of Roscrea's beautiful buildings", they told the Midland Tribune.