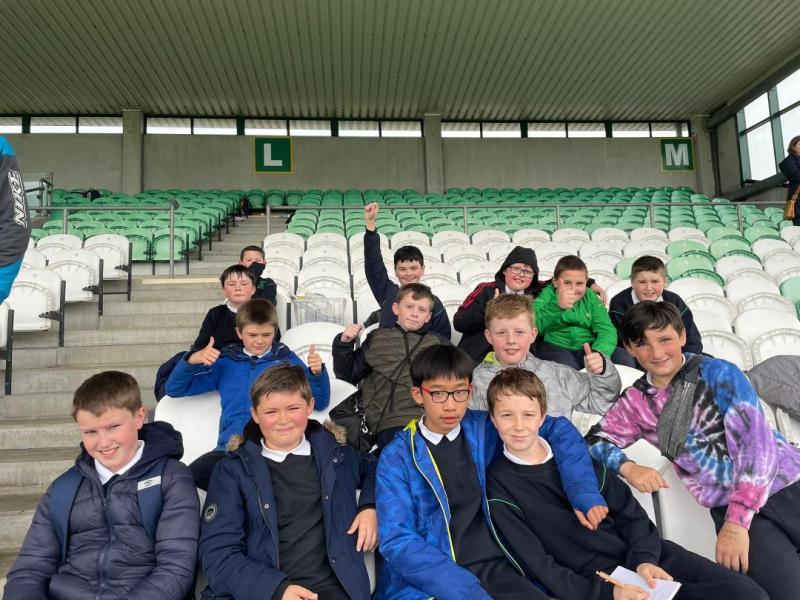 IN early October, our teachers Ms Pilkington and Mr Cunningham introduced our class to VEX Robotics. We had a zoom call with Ray Bell from Offaly County Council to tell us all about this year’s game and competition.

Before we built the robot we had to dismantle the old robots. We were very interested about it and we started building it in October. There were three groups, two groups building the robots and one researching with the iPads about it. It took us a good while to build the robots because we were making mistakes but that’s how we figured it out too!

Two months later, we finished the robots and Ben, Jack and Yixuan built the arena with the help of Ms Makim. We finished it in two days. After that week we started coding with Mr Cunningham.

As part of Engineers Week, We also let other classes have a go at the free-driving, they were all really good at it.

When coding began Ben, Yi-Xuan, Jamie and Fionn went down first. Everyone got a turn at coding, some boys liked the coding part and others found it hard.

From then on, Ben and Yixuan did most of the coding with the help of Mr Cunningham. It took us three weeks to finish the codes because we made a few mistake along the way.

A week later, everyone came down to see who was the fastest at free-driving. We took the scores of every boy, and we practised for three days. Finally, we were ready for the competition.

On May 6th, we arrived at Tesco car park. We left for O’Connor Park, Tullamore, normally home to Offaly GAA but for today, home of Offaly VEX Robotics. It took us about half an hour to get there. We had to play eight matches, the first ones to play were Darragh and Kyle, they did great. When Hugh and Jack played, the robot’s arm fell off, they still scored fifteen points. Then we had some time and we explored the place, we visited the Virtual Reality Station. There was also the Microsoft Dream station where you could get a pen and notebook for free.

We took part in the Coding competition and our codes worked so that was great. We were really surprised when we were in the top 10 final. Callum and Ryan played the last final. They had to get 32 points and they got…. 39 points! The presentation finally came and we were runners up, we were delighted to come 2nd out of 48 schools. The winners were only one point ahead of us. But it was okay, we were happy with 2nd place. We went home. It was 3.40pm when got back to Tesco car park. It was a great experience and we were really happy.

We have to thank Ms Pilkington, Ms Makim and Mr Cunningham for all their help with our VEX Robotics journey. We also need to thanks Ray Bell and all in Offaly County Council for organising this project.