Her coin design impressed the judges 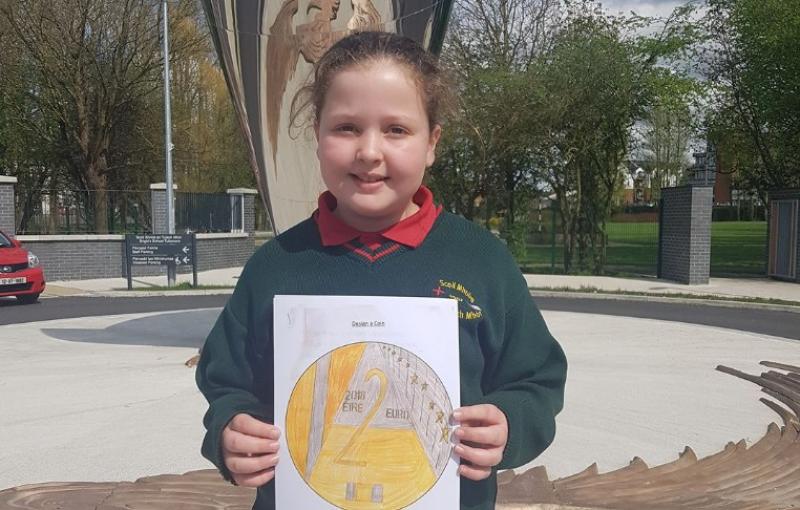 A student from Scoil Mhuire, Tullamore has been declared the regional winner in the Central Bank’s 75th Anniversary School Art Competition.

Aoife Malewka's coin design impressed th ejudges and scooped the Leinster title in the 3rd-6th class category in the school art competition run by the Central Bank to mark its 75th anniversary.

Aoife Malewka will now be invited to the prize giving ceremony at the Central Bank of Ireland in May where she will see her design up in lights.

A total of seventeen winners from across Ireland were chosen on the basis of designs submitted for coins that were inspired by significant people or events from the past 75 years.

Schools were allowed to submit a maximum of 8 entries and over 500 individual entries were received.

Regional winners were chosen from each of the four age categories, with a total of17 all-Ireland finalists from four regions across primary and secondary levels. Winners will be invited to a prize-giving ceremony at the Central Bank of Ireland on May 22.

Deputy Governor of the Central Bank of Ireland Sharon Donnery said: “We had a fantastic response from primary and secondary school students to our coin design competition, with hundreds of individual entries received from across Ireland. It was a pleasure to judge the competition and we were delighted to see all the creativity and talent on display across the designs all the way from junior infants to Leaving Certificate students."

"Students were clearly inspired by a wide range of events from across the last 75 years, which is seen in the range of winning entries. We look forward to seeing winning designs printed for display in the Central Bank visitor centre and welcoming visitors to come and see them," she added.