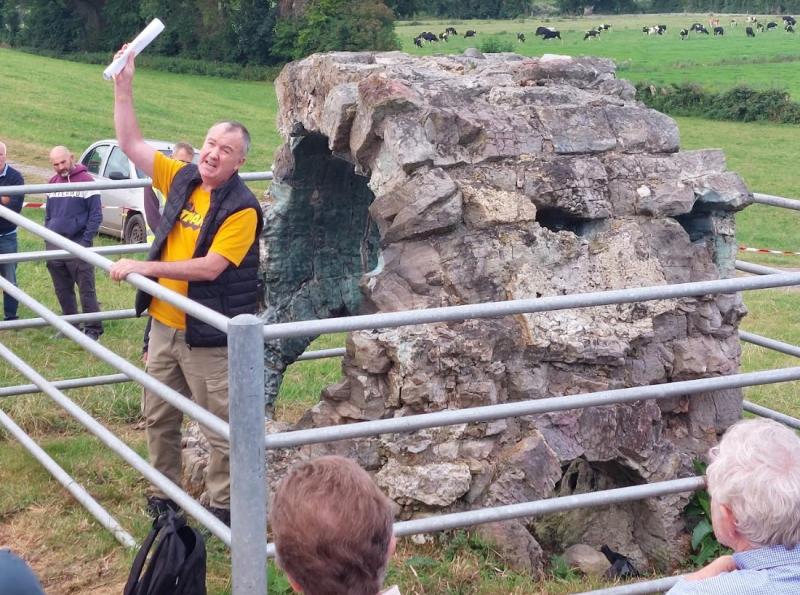 Archaeologist Caimin O'Brien giving a great talk during Heritage Week about the Glasshouse near Shinrone.

THE 17th Century Glasshouse near Shinrone is unique because it is the only one of its kind which is relatively intact.

During Heritage Week, Caimin O'Brien gave a talk at the site and it was great to see so many people turn out for the event, because it showed that the word is really getting around as to how special this structure is. It's heartening to see local communities prizing the artefacts and structures in their midst, rather than being indifferent or, even worse, being destructive towards them.

Chatting to a couple of people after the talk they asked me if the Glasshouse is a National Monument and therefore a protected structure. Well, I made inquiries and I was told by those in the know that it is thankfully a National Monument.
Caimin O'Brien has been researching the Glasshouse for three decades and his knowledge during the Heritage Week talk really shone through. It was something of a tour de force.

He said the Glasshouse is “a very significant site in Offaly. It was covered with vegetation which had to be removed and it required a bit of conservation work. The structure is stable.” Caimin thanked the landowner for allowing groups to visit the structure on his land. “The glasshouse is situated on a working farm,” he remarked. “Generations of farmers have kept the glasshouse intact.”

Caimin said he carried out two archaeological excavations here at the turn of the century. “Excavations can sometimes be boring, but here the results were very interesting.”

During the years 1620-1660, Offaly was one of the main glassmaking centres in Ireland. Around this time, French Huguenot glassmakers, such as Phillip Bigoe and Annanias Hensey, fleeing religious persecution, came to the county where they constructed these small glassmaking factories known as glasshouses. Annanias Hensey built the Shinrone glasshouse in Clonlisk Wood, 156 Irish acres of oak and ash, which provided fuel for the furnace. The wood-fired glass furnace at Glasshouse, Shinrone is the only upstanding furnace in Ireland, Britain and France. Today the surface of the furnace interior glistens with the distinctive blue-green glass colour often described as 'forest-glass'. Wood-fired glass furnaces were replaced by coal-fired glass factories in coastal ports, such as Dublin, Cork and the famous Waterford factory, bringing an end to the period when glass was made in Offaly. During the upheaval of the 1640s the Henseys suffered religious persecution once again and they abandoned the Shinrone Glasshouse.

When working, the furnace would have burned at 1,300 degrees celsius, a temperature which would take over a day of burning wood to reach (about a tonne of wood was needed for one firing). Glass for windows and bottles (including shaft and globe wine bottles) were made here. Carts and horses would come down a cobbled road and collect the glass which was often destined for the wealthiest houses in the land.