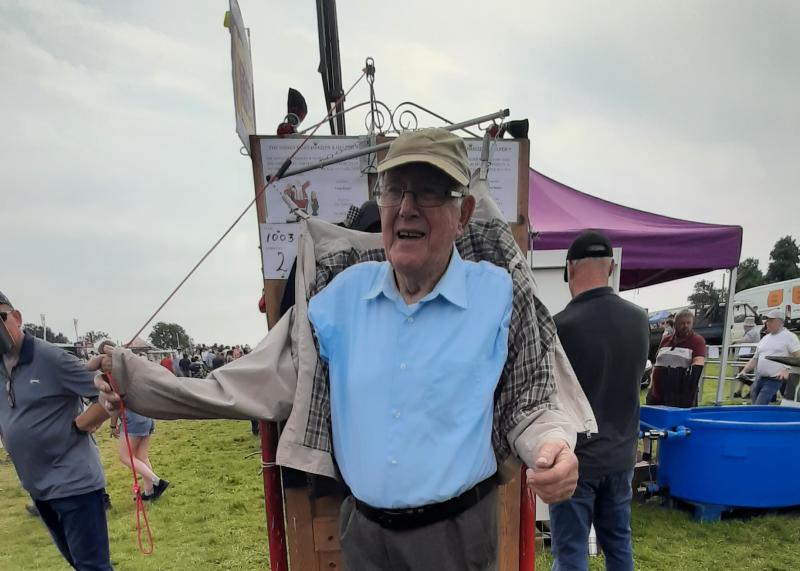 TONY Bergin is living proof that age really is no barrier. At 92, the retired dairy farmer from Roscrea is a father of invention, still coming up with award winning innovations designed to make everyone's lives easier.

At this year's Tullamore Show, he is showcasing a gadget which enables him to put on a coat unaided, a device which splits blocks of firewood with minimum effort, and a hand held roller-cleaner which wipes slurry from cattle slats.

That hasn't stopped him from using anything he can get his hands on to conjure up more and more ingenious gizmos.

Demonstrating how his coat-donning device works, he said: “It's a very simple thing.”

A hanger protrudes from a rail, allowing the wearer to slip their arms into the sleeves. “When I had no one to help me put on the coat I said I'd make this thing.”

And after chopping some timber he said: “It's to keep the women quiet in the morning when there's no firelighters.”

He previously won an award for an invention which helps him put his socks on.

Tony is a veritable veteran in the long-running National Inventions Awards at the Tullamore Show.

“I'm 25 years coming here and they gave me a recognition statement before,” the nonagenarian remarked.

Rosemount native Siobhan Jordan from the agriculture and food development authority Teagasc is a judge in the inventions competition.

“This inventions section is about supporting people to showcase their inventions in different categories. We have labour saving, making things better and safer on farms, renewable energy, young inventors and the latest devices in agri-tech,” she outlined.

“Farmers are the best at spotting problems and also coming up with solutions.”

The inventions section at the show has expanded over the years and now features many commercial exhibitors.