Distinguished Irish regiment to be remembered in centenary commemoration in Offaly 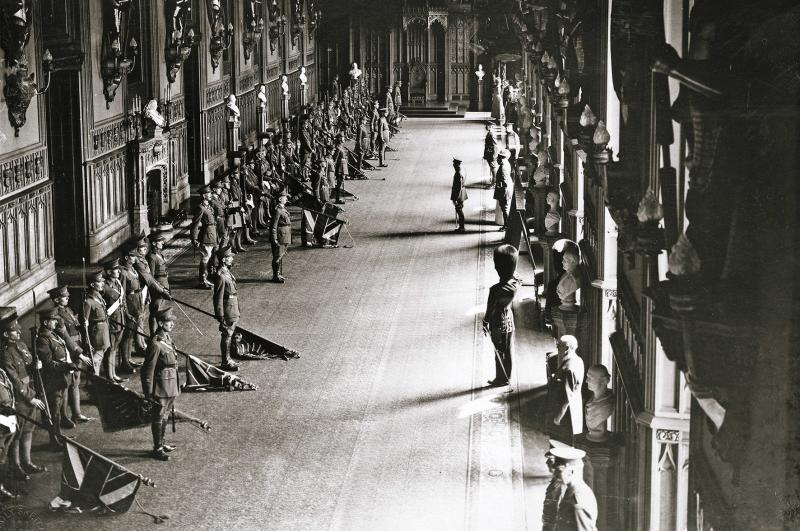 The Leinster Regiment was disbanded 100 years ago.

MEMBERS of the Prince of Wales’s Leinster Regiment Association will gather in Birr on Sunday August 7th to mark the disbandment of the distinguished Irish regiment one hundred years ago.

The highlight of the centenary weekend will be a Ceremony of Commemoration at the Memorial outside the regimental Depot in Crinkill.

Led by Templemore Pipe Bank, members of the Association will fall in behind a Colour Party and Regimental Standards of the Leinster Regiment Association and the other four disbanded Irish Regiments and parade from the Military Cemetery to the monument, which was unveiled in 2013.

Present will be Minister of State at the Department of Finance, Sean Fleming TD., who will represent the Government. He will be joined by local political representatives, Offaly County Council and Birr clergy.

The welcome address will be given from a Reviewing Platform by the Chair of the Leinster Regiment Association (LRA), Col. Mark Weldon.

Noted Birr historian, Brian Kennedy, will outline the lead up to the disbandment of the regiment and the laying up of regimental Colours at Windsor Castle in June 1922.

Before King George V on June 12th, 1922, the Regimental Colours of the Prince of Wales’s Leinster Regiment, the Royal Dublin Fusiliers, the Royal Munster Fusiliers, Connaught Rangers and the 18th Regiment of Foot Royal Irish Regiment (& South Irish Horse) passed, in the words of His Majesty, “to be kept forever in the care of the King and his descendants.”

In St George’s Hall, the King told the representatives of the disbanded Irish infantry regiments: “You are called upon to part with them today for reasons beyond your control and resistance. By you and your predecessors these Colours have been reverenced and guarded as a sacred trust - which trust you now confide in me.

“As your King I am proud to accept this trust. But I fully realise with what grief you relinquish these dearly-prized emblems; and I pledge my word that within these ancient and historic walls your Colours will be treasured, honoured, and protected as hallowed memorials of the glorious deeds of brave and loyal regiments.”

During the First World War, about 2,000 Leinsters were killed and scores injured in fierce fighting on the Front. Four soldiers earned the highest decoration for valour, the Victoria Cross, and many others received recognition for their distinguished service.

LRA member and respected authority on the regiment, Stephen Callaghan, will tell those in attendance of the hand-over of Crinkill Barracks to the Irish Free State authorities and what happened subsequently.

Following a Piper’s Lament, wreaths will be laid at the base of the Memorial by Government, County Council, the Leinster Regiment Association and other Irish disbanded regiments.

The Exhortation and Last Post will be followed by a minute’s silence. The Dedication will be given by Col. Weldon and an ecumenical blessing will be performed by local clergy.

The Sunday August 7th event will conclude with a March Off and playing of the National Anthem.

LRA Vice-Chair, Denis Kirby, says the Crinkill event will be the highlight of this, the centenary year of the end of the Leinsters.

Mr Kirby adds: “On behalf of the Association, I’m indebted to everyone who has worked so hard to make this weekend possible, particularly those ‘on the ground’ in Birr and Crinkill. Considerable effort has gone into marking a truly historic military event in the history of Ireland. All are welcome to attend.

“We are also in a recruitment phase and would welcome new members to the fold. I would encourage anyone wishing to join to have a chat with us before or after the event in Crinkill.

“There is a long military tradition in Birr and South Offaly. The Leinsters mostly recruited from five designated counties in the Irish midlands but men also joined from Cork, Belfast, Dublin and, of course, England.

“The Regiment was short-lived. It was set up in 1881 and had a lifespan of just forty-one years, but you can say it had an eventful history in many theatres of conflict including South Africa.

“For many soldiers, laying up of Regimental Standards in 1922 was akin to a great personal tragedy. Our Association will keep the flame burning brightly as we look forward to commemorating and honouring the men who served.”

Earlier on Sunday, the Leinster Regiment Association will hold its AGM in Oxmantown Hall. It will be followed by a public lecture at 11.30am on Martin O’Meara VC from Lorrha by historian, Gerard O’Meara.