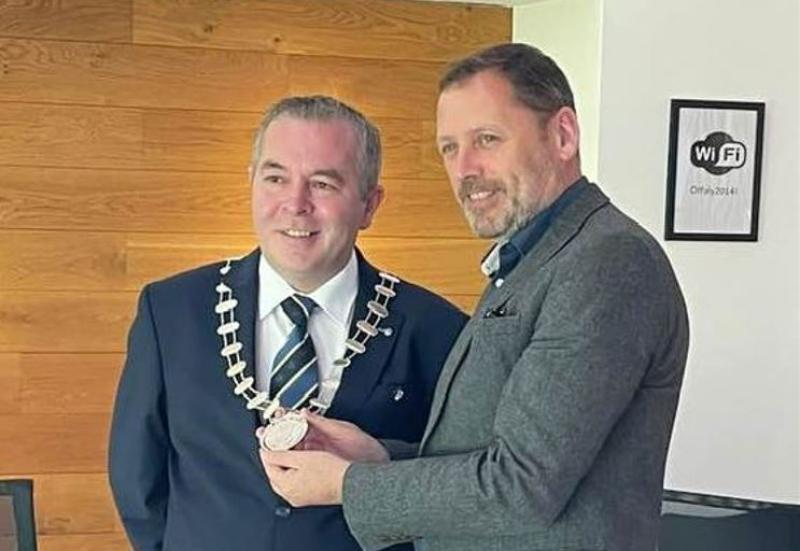 Cllr Moran was proposed by Cllr Danny Owens and seconded by Cllr Tony McCormack. A visibly emotional Cllr Moran said becoming Cathaoirleach is “an honour and a privilege”.

He immediately praised the outgoing Cathaoirleach Declan Harvey who had shown “enthusiasm, humour, honour and commitment in the role”.

Cllr Moran said he was looking forward to the year ahead, a year which will be dominated for a while at least by the cost of living crisis.

He promised that he won't be biased towards his home town but will remain fairminded and focussed on the whole of Offaly. He said he's very proud of Offaly, which he called “Ireland's hidden gem.”

Cllr Owens outlined Cllr Moran's political career. He stood as an independent candidate in both the 2004 and 2009 local elections, but despite respectable showings was not elected.

In 2012, he joined Fianna Fáil and was elected in 2014 and again in 2019, topping the poll on the latter occasion in the Tullamore Municipal District election for Offaly County Council. Cllr Owens said Cllr Moran topped the poll because he was so energetic and hardworking as a local politician.

Cllr Owens said he believes Cllr Moran will continue to be a very hardworking councillor and will be an excellent advocate for the county. He said the day is a very proud one for Cllr Moran, his friends, family and supporters.

Cllr Moran said he's looking forward to progressing the Town Centre First project in Clara. He said working in collaboration with all stakeholders he hoped the Clara Town Team will devise “a plan that ensures Clara prospers even more in the future.”

He thanked all his family, supporters, fellow councillors, Deputy Barry Cowen and the voters who elected him. However, he reserved a special word of thanks for two people: his No 1 supporter, his mother, and someone who had been with him “in good times and bad”, his brother, Padraig. Cllr Moran was accompanied to the chamber by his daughter Ella and son Matthew.

Tributes were paid by the councillors to the outgoing Cathaoirleach Cllr Declan Harvey. Cllr Harvey said that when he was elected as Cathaoirleach of Offaly County Council last June, he was “overjoyed to have this prestigious honour bestowed upon me.”

He said his priorities as Cathaoirleach during the last year were: to ensure that Offaly was recognised as a county where there is space to explore, space to innovate, and space to grow; and to recognise the important work undertaken by our communities, the length and breadth of the county.

“While adhering to public health guidelines,” continued Cllr Harvey, “I relished the opportunity to meet with volunteers at various functions and I was delighted to recognise their ongoing efforts at the Volunteer Recognition Awards and at the civic receptions and civic honour events I hosted. Looking around the room, there is not one person here that would disagree with me as I acknowledge the community and voluntary sector within the county.

“Over the last two years we have seen what is best in our country and county - our community groups and voluntary sector engaging with those in need. This is something we should all be proud of.”

Cllr Harvey said Offaly is a resilient county, which continues to innovate and adapt as it deals with the challenges faced during the Just Transition process.

He said it's important to achieve a Just Transition that protects the health, wellbeing and economies in the county; and it must be an inclusive process for all.

“Supports,” he continued, “provided by our Local Enterprise Office have ensured Offaly is recognised on a national stage while the use of Offaly Library branches to provide local retraining supports should be applauded. Our Housing Department continues to support local communities, including a retrofit scheme.

“Throughout the year, I chaired meetings in hybrid format and, most recently, I was able to host, chair and present in-person events. I wish to complement the management and staff of Offaly County Council as they continued to provide front line services and lead with supports during such challenging circumstances.

“Chief Executive Anna Marie and the Senior Management Team, Tom, Sharon, Mark and Stephen supported by Senior Executives, you should be proud of the work delivered by engineering, administrative and specialist staff under your direction. The work programme set out in our annual service delivery plans, based on our agreed strategic priorities in the corporate plan, are executed ot the highest standard with very strong governance and oversight.”

The outgoing Cathaoirleach also said he was delighted to have progressed so many projects under the Town and Village Renewal Scheme and to welcome various Ministers to Offaly to showcase these projects; as well as partnering with other agencies and Laois County Council to showcase the new Mountain Bike Trail in Kinnitty.

“I also enjoyed the opportunity to represent Offaly during our business network opportunities earlier this year with the IDA and Tourism Ireland in New York.

“The return of local live entertainment secured with the Department's funding and matched by Offaly County Council has been a great boost to our communities - these events have brought back life to our streets. The innovation and buzz surrounding Offaly County Council’s Vex Robotics STEM programme for schools has illustrated that our passion for science, technology, engineering and maths is well embedded in our DNA.

“The Challenging demands on an elected representative also impact on our our families so I wish to pay special tribute to my own family. Thank you for your constant support.”

He congratulated his councillor colleagues elected in each of the three Municipal Districts - Cllr Niall Feighery Cathaoirleach Tullamore, Cllrs John Carroll and Clare Claffey, Birr and Cllrs Robert McDermott and Noel Cribbin in Edenderry. To my successor Cllr Frank Moran I wish you success in this prestigious role.
“Offaly has so much to offer and I look forward to supporting the people of Tulamore Municipal District as Leas Cathaoirleach in the year ahead. The opening of the Esker Arts Centre in the latter part of 2022 is something we can all look forward to.”

Cllr Harvey said his biggest enjoyment as Cathaoirleach was being out and about and meeting people at events. He said he enjoyed his term as Cathaoirleach. He thanked the councillors for their kindness and helpfulness towards him. “I wish you all continued good health. Go raibh mile maith agaibh.”

On behalf of the Fianna Fáil group Cllr Eamon Dooley said it had been a tough couple of years because of Covid and Cllr Harvey had handled the challenges very well during his term.

Cllr Tony McCormack said he and Cllr Harvey “started this journey in 2009 when we became town councillors on the now defunct Tullamore Town Council. You can be very proud of what you achieved during the last 12 months.”

Cllr John Foley said that on behalf of the “Foley group” he wanted to congratulate Cllr Harvey. “You did a fair job. You represented the county with distinction right across the board. In the week before you became Cathaoirleach you telephoned me and said you were putting your name forward. You weren't ringing me for my support. You were simply making a courtesy call. That's a good sign of a person's character.”

Cllr Danny Owens said Cllr Harvey always had “a smile and a happy demeanour about you, and people like that.”

Cllr Peter Ormond said: “There is no greater honour than being the first citizen of your county.”

Cllr John Leahy said no one wore the chain of office as much as Cllr Harvey did. “You had great pride in the office.”

Cllr Liam Quinn said Cllr Harvey had “a very positive demeanour, which counts a lot in politics because it can defuse things.”

Cllr Ken Smollen said Cllr Harvey's disposition reminded him of Bertie Ahern. “I could see you challenging for higher positions,” he remarked.

Cllr John Clendennen commented that the outgoing Cathaoirleach made sure everyone was “in the photo and no one felt left out. You brought good spirits and a good atmosphere into a room.”

Cllr Neil Feighery said Cllr Harvey's energy reminded him of a number of well-liked politicians over the years. “You are a solid and kind colleague.”