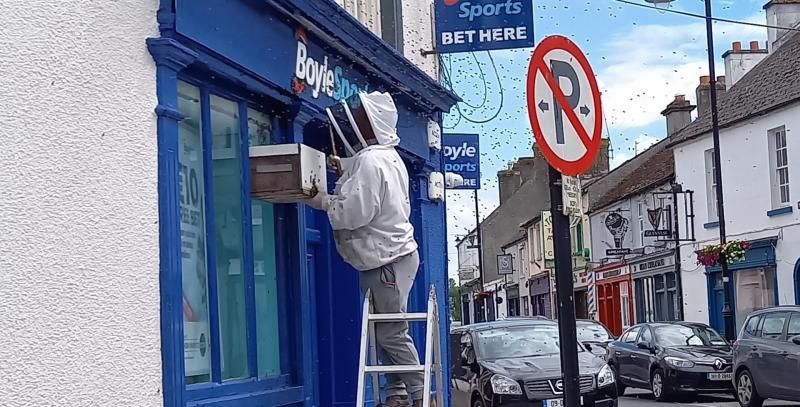 Keith Wolfe beginning the process of moving the bees.

A LOCAL beekeeper helped to remove a swarm of bees from a street in an Offaly town on Wednesday.

The bees suddenly appeared on Connacht Street in Birr during the day on Wednesday and quickly attracted the attention of passers by. Local beekeeper Keith Wolfe was called to the scene and he quickly brought the situation under control.

The excitement began around midday when suddenly hundreds of bees were spotted flying around in an area of Connacht Street at the junction with Keele's Arch. People stood in amazement watching as the sight of the bees flying around filled the sky, while passing cars slowed to look at the spectacle.

After a while all the bees then began to gather in one spot at a doorway outside the Boylesports bookies office. They were quickly identified as honey bees and it was felt that the Queen Bee was on the move and all the others followed.

When Keith Wolfe arrived on the scene he explained that this is swarming season and bees could be on the move for a number of reasons, such as the place they were had become too crowded and they just moved on.

He set about the task of moving the bees and was suitably attired for the job. He set up a box with wax panels and climbing up to where the bees were amassed began moving them into the box. He said once the Queen was in the box, the others would eventually follow.

Having moved the bulk of the bees into the box, he set up the box on the footpath as some of the bees continued to fly about. He said over the course of the afternoon, once the Queen was in the box, all the other bees would eventually go into the box and he said he would return later in the evening and move the box to a new location.