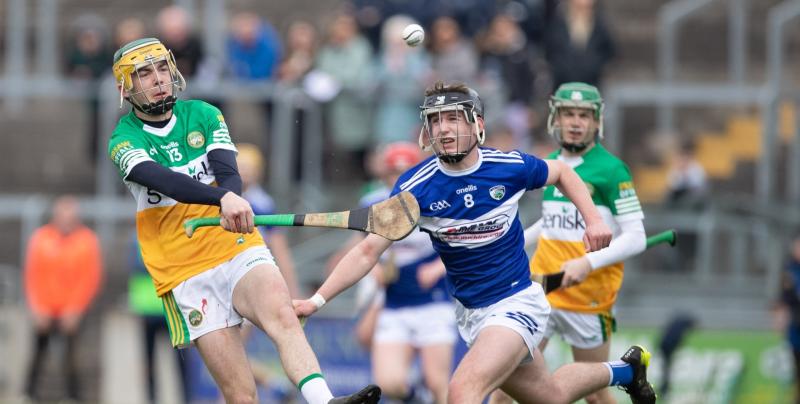 Daniel Hand, back available for Offaly

UNDER no illusions about what an All-Ireland Minor Hurling Championship title could mean for the county, Offaly minor hurling manager Leo O'Connor is understandably looking no further than Friday's All-Ireland semi-final against Clare in Thurles.

When it was suggested that an All-Ireland minor hurling title could change everything for the game in the county, the Limerick man agreed:

“It is huge but all we can do is take it one game at a time. Friday is the most important thing and getting over that. We would give anyhing to play in an All-Ireland final and we would rather that than what iffs. They don't count. It is all on the day and we have to perform.”

O'Connor is in the happy position of having a clean bill of health. Kilcormac-Killoughey's Daniel Hand is back after missing the Leinster semi-final and final wins over Dublin and Laois through illness.

Hand had been on the team before that and asked would it be hard to change a winning formula now, O'Connor said: “He gives us loads of options anywhere in the attack. In the last two to three weeks, he has put in a huge effort, as has everyone. We are in a good position overall and now we have to get our work levels and intensity back up.

“Everything else is fine. We have had three weeks of tough training and now we are getting ready for Friday night. We have the physical work done and are now trying to get the mental side right. It is a huge step for these lads. It was a huge achievement to win Leinster but an All-Ireland is massive.”

Offaly had a few weeks to prepare after their Leinster final win over Laois while Clare, Galway and Laois played a round robin series for the other two All-Ireland semi-final berths – Laois bowed out while Galway play Munster champions Tipperary in the other game.

The manager agreed that those extra games may be an advantage to Clare.

“It could be a disadvantage to us when you look back on it now. We trained and played a couple of games in Kilkenny, Limerick and Coirk but these were games when we used everyone on the panel and gave as much game time as we could.

“When you are carrying players, you have a responsibility to give everyone their best opportunity. We got games but the intensity levels were nowhere near championship. Our in-house games were as intense. We are not in a bad place but we would have loved a match two weeks out which Clare had to get our confidence levels back up.”

With only Offaly, Tipperary, Clare, Galway and Laois left in the championship, getting challenge games was a big problem in the last month plus. Offaly played county teams in Limerick and Cork but both these opponents had a large number of U-16 players as they build towards next year. They also played James Stephens of Kilkenny and according to O'Connor, that was their most beneficial game as they used a variety of players.

He is looking forward to the Friday evening fixture in Semple Stadium. “We would play at 9am on a Wednesday morning if they wanted us to,” he smiled.

Offaly go into this on the back of a super win over Laois in the Leinster final – a rare, magical evening with almost 20,000 people in Portlaoise's O'Moore Park. Was it hard to bring the players back down from that?

“It was one of those great evenings where the GAA ate into people's lives. It it something Offaly people will always remember and Laois. The atmosphere was incredible, the match was delayed and you had all that. It will go down in the annals of history. You had almost 20,000 people there including children who were let in free.

“It was a brilliant occasion. We were back training on the Wednesday night, we did a recovery session. It was just how we managed it. They are a good bunch of lads. They are very well disciplined and this is just a stepping stone to the future. There won't be that type of crowd on Friday night but there will be a fair Offaly following there and it is important that they come out. You saw the benefits of the crowd in Portlaoise. A huge roar greeted every Offaly score and there was an electic atmosphere. Players feed off that.”

O'Connor is not worried that Clare's hurling fortunes have been much better than Offaly's over the past couple of decades.

“It doesn't make any difference. They are two U-17 teams. It is Clare's eight or ninth game. They had a round robin system, a Munster quarter-final, semi-final and final and then two more round robin games. You can't buy that experience. I know we are unbeaten. We have five played and five won. We will not let up. We are always testing ourselves. It is a winner take all situation and it will be a great experience. Hopefully we will get over the line. If not, it won't be for want of trying.”