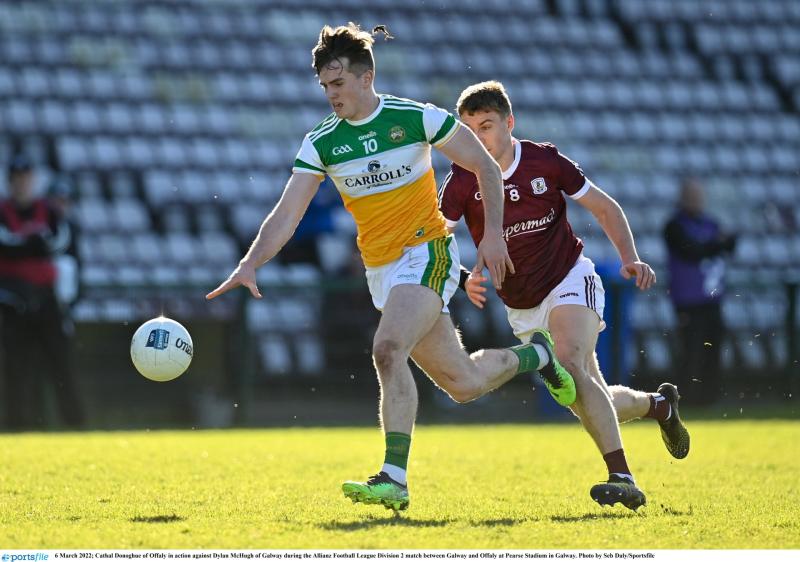 Cathal Donoghue, unlikely to play for Offaly against Wexford.

WITH injury problems mounting, Offaly will be on high alert when they travel to Wexford for the Leinster Senior Football Championship opener on Sunday at 3pm.

Manager John Maughan has concern about the availability of two of his ace attackers, first cousins Niall and Ruari McNamee. Both have hamstring injuries that could limit their mobility or at worse, rule them out of action and Offaly can't afford the loss of either.

Ruari McNamee went off clutching his leg in the recent Eugene McGee memorial match win over Longford while Niall McNamee suffered a strain in a recent challenge game against Cork.

Both players, however, are on the mend and may be fit to take their place. A number of players are carrying knocks and they will be given every chance but Jack Bryant is definitely out and Cathal Donoghue is very doubtful.

Niall McNamee, the most experienced member of the team, is playing some of the best football of his long career and he remains the side's key forward. Ruari McNamee has also found some of his best form this year. A very natural, composed forward, his influence has become more profound in games and he has been doing very well in a playmaking role as well as contributing good scores.

Even if those players were ruled out, Offaly will still be favourites to beat Wexford but it is a real banana skin for them with a lot of pressure on – another forward Jack Bryant is out with a hamstring injury while Cathal Donoghue hurt his knee in that recent challenge game. There were immediate fears that he had did his cruciate but a scan this week will determine the extent of it – he got a similar injury last year but it turned out to be a much more minor cartilage one. Donoghue would have been close to starting and while he has plenty of developing to do at the top level, he is a definite loss and reduces the options at Offaly's disposal. A cruciate injury would be a devastating personal blow to the player and the recovery from a cruciate operation is an arduous one. An outstanding young forward Cian Farrell is still recovering from a cruciate operation last year and he has been a huge loss to Offaly.

There has been a considerable gap between the counties in the past year. Offaly competed in Division 2 of the National Football League and were very close to retaining their status, suffering an unlucky defeat to Cork on the last day while Wexford were in Division 4 and were well short of promotion as they finished sixth in the table.

Only Carlow and Waterford were below them and it does suggest that Offaly should have the measure of them. Championship, however, is a different story and league form always goes out the window.

This is not a 50-50 game but it is not a 100 miles from one and it is one where an upset win is a distinct possibility. Offaly have blown hot and cold throughout the league. On their day, they can be very good but there are also days when they are very bad. It can swing either way for them and this is a hugely important game for Offaly.

Two other players have also gone from the panel. Bracknagh's Ciaran Donnelly and Kilclonfert's Cathal Mangan told management recently that they plan to travel in the coming months. While team management have been disappointed at this, they have accepted their decision, wishing them the best of luck and acknowledging that the past two years have not been easy for young people with lockdowns etc.

There is a big carrot for both counties here. The winners have a home game against Dublin and while this will almostt certainly spell the end of the road for them and send them into the Tealteann Cup, they would both like a crack at the blues.

It is a very strong desire for Offaly. They would like to see where they are against Leinster's dominant force and even if the result is not pretty, at least you know. The visit of the Dubs would also be a big day for the county as well as giving a big economic boost to Tullamore.

Offaly, however, won't be thinking one step past Wexford and they will have to be very much on the ball here. There is another factor at play here. John Maughan has been a very steady voice at the helm, instilling discipline and fitness in Offaly and they have come on under his watch. This could also be his last season in charge and bowing out against Wexford would undermine a small bit of the good work that has taken place.

Offaly play Kildare in the Leinster U-20 football semi-final on Thursday evening. If Offaly lose here, these players will be available to play for the seniors. They are unlikely to start at this stage and it may be too late for them to feature but a couple of them would be a good option to have, particularly Lee Pearson and John Furlong – of course John Maughan and everyone on the senior squad will want Offaly to beat Kildare and will be glad if there is no decision to make about any U-20s.

Thursday evening will dictate that one. Offaly are in the process of turning a corner. There is some exciting talent waiting on the wings but they need the more established players to be strong and able to win games of this nature. It is what championship football is all about – performing under pressure, showing character and leadership, emptying the tank. Expect a very motivated Offaly team to take the field. It won't be simple and Wexford will give them plenty of it but Offaly should still be good enough to advance.