Ashling was 'an inspiration to us all' says school principal 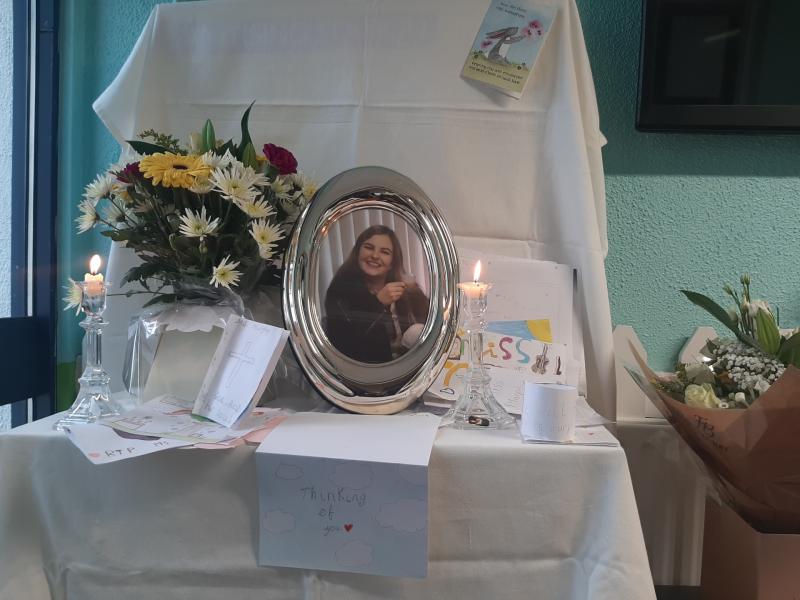 THE principal of the school where murdered Offaly teacher Ashling Murphy worked has paid a heartfelt tribute to his former staff member.

“She was a talented teacher, extraordinary sportsperson, traditional Irish music enthusiast, very active and fit, an inspiration to all,” said Mr Hogan.

“She gave 110% to everything she put her hand to. And the kids and their education was her priority.

She taught a class of 28 boys and girls and those children were today dealing with the sudden loss of a teacher they loved.

“Today was very much about talking, being open and saying it's ok to be sad and have feelings, and say we're all hurting and remember the good things about Ms Murphy,” said the principal

“They all did little notes and lovehearts, poems and prayers and Mass cards and left them in memory boxes.”

He said Ashling's death was devastating for the school and the whole community and he paid tribute to the psychologists who came to provide support.

“The road ahead is going to be tough but I can reassure everyone that the school and the community will always have support services her to cater for the kids, the families, and ourselves, the staff. Because when this new reality dies down it's going to be tough and hard for everyone.”

Ashling Murphy began work in Durrow as a substitute teacher in March 2021 and was then appointed to First Class as a permanent teacher.

Mr Hogan said his thoughts were now with her family and he expressed his deepest sympathy.

“I know them at a personal level too outside of the school through traditional music. I grew up playing music and her family are musical and I know them really well. Words can't describe how to express sympathy to them.”

Mary Daly, chair of the school board of management spoke of the terrible shock and sadness she had felt.

“The loss of any life is tragic but to know a girl after getting her college finished and starting work here, it was just devastation for the whole community and the wider community and worldwide,” said Ms Daly.

“She was the light in shining armour here. That was the feeling from everybody and the little pupils, to see the way they came up so dignified, and to see them go home this evening. It was heartbreaking.”

Fr Joe Gallagher, parish priest of Tullamore, joined the school staff for a period of reflection this afternoon and said that was important “to have that few moments to pray and reflect and strengthen the bonds and support one another and understand how valuable we are to one another and what we can do for one another”.

Fr Gallagher added: “When somebody is pulled out like that all of a sudden it is then we realise how important we are to each other and how we can do so much. It's something that touches everybody very deeply.”

He said the feeling when he heard the news of the tragedy was “surreal”.

“It was unbelievable, it was just a total, total shock,and you think this could just not be true. For it to happen in your own town and a place we all know and walk. You meet so many people down there.

“And to think that she was coming home from school and going out to get a bit of air and exercise and then for that to happen. The whole town is feeling it and it has touched so many people all over the country and we've got messages from so many places, all expressing their sympathy and support and offering their prayers.”