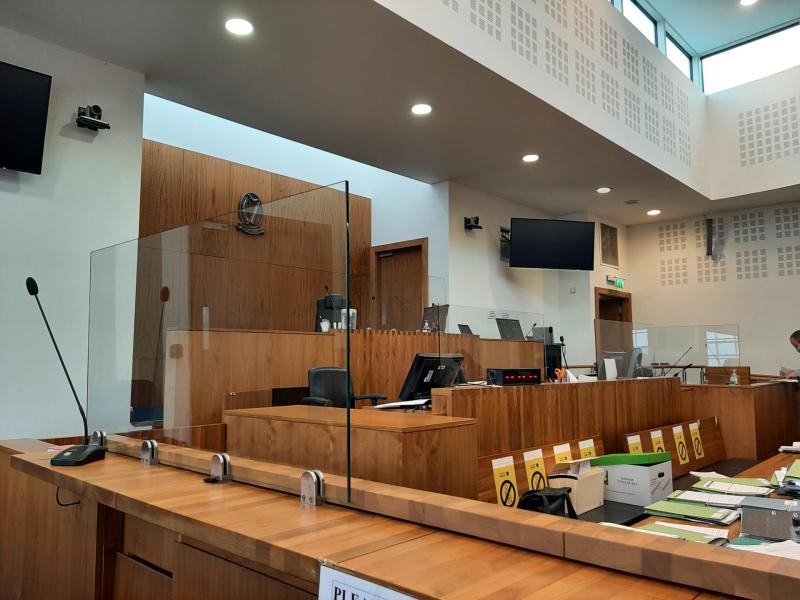 A MAN who had cocaine and four other controlled drugs in Clara was sentenced to 18 months in prison at Tullamore Circuit Court.

Leo Gannon, 41, admitted having drugs for sale or supply to others at 9 Marian Square, Clara on January 30 and November 10 last year.

A variety of drugs were found by gardai including cocaine, oxycodone, alprazolam and dimethylone.

Prosecution counsel Kevin White (instructed by Sandra Mahon, Offaly state solicitor), said the value of the drugs found on one occasion was €8,544 and on the other was €4,200.

Garda Trevor Mullins said white powder was found in a sitting room, along with tablets, when the residence was searched on January 30 and Mr Gannon admitted the drugs were his.

When the premises was searched a second time 60g of cocaine was found and the man said the weighing scales which was also found was used for the preparation and sale of cocaine.

Gardai were told by the accused that he was “in a hole” financially and had to pay drug debt and a mortgage.

He had been working as a doorman and became addicted to drugs and owed upwards of €10,000 in a drug debt.

He was selling the drugs in Dublin and also selling some to friends who would buy some every week but it became harder to make sales during lockdown.

Garda Mullins said the man remarked “I have to change”. He had a previous conviction for a similar offence and had received a suspended sentence in the Circuit Court in April, 2020.

Garda Mullins agreed with defence counsel Aoife O'Halloran, BL, that Mr Gannon had aided the gardai in their investigation.

He had been commuting to a job as a doorman at the Mercantile in Dublin.

When Ms O'Halloran put it to the garda that the accused had come up on the garda Pulse system as someone who would be very helpful to the police in relation to incidents in his workplace, Judge Keenan Johnson said that was a “double-edged sword”.

Judge Johnson said Mr Gannon's work there meant that he was in a position to sell drugs.

The court was told by Mr White that €5,800 was the value of the drugs in the man's previous conviction and he was now before the court for an offence committed while on bail.

Pleading for leniency, Ms O'Halloran said the defendant's mother had accompanied him to court and his family had been shocked by what had happened.

The accused had studied engineering at third level, had opened his own business and worked in sales until 2008.

Since 2010 he had been working in security and was considered trustworthy and responsible.

Ms O'Halloran said Mr Gannon had a 17-year-old daughter by his first wife who died in 2018 but he had become estranged from her because of his offending.

He had two young children with his new partner and had found himself in “significant and mounting debt”, including over €103,000 mortgage debt, half of which was arrears.

When he lost his job he could not service his debt and turned to alcohol and drugs and because he internalised his problems his family did not know about them. He had been storing the drugs in his house.

Judge Johnson heard the man was now doing a HGV course to re-enter the workforce and had engaged with MABS in relation to his debts.

The judge said the fact that Mr Gannon was on bail at the time he committed an offence was a “hugely aggravating factor”.

He said those who engage in this type of activity were peddling misery and the drug problem was particularly bad in the Midlands region.

Judge Johnson noted that a probation report indicated the man was at moderate risk of reoffending but also that he was remorseful, had a good work history and wasn't a “big player” in the drugs industry.

His drug debt had been discharged by his parents.

The offence carried a maximum sentence of life imprisonment and Judge Johnson deemed Mr Gannon's offending to be at the mid-range which would attract a sentence of eight years, which with mitigation he would reduce to five years.

He suspended three-and-a-half years of that for five years and deferred the activation of the remainder until March 1 next because a baby is expected in his family.

When Ms O'Halloran suggested that the sentence be increased but suspended in full, Judge Johnson refused, saying: “I deal with too many people who are victims of drug addiction in this court, day in and day out.”