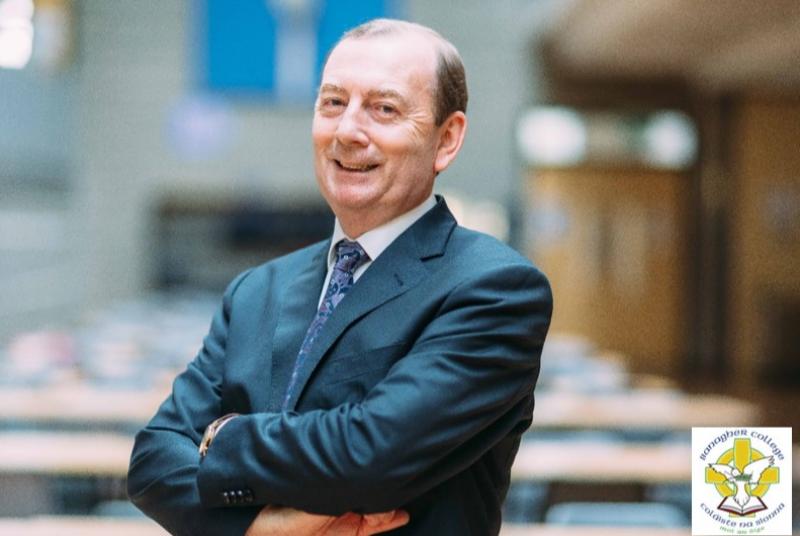 WARM tributes and well wishes have been paid to a popular and highly respected Offaly school principal following the announcement that he intends to retire.

Paddy Scales is the principal of Banagher College, Coláiste na Sionna and he will retire on December 31.

He was appointed as Principal of Banagher College in September 2009. He brought a wealth of experience to the role, having previously served as Deputy Principal in Banagher Vocational School since 1990, having begun his career as a Maths and Geography teacher at the school in 1980.

Mr Scales was a member of the leadership team which oversaw the formation of Banagher College in August 2007 following the amalgamation of La Sainte Union Secondary School and Banagher Vocational School.

As Principal, Mr Scales has overseen the significant growth and development of the school, offering excellent learning experiences for young people in Banagher and the surrounding hinterland. Much credit is due to Mr Scales for exceptional levels of academic excellence, care, and support ensuring that students’ needs have always been to the fore during over forty years of service to the school.

BIG PICTURE GALLERY: Who will you recognise having a wonderful Christmas time at the Tullamore Christmas Market?

Joe Cunningham, Chief Executive at Laois and Offaly Education and Training Board (LOETB), said that Mr Scales has shown considerable commitment to the students of Banagher College over the course of his exceptional career.

He said "Paddy has made a significant impact during his time as Principal at Banagher College, and has expertly guided the development of the school in partnership with the entire school community. Paddy’s vision for an innovative, student-centred school with an emphasis on exceptional learning experiences has been firmly established. His commitment has ensured that generations of families in the local area have benefitted from his dedication to education excellence over the lifetime of this considerable career. He is leaving a thriving school which continues to be the school of choice at the heart of the local community. I wish Paddy the very best in retirement and good health to enjoy it. No doubt, this decision will give him even more time to dedicate to his beloved St Rynagh’s GAA club."

Linda Tynan, Director of Schools at LOETB, thanked Paddy for his significant contribution to the growth and development of the school.

She said "Paddy has been immersed in the life of the school, he is a dedicated and excellent Principal who will be greatly missed by the staff, students and his colleagues at LOETB. Paddy has been an exceptional colleague, always generous with his time and humble in sharing his expertise. I am very grateful to him for his dedication to the students and staff at Banagher College. This truly is the end of an era and l wish him well as he pursues his many other interests in his retirement."
Ms Lily Kinahan, current Deputy Principal at the school, will be acting Principal when students return to the school in January. The process to appoint a permanent replacement as Principal at Banagher College will commence in the spring.