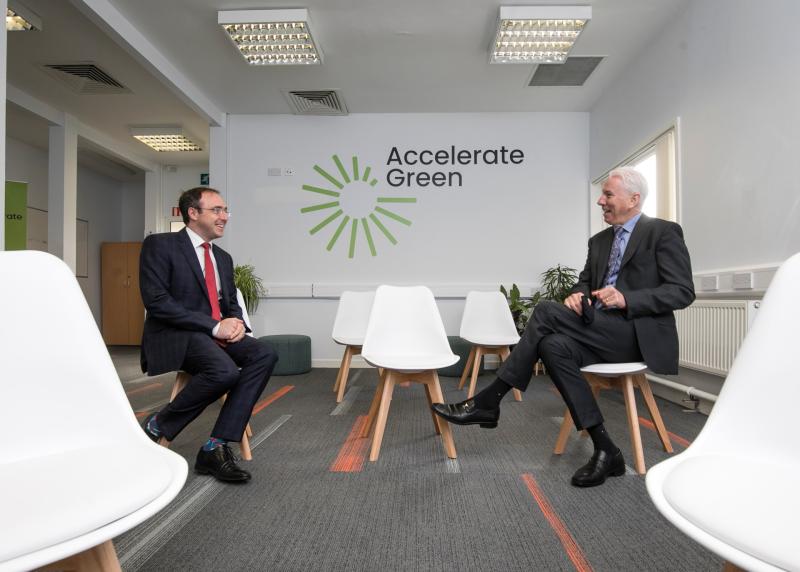 THERE are currently 100 job vacancies at Bord na Mona as it continues its transition from peat production to a climate solutions company.

Mr Donnellan was speaking at the launch of Accelerate Green, a programme sponsored by Bord na Mona which aims to help companies take advantage of the global trend towards a green economy.

Accelerate Green will be based at the former peat workshop in Boora and selected companies are expected to take part in the first of a series of 'hot housing' events there next February.

“The Accelerate Green programme is another important step in creating a more sustainable future for Ireland. As an Irish climate solutions company, helping to lead Ireland towards a climate neutral future, we believe it is important to support scalable companies whose innovations will have a positive impact on climate action,” said Mr Donnellan.

“Sharing our expertise and advice, we can help develop a vibrant ecosystem that places the Midlands region at the forefront of the carbon zero economy.”

The Accelerate Green programme will be run in Boora by Resolve Partners, a consultancy which has previously worked with companies who have raised nearly €100m in investment.

Applications for places on Accelerate Green are already open and will close on December 10.

Resolve Partners director Alan Costello said participating companies will be pushed to “think bigger than they're already doing” and the focus will be on entrepreneurs pursuing a “climate change agenda”.

Mr Costello said a focus on climate change is no longer a “nice to have” but is now a “necessity”.

Resolve Partners said they believed Bord na Mona was a good example of a company which was successfully making the transition from “brown to green”.

“Boora has reinvented itself as an amenity and as an area where we have the Lough Boora Parkland where we have over 100,000 visitors a year coming,” he said.

“Because as we moved from brown to green there was a lot of talk that Bord na Mona could not reinvent itself and Bord na Mona would not continue. I'm pleased to inform you that Bord na Mona has reinvented itself as a climate solutions company to deal with the climate emergency that we have.”

The Accelerate Green programme was officially launched by Robert Troy, TD, Minister for State at the Department of Enterprise, Trade and Employment and he stressed that there was no option but to address the challenges of climate change.

“Bord na Mona has a long rich history in our country dating back to the 1940s of a semi-state who delivered not only economically but socially in the regions it served,” said Minister Troy.

“And it can be difficult and it can have consequences that none of us want to acknowledge but unfortunately we have climate targets that we must achieve and to achieve them we have to make the change.”

“It's about bringing likeminded people together and basically, as far as I can see, [having] a brainstorming session and getting ideas,” said Cllr Hackett.

“What I love is, as a Green Party councillor, is it's about the complete environment. Sustainability is the main word they're all using. I think that's what's vital here.

“If we're building on that, and getting business to build on that as a core, I think that's great news from my point of view and the whole Green Party point of view.”

Monday's initiative from Bord na Mona follows on from their announcement last month of a plan for a renewable energy park across 3,000 hectares in Offaly, Meath and Westmeath.

In July the company said it was creating 1,400 jobs in climate solutions with initiatives in renewable energy including wind, solar, battery and hydrogen, plus recycling and carbon capture.