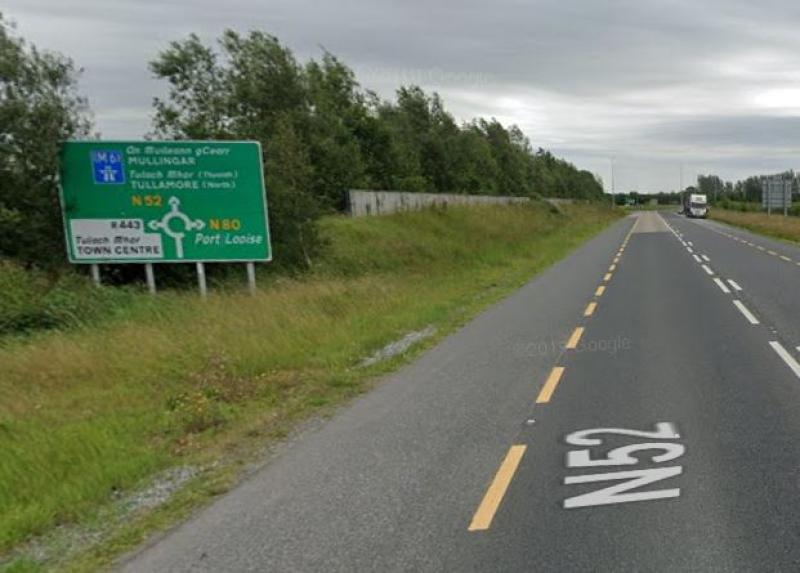 PLANNERS are now considering running the new road between Tullamore and Kilbeggan over farmland to the east of the existing route.

The 'emerging preferred route' of the road was chosen for a number of reasons, including its use of already upgraded sections of the N52.

The N52 is seen as one of the Midlands' crucial transport links as it connects the county town of Tullamore with the M6 Dublin-Galway motorway.

A previous proposal for a new road was shelved during the last recession but increasing traffic volumes have once again seen long-term planners return the project to the drawing board.

The route now proposed is 8.1km (five miles) long and will run east of the existing N52 and will rejoin that road just north of the Offaly/Westmeath county boundary in the townland of Curraghglass. 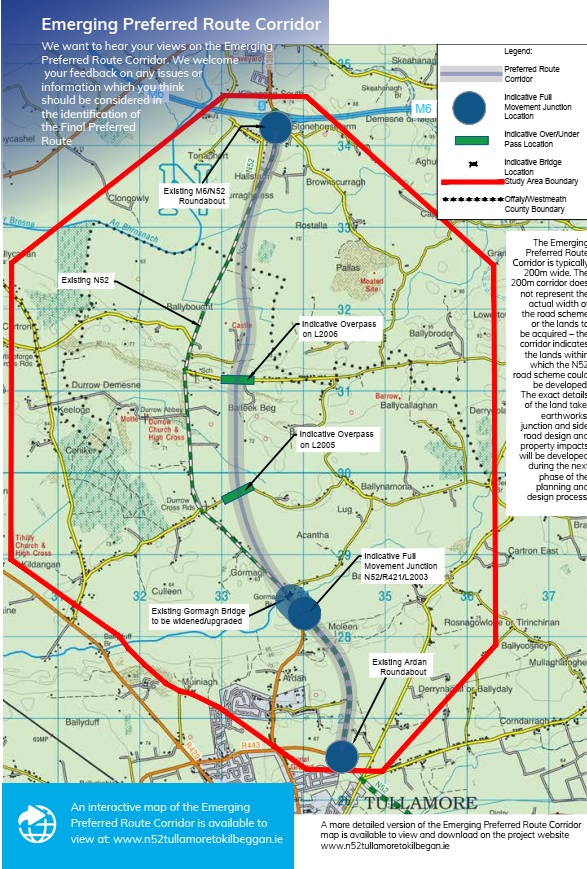 There will be two over passes, one east of the Four Roads over the road to Ballynamona, and another where the new road runs between two residential holdings just east of Durrow church and national school on the High Road.

Consultation with the public began last Friday and on Monday the first of two bookable in-person clinics took place.

Face to face meetings with project engineers can again be booked for Wednesday, September 29 in the Tullamore Court Hotel.
There will be an online consultation with detailed plans available for viewing and a brochure has been posted to people in the area concerned.

The optimum route corridor option was selected after considering the overall benefits and impacts based on six criteria: economy, safety, environment, accessibility and social inclusion, integration and physical activity.

The corridor is 200m wide. “The exact details of the land take, earthworks, junction and side road design and property impacts will be developed during the next phase of the planning and design process,” the planners say.

“We welcome your feedback on any issues or information which you think should be considered in the identification of the final preferred route.”

In a statement, Offaly County Council said: “Delivering this project is a priority. The N52 Tullamore to Kilbeggan Road currently operates above capacity, carrying over 14,000 vehicles per day. Safety is compromised by a narrow hard shoulder and many 'at grade' junctions and private access points.”

Local Independent representative, Cllr Sean O'Brien said he welcomed the route announcement because it brings the matter a stage further.

“Having seen the route I feel that it is a good choice and it does not affect Durrow Abbey. It is important that locals have good access to the new route from the many minor roads in the area and that people can move safely. Safe access to the school and church in Durrow is also vital.  We need to put pressure on to get this project a stage further as it is vital for the community in the Durrow area and also vital for Tullamore,” he said.

"It is important that the current road remains in use and that it will be maintained as local people in the Durrow area use this to access their homes and land as well as access to the school, church and graveyard. Safe access from the current road to the new road is vital and this detail needs to be well planned. The junction at Gormagh Bridge will be important as this gives access to local people from a wide area to link onto the current by-pass and to get into Tullamore.”