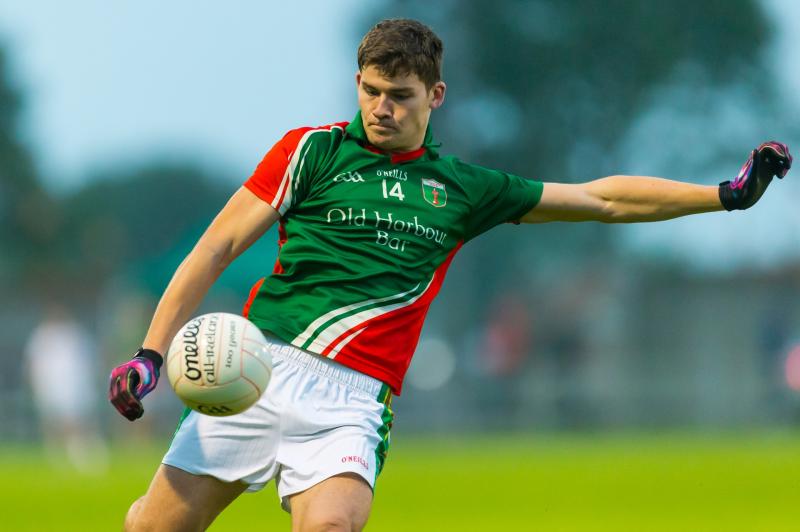 Micheal Mooney was on song for Durrow against Cappincur

DURROW surpassed their wildest dreams when they booked their place in the Offaly Senior Football Championship semi-finals on Sunday evening in Ballinagar.

While the win over Cappincur that secured their last four spot was fully anticipated, no one could have predicted that Durrow would top group 1 and claim the automatic semi-final berth at the start of the year. They did need Rhode to do them a favour by beating Ferbane and that duly happened – a win for Ferbane could have deprived them of top spot on scoring difference.

A sensational first round win over champions Rhode followed by a draw against Ferbane laid the ground work and put them in the happy position of knowing that a win against Cappincur would put them in top place.

At the start of the season, most people would have expected this to be a quarter-final/relegation battle but the reality was entirely different. Durrow were already assured of a quarter-final place before throw in while Cappincur could not avoid the relegation play off – Cappincur will play Bracknagh in that play off.

It has been an excellent season for Durrow and while they are still championship outsiders, they are now only one game from a county final and are dark horses. They have an exciting young team and they showed the way they have improved with the way they answered all questions here.

Cappincur, fighting for their pride, started brightly and scored the first three points but it all went downhill for them after this. Durrow hit back with 1-7 without reply with Micheal Mooney outstanding as he dictated the flow of play. A Terry Byrne goal in the 22nd minute really put them in the driving seat and Durrow went onto lead by 1-9 to 0-7 at half time.

That five point margin was still between the teams at the end. While Cappincur battled hard, they never looked like getting there. Peter Daly led their attack with six points, two from play, but in truth, Durrow coasted home in the second half and weren't in real danger at any stage.