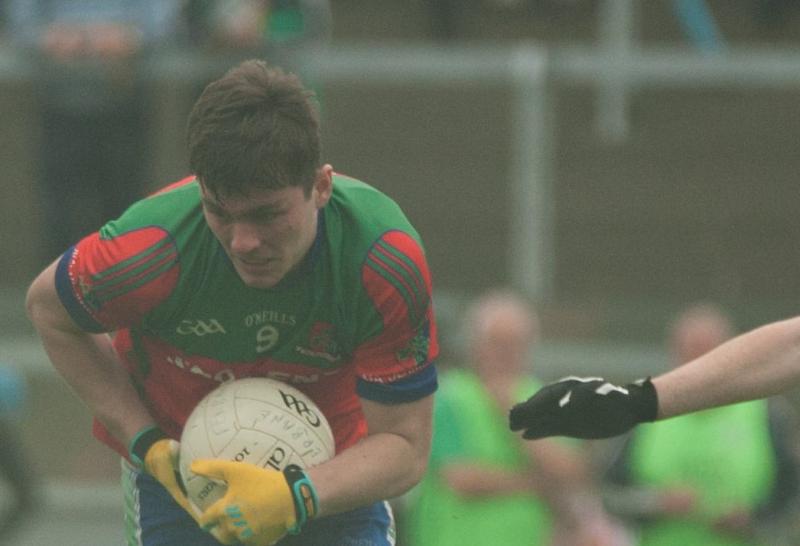 Andrew Delaney had a great game for Shamrocks at midfield.

SHAMROCKS lived dangerously as they booked their place in the quarter-final of the Tullamore Court Hotel Senior Football Championship with a hard earned three point win over Bracknagh in Geashill on Sunday evening.

In their final group 2 game, this was a winner takes all tussle with the victor going into the knockout stages and the losers heading to a relegation shootout with Cappincur.

Shamrocks survived thanks to a mixture of a much improved second half display and three pivotal, game defining moments helping them along the way. A soft if excellently finished goal from Jack Bryant allowed Shamrocks to go in trailing by only a point, 1-5 to 1-4 at half time and considering how little football they had played up to this point, that was actually a very good position for them.

Bracknagh should have got a second goal at the start of the second half. As Shamrocks full back Kieran Dolan disputed a sideline ball, Bracknagh swpt the ball into Darren Kelly who was denied by Sean O'Toole from point blank range. It was a superb save but really the ball should have been buried and a goal would have given a huge boost to Bracknagh.

The dismissal of Bracknagh corner back Eoin Hyland for a second yellow card seven minutes into the second half further loaded the dice in Shamrocks' favour. They were still a point down, 1-6 to 1-5 at that stage and engaged in a ferocious survival battle. After this, they gradually got on top in most sectors, restricted their opponents to just two further points and eventually got the scores that secured the win.

They were clearly the better side in the closing twenty five minutes and deserved to advance but this was a game that could very easily have unravelled for them and Bracknagh will look back with regret on the evening. The Shamrocks goal came six minutes from the interval when Jack Bryant got possession after a Fionn Dempsey mistake. Bryant's finish was out of the top drawer but it was still a big break for Shamrocks.

It enabled them to go in only a point down at half time when a quite abject first half display really warranted a four or five point deficit. It wasn't that Bracknagh were that good but Shamrocks played mainly in third or even second gear in that opening half and it was bemusing to note how off the boil they were considering the enormity of the stakes. They did improve as the half wore on, finally finding some momentum coming up to half time and Bracknagh never really looked like winning it in the closing twenty minutes plus.

Overall, it was an engaging, compelling, competitive game with plenty of good football, mistakes and a lot of hard hitting.

Peter Cunningham was the dominant figure in the first half, getting on a lot of ball and finishing well. He got an excellent point from play, a sideline and a mark as Bracknagh stormed into a 0-4 to 0-1 lead after fifteen minutes. Without doing anything special, Shamrocks got the next three points through Nigel Dunne (two frees) and Alan Heffernan to level it up by the 20th minute but a 22nd minute penalty goal from Peter Cunningham after Eoghan Geoghegan was fouled gave the scoreboard a more realistic look.

Bracknagh's joy was shortlived as Bryant's goal arrived two minutes later, though a Cunningham “45” gave them that interval lead.

A Peter Cunningham free pushed Bracknagh two clear early in the second half but Shamrocks levelled it up with a lovely Bryant point and a Nigel Dunne free – moments after Hyland's red card. The raiding Gary Hutchinson put Shamrocks ahead, Bracknagh equalised through Darren Kelly but by the time their next point came, the game was beyond their reach.

With the extra man making a big difference, Shamrocks got three points to lead by 1-10 to 1-7 in the 59th minute. Nigel Dunne's free to put them three up calmed their nerves as a draw was enough for Shamrocks and Paddy Dunican's point meant that they really could not be beaten. Sub Robin Galbrith got an injury time point for Bracknagh but it was too little too late.

This Shamrocks' performance won't cause any sleepless nights for the main Dowling Cup contenders but it was still a good win for them. They did what they had to do and to their credit, they had a few players who really stood up to be counted when the game was in the melting pot in the second half. Andrew Delaney was brilliant for them at midfield while Kieran Dolan, Gary Hutchisnon, Padraig Cantwell, Paddy Dunican and David O'Toole-Greene really came good when they were needed – Dunican was immense in the closing ten minutes.

Nigel Dunne and Jack Bryant pulled the trigger in their attack, scoring 1-8 between them. Dunne was tightly marshalled by the impressive Tom Hyland but got seven points, two from play. Similarly, Jack Bryant was marked tightly by his county U-20 colleague Fionn Dempsey. Dempsey did well, getting his hand in and sticking to his task but Bryant also did his share, scoring 1-1 and moving very well at times.

For Bracknagh, it was a much better display after their mauling by Tullamore in the last round. They competed well and it wouldn't have took a lot for them to have won but Shamrocks did have a bit of an edge in physical strength and strong tackling. Bracknagh were reliant on Peter Cunningham but Kieran Dolan began to come to terms with him in the second half. Fionn Dempsy, Tom Hyland, Jim Hendy and Ciaran Donnolly impressed in a solid defence. Jason Dempsey did a lot of very good work in midfield while Antony Cunningham had a good first half in their attack.

Andrew Delaney (Shamrocks): Andrew Delaney had a super game for Shamrocks at midfield. He worked hard when they were swimming against the tide in the second half and really came into his own in the second half. He carried a large volume of ball, nearly always found a colleague and made some excellent catches. He had a huge influence on the outcome.

The dismissal of Eoin Hyland for a second yellow card was a huge, game defining moment. You would have to feel sorry for Hyland as he was playing well and hadn't pulled anything remotely approaching a dirty stroke. However, his yellow cards were probably warranted and the second one after he hauled down Paddy Dunican was particularly careless as he knew he was on thin ice. The extra man helped Shamrocks to take control.

The usual solid display by Fintan Pierce. Both sides contested some decisions but overall he was fair and firm.

Shamrocks will be delighted to be in the quarter-final. They have a burning desire to get back into the frame for county honours but on the basis of this display, they are outsiders with plenty of room for improvement. Rhode are likely to be a bridge too far for them in the quarter-final.

Raheen GAA Club hosted this game very well in Geashill. They made sure Fintan Pierce had the full quota of neutral officials and they had loads of stewards. They managed traffic efficiently onto a busy main road.

Shamrocks take on champions Rhode in the quarter-final while Bracknagh meet Cappincur in the relegation play off.