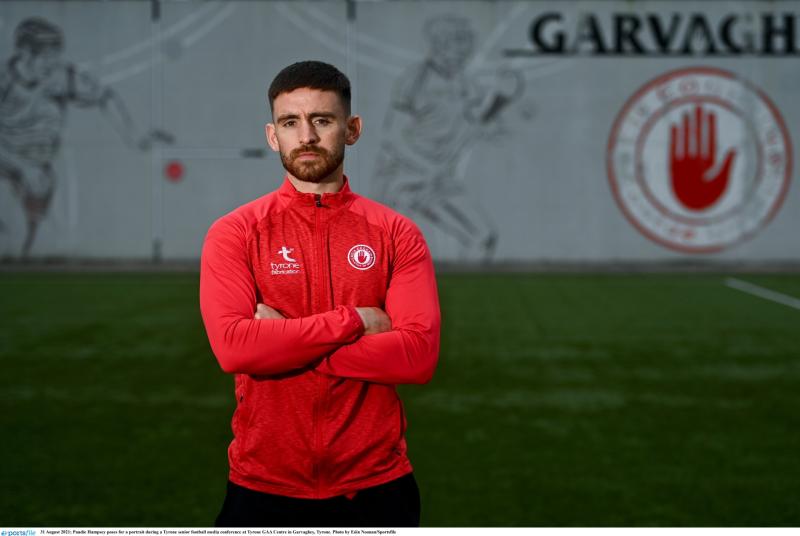 The man who will captain Tyrone in Saturday’s All-Ireland senior football final against Mayo has strong connections with Kilbeggan and Mountbolus.

Padraig Hampsey is the oldest son of Geraldine Leonard, who is originally from Mountbolus, but has been living in Coalisland for the past 31 years. Geraldine moved to the Co. Tyrone town shortly after marrying Paul Hampsey, who she met when he worked in the old Powerscreen manufacturing plant in Kilbeggan.

“We met in the Phoenix Arms in Tullamore and got married across the street in the Bridge House in 1989,” she recalls.

“I still travel up and down to visit my mother Mary, who was 84 last Saturday, and the rest of the family. I am the third oldest in a family of seven girls and five boys. Our homeplace is in Lugamarlow, which is on the Tullamore side of Mountbolus. I still keep in touch with everyone down there.”

One of Geraldine’s brothers, Michael, lives in nearby Rathrobin. His sons Stephen, Colm and Enda have all represented Kilcormac/Killoughey with distinction. Dylan Leonard, who is a son of another brother, Padraig, played in the same full forward line as All-Ireland Poc Fada champion Cillian Kiely when K/K won the Offaly minor hurling championship in 2014. Geraldine, who played camogie herself with Ballymore where she worked as a hairdresser, is a grandniece of Billy Leonard, who scored 2-3 for Dublin against Tipperary in the 1907 All-Ireland hurling final.

Three of Geraldine’s sisters are living in Kilbeggan. Annie and Dympna both reside in Ballard, which is on the Clara side of the town, while Catherine lives in Toarlisnamore on the road to Castletown-Geoghegan. Annie is married to former Kilbeggan footballer Martin Nannery, Dympna is married to Eamonn Daly and Catherine’s husband is Frank Grehan.

The Kilbeggan connections don’t end there as Paul Hampsey briefly played for Kilbeggan Shamrocks in the late 1980s.

“I have fond memories of that time and playing alongside the likes of Martin Nannery, Paudge Morgan, Ray Scally, Paul Daly, Richie Keoghan and Larry Claffey. I’d be still friendly with some of those lads and am obviously related to Martin through marriage. Young Aaron Nannery, who is Martin and Anne’s son, is actually Geraldine’s godson,” he explains.

Paul and Geraldine Hampsey are parents to Aíne McKillion (30), Padraig (27), Eoghan (25), Claire (21) and Brian (17). Last Saturday week was a proud day for the family who were in Croke Park to cheer on Padraig and his Tyrone team to a famous All-Ireland semi-final victory over Kerry, while Brian made a brief substitute appearance in the preceding All-Ireland minor final which the Red Hands lost in heart-breaking circumstances to Meath.

“We were sad to lose the minor but elated to win the senior,” says Geraldine, who is eagerly looking forward to the All-Ireland final against Mayo.

“Tyrone played a great game and surprised a lot of people by beating Kerry. Mayo are going to be hard beaten as well. They played very well against Dublin, who were going for seven-in-a-row. It’s good to see a new pairing in the final. Hopefully, from a Tyrone point of view, they’ll have learned from the 2018 All-Ireland final defeat to Dublin when they weren’t as experienced as they are now.”

An Ulster boxing champion in his teens and a past-pupil of the famed St Patrick’s Academy in Dungannon, Padraig has dedicated himself fully to football in recent years. He won an All-Ireland U21 medal as a full back in 2015 and has since established himself as one of the best man-markers in the game. The Coalisland Na Fianna clubman received an All-Star in 2018, but his biggest achievement to date came a couple of months ago when he captained Tyrone to an Ulster SFC title in what is his first season in the role.

Padraig works as a personal trainer and runs his own gym, PHitness Training. He comes from good Coalisland GAA stock with his father Paul, uncle Brendan and grandfather Paddy having all managed the Na Fianna senior team. In an amazing gesture last year, Padraig presented the Kilbeggan Shamrocks U17 team – which his cousin Aaron plays for – with 25 pairs of socks. The kind-hearted Tyrone skipper also made a generous donation towards the club’s ‘Do It For Dan’ fundraiser in 2020.

With such close ties to the midlands, don’t be surprised to see the Sam Maguire visit these parts if Padraig Hampsey gets to lift it – and if Covid allows – on Saturday.