MADE IN OFFALY - Slieve Bloom Brewing Company – 'Born In Rebellion' 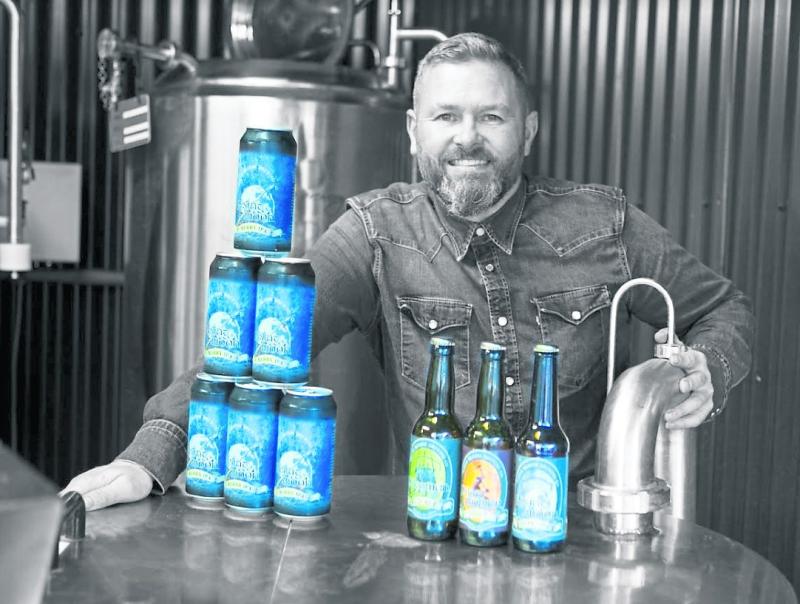 Since it began a few years ago Slieve Bloom Brewing Company has been making a number of top quality beers which have received the thumbs up from many people.

Managed by the friendly and hardworking Kieran Clements the Kinnitty company is one of the region's success stories in recent years.

The Ingredients
All Kieran's beers have been developed and produced in Kinnitty, using all natural ingredients with no preservatives.
The malt comes from Loughran Family Malt in Co. Louth and from locally grown produce in Carlow. One of the company's beers, The Rising Moon IPA, is made using organic blueberries from a farm in Geashill.

The Owner
“I’ve been in the bar game all my life,” says Kieran. “I’ve always had itchy feet for travel and experience, and my love of learning about food and drink has seen me work in 32 bars around the world, along with several restaurants. From that time what struck me was my connection to home, how - with all the major breweries producing homogenous products, and new craft breweries producing wild flavours – I wanted to create a set of beers for my pub in Kinnitty, the Slieve Bloom Bar, that captured my love of natural ingredients and balanced flavours. I wanted to create beers that would satisfy discerning palates while also giving my local customers a delicious comfortable pint that they could enjoy.

“I also have a deep love of, and fascination with, local and Irish history. Throughout all our rebellions there are amazing stories of ordinary people doing extraordinary things. None more so than the pikemen of 1798, and I decided to honour those men and women by designing and dedicating my beers to them. I think as well that by doing this, it helps carry that bit of history and the stories to a new generation of people who might not be as familiar with that part of our history.”

The Origin
Kieran says he was visiting the village of Toome in Co. Antrim, which was a point of origin for the 1798 Rebellion in the north when, in a moment of serendipity, he met Alistair Thompson from Dunbar, Scotland. Alistair is a third-generation brewer, son of famous brewer George Thompson. “We spoke about our shared interest in beers,” explains Kieran, “and very shortly after, I built my brewery in Kinnitty and Alistair worked with me to refine brew after brew for about 18 months until we finally were happy with the three beers we produced. He really is an artist with beer, and the balanced flavours really show his skill.”

Originally intending to only sell the beers in his Kinnitty bar, it soon became clear that people liked them – a lot. “The demand was very high and I sold out often,” he recalls, “but when the pandemic hit, I then had an opportunity to sell my beers online. The demand really grew from there, and we now stock in off licences across the country. As we grow our brand I want as many people as possible to taste and enjoy our beers and to do this, we need to have them available everywhere.”

1798 as Inspiration
Kieran adds that he thinks the most significant thing about the 1798 rebellion was that it was not in any way sectarian. “It was inspired by the French revolution, and their goals of liberty, equality and fraternity. Started, in fact, by Presbyterians, it saw ordinary men and women of all religions decide to unite together and risk their lives, under enormous threat of violence from the British rulers, to stand against the injustice of the penal laws and the utter oppression for so much of the population.

“These ordinary people rebelled using the skills and tools they had. Our beers tell the story of three blacksmiths in Kinnitty that were captured and flogged for arming the Croppies with pikes from their forge, under the nose of the High Sheriff Thomas Bernard of Kinnitty Castle. There are so many stories that are handed down in villages and families that will get lost over time. I think it’s really important to remember this period of Irish history and how the wheels were set in motion for so much change since then. I hope the ad will inspire some people to have a read of the history too.”

The Ad
Kieran speaks about an ad he recently shot down in a beautiful barley field in Co. Carlow “and we are very excited about it. The ad features big-wave surfer Al Mennie (star of the new HBO documentary ‘100 Foot Wave’), along with Lynette Callaghan, Daithí Harrison, Steve Kendall and well-known Offaly musician Michael Buckley. I was looking at an early cut of the ad with Ian McCaffrey, the director, and what really hit home was the powerful image of the pikeman – the everyman rebel that left their homes and fought against all odds for freedom and equality. We can’t wait to have the ad finished and out in the wild – it really captures the rebellious spirit of the beers and the inspiration behind them.”