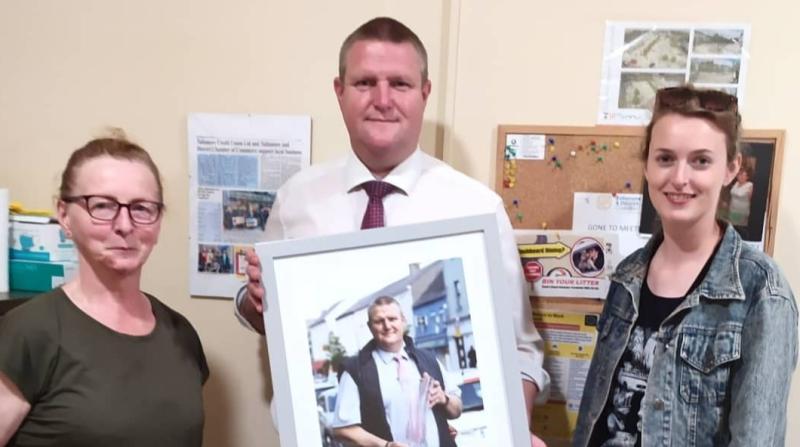 Tullamore and District Chamber of Commerce made a presentation to John Cusack to mark his 25 years as manager of the Bridge Centre recently (l. to r.) Anne Starling, Treasurer, Tullamore Chamber, John

FOR 25 years John Cusack has been the public face of the Bridge Centre in Tullamore.

Under John's management, the town's premier shopping venue has gone from strength to strength and he is now looking forward with confidence to an economic resurgence in the post pandemic era.

But there's much more to the Clonaslee man than his role as Bridge Centre manager.

He is a dedicated community activist and volunteer who is involved in a wide variety of organisations.

A devoted family man, he has a very strong faith and is also a highly successful horse breeder.

John's story begins when he was born in Dublin to Noel Cusack, from Clonaslee, and Maureen (nee Brazil) who hailed from Gurteen bridge in the Killeigh area.

Educated locally at primary level in Clonaslee N.S., he completed his secondary education in Portlaoise CBS.

The strong work ethic which has characterised his life was even in evidence during his schoolboy years when he worked part time with Anthony Maher in Clonaslee and in Pat's Bar with publicans Eugene Kelly and Marty Tilly.

He then secured a job with the Farm Relief Service in Tullamore, at that time under the management of Maeve O'Neill, where he specialised in milking cows on farms in both Laois and Offaly.

But it wasn't all about work and John met and fell in love with Imelda Doyle from Marian Place in Tullamore and the happy couple married in 1989.

For two years from 1990 onwards John worked in Kildare Chilling before securing a position with Irish Rail. In the meantime he was also working part time on the doors at the famous Tullamore Harriers dance venue.

After finishing with Irish Rail in 1994, a time when he also worked on the doors at the Killeshin Hotel in Portlaoise, John worked as a night sorter at the mail centre in the Laois county town.

He also started working at the door of the Bridge House in August 1993 and developed a close relationship with its then proprietor, Christy Maye. While still working part time there he also secured a job in the security sector with John and Vera Clavin in 1995.

“At that stage the Bridge Centre was being built and in June 1995 all the door staff at the Bridge House were asked to help out at a Lions Club charity film premier in the newly opened multiplex cinema,” recalled John.

The centre opened on September 12 1995 with the late legendary broadcaster and television personality, Gay Byrne performing the honours.

“Paul Bell (now proprietor of the Brewery Tap public house) was manager of the centre for the first nine months and I took over in the role on June 21 1996,” outlined John.

He added: “There was an interview process with Christy Maye. He took out money and told me to go and buy myself a suit as I was the manager from the following Monday. I'm here ever since.”

Since its opening Dunnes Stores has been the anchor tenant though other outlets such as Cards n'Things, now Bookstation, have also become household names in the Midlands.

John admitted to finding the role of manager “very challenging” at the start.

“The first thing I bought was a new diary. I stood that first Monday morning and asked myself what was I getting into,” he confessed.

But he soon got to know the ropes. “I have always enjoyed the challenge and I got a lot of satisfaction out of the job.”

He described the team at the centre as fantastic and said many people had been with the outlet since it opened in 1995.

John added that he was totally responsible for what happened at the centre and the job demanded 24/7 attention 365 days of the year.

“No matter how big or small the challenge is we rise to it and take it on,” he outlined.

John said the biggest professional accolade he received during his career at the centre was the prestigious President's Award from Tullamore and District Chamber of Commerce which he was the recipient of in 2020.

He said he was also very thankful for the way his 25th work anniversary had been marked in the centre at the end of June.

Highlights of his quarter century career at the centre include events they organised when Simon Casey was a contestant in RTE's “Your A Star” series in the early 2000s and the time when Ricey Scully spent a week living in a house in the atrium area of the centre to raise funds for charity.

Over the past quarter century the centre has raised tens of thousands of euros for charities, schools and community groups across the Midlands.

“We've never been afraid to try something new here and we've always pushed out the boat to ensure they were successful.”

He admitted that the past year and a half has been very tough during the Covid pandemic but he is hoping to organise an event in September or October at the centre to mark the return to normality.

He enjoyed working with centre owner and developer Christy Maye as he does with the management company, HWBC in Dublin.

Outside of work, John has always been very community focussed.

In the past he was involved with Clonaslee Agricultural Show while presently he is Chairman of the Clonaslee Parish Council. He is also of the boards of the Tullamore Community Training Centre in Kilcruttin and the Arden View Community Resource Centre.

He is also a member of the board of Clonaslee Community College and Vice-Chairman of the Stallion Owners Association of Ireland.

As well as formal committee positions John enjoys nothing more than helping out at events such as the National Ploughing Championships, the Tullamore Christmas Tractor Run, the Pat Colgan Cycle, Tullamore Christmas Lights switch-on and the Divine Mercy conference in Dublin.

“I'm as happy standing at the crossroads as I am on a committee,” John stressed.

The Clonaslee man's life long love of horses started when he was a boy working on a neighbour, Jack Blake's farm.

“I didn't realise then that I had granduncles who were renowned horsemen so it was in the genes.”

The business is located on the lands and yard of Fred and the late Ena Matthews in Bellair, Clonaslee while John also farms on his uncle Mick's land in Brittas.

One of John's daughters Danielle is a vet who works in a veterinary clinic while she has also recently established her own business, Bellair House Stud Equine Reproduction Services.

His other daughter, Louise, who is married to Padraig Byrne from Kinnitty, is a member of An Garda Siochána stationed in Naas.

Religious faith is extremely important both to John and his wife Imelda. He recalled with fondness two pilgrimages he and Imelda made to Medugorje with Tullamore business man Paul Galvin and the duo hope to return there soon.

Family is the cornerstone of John's life and has provided him with tremendous support both in his career and voluntary work. His wife, Imelda, who works as a care assistant with the HSE, has been a rock of strength throughout their marriage and he has fond memories of her late parents, Peter and Margaret Doyle.

“My grandparents on both sides of the family were great influences on me growing up and instilled self belief and are responsible for who I am today,” he added.

During his 25 years at the Bridge Centre he has crossed paths with thousands of people from all walks of life and made great friends.

“I'd like to acknowledge the great advice I've received from many individuals,” said John who added he also enjoyed the friendly inter-county rivalry between Laois and Offaly.

As he reflected on memories from the past 25 years, John said he looked with confidence to the future and expected business to boom at the centre in the post Covid era.