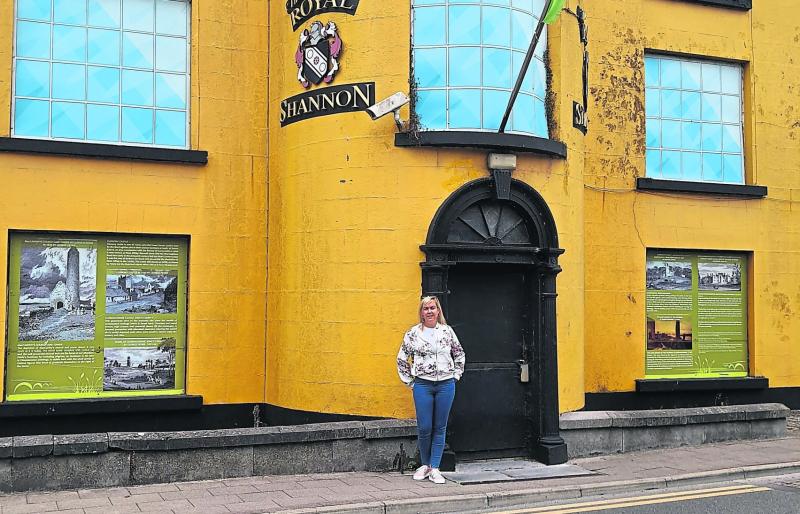 Once thriving hotel in Offaly town is now 'a dreadful eyesore'

A once proud hotel in Banagher is now a dreadful eyesore, stated a local Councillor during the July meeting of Birr Municipal District this week.

Cllr Clare Claffey told the meeting that the Royal Shannon Hotel near the marina was once a beautiful, thriving building.
She said it was bought by a Vulture Fund, which has sat on the hotel for many years and done nothing, allowing it to fall into a bad state of dereliction.

The councillor said the building is a protected structure.

“Unfortunately there are a number of buildings like this in the town, and they look horrendous.”

She said the Marina is buzzing with visitors and locals each day at the moment, but the sight of the Royal Shannon's dereliction casts a shadow over everyone's enjoyment “and is, quite frankly, an embarrassment."

“It is a disgrace that the Vulture Fund which owns the hotel has been allowed to sit on it for so many years without doing anything. We should take on these Vulture Funds and not allow things like this to happen.”

She said she had heard on the grapevine that the premises will be going up for auction. She wondered if the County Council would purchase the premises. Failing that, if it is not put up for auction, then, she argued, the Council should purchase it through a CPO. “If it is put up for sale and it gets a new owner then I think it would be a good idea for the Council to engage with that new owner.”

Cllr John Leahy said he wrote to the Vulture Fund a long time ago but got no reply. He praised Cllr Claffey for not giving up, continously hammering at the problem “and now it looks likely it will be put on the market.” He added that if it doesn't get sold on the private market then perhaps a Rural Regeneration Fund could be directed towards it.

Stephane Duclot, Director of Services, said a masterplan for Banagher Marina will be drawn up, starting in September, and the Royal Shannon will be part of that masterplan. “The negative visual impact of the hotel is a problem for the town, no doubt.”

Cllr John Clendennen said several properties in the town need upgrading. He cautioned against sounding too critical of vulture funds, as they weren't all bad.

Cllr Claffey replied that that was all very well but the Vulture Funds should not be allowed to sit on properties for years and do nothing, “letting them go to rack and ruin. It will not take a lot of money to get Royal Shannon back to the vibrant building it once was.” Cllr John Leahy said he is aware that a number of private investors wish to buy the premises.

Royal Shannon was once a handsome building. It's a terraced three-bay, three-storey former house, built about 1800, with a bowed entrance bay, and modern extensions to the rear. It's a striking feature of the town's streetscape and has been called “one of the grandest structures within the town” and “ a prime example of a grand Irish townhouse”.

Of particular architectural note are the bowed breakfront with conical roof and the finely tooled stone doorcase, with its decorative patera and fluted columns which contribute to the artistic significance of the structure. Enclosing the building is a fine cut limestone plinth with evidence of the positioning of iron railings.

It was once the home of the renowned English novelist Anthony Trollope.