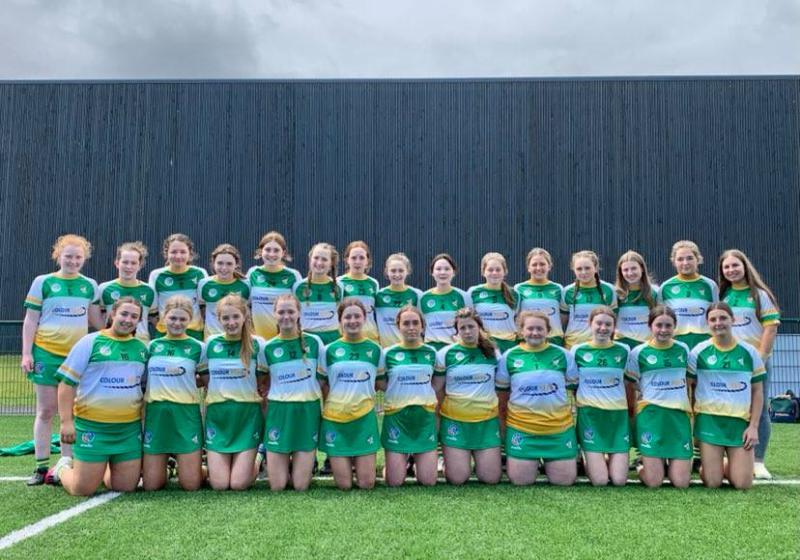 The Offaly Under 16 team have had an excellent campaign to date, taking care of Kildare, Carlow and Laois with some comfort. So they would have travelled to the National Games Development Centre in Abbotstown to take on Antrim in the All Ireland B semi final on Saturday with some confidence.

The weather conditions for the match suited the surroundings in Abbotstown which were perfect for the match.
Antrim started sharply with a point from play almost straight away, but Offaly did not take long to get into their stride with a point from the in form Caoimhe O’Donovan after 4 minutes. After this Offaly had points from Sarah Dillion, Amy Sullivan, Roisin Kinsella and Molly Hogan and after a great save from St Rynaghs keeper Sophie James.

Following this the Offaly girls demonstrated some lovely passing which resulted in Molly Hogan hitting the ball to the Antrim net to leave her team with a comfortable half time lead with the scoreline reading Offaly 1-9, Antrim 0-2.

The second half saw Offaly being clinical with their opportunities and immediately Molly Hogan hit the back of the net and followed with a point two minutes later before she found the Antrim net with another brace of goals bringing the score to 4-11 to 0-2 after only 7 minutes of play in the second half. Roisin Kinsella, Amy Sullivan and Caoimhe Donovan also added to Offaly’s points before the water break to extend the Faithful girl’s lead even further.

The Offaly Management team rang the changes then and introduced a number of subs to give those on the bench an opportunity to play.

After the water break Antrim made another attempt to put pressure on Offaly backs but Sophie James made two excellent saves and was very confident between the posts. Antrim did score a goal in the dying minutes but Offaly replied with another point from Roisin Kinsella to leave the final score showing Offaly 4-17 to Antrim's 1-2.

The Offaly panel and management will be delighted with their performance and the fact they are playing together consistently is really showing. Players are connecting and supporting each other with a flow of accurate passes and classy scores. The defence is solid. A late change to the named team with the injured Ciara Kilmartin being replaced by Bronnagh Kenneally at corner back and Katie Hennessy coming in from the bench at wing forward.

Cait Hickey was her ever calm and reliable self at full back and Caoimhe Ginty had an excellent game on the other corner. Nicola Cleary at centre back was excellent and her ability to read a game and field a sliotar are a joy to watch. Ciara Maher and Katie Hennessy were also excellent.

Grainne Kennedy and Aoife O’Donovan worked hard in midfield with Offaly’s two wing forwards Caoimhe Donovan and Rosin Kinsella, as always a threat against any team and their ability to move the ball around and tackle fearlessly is sublime. Amy Sullivan is a class act at centre forward, scoring three points from play and two from frees.

Fianait Dooley, despite not scoring in the semi final, is a player to watch in the future with her speed and eye for goal. Sarah Dillion was a danger at full forward but unfortunately had to come off with an injury and finally Molly Hogan with yet another great performance.

When a player of the match award is talked about, it can sometimes be contentious to do so at under age but one cannot ignore the performance of Molly Hogan who helped herself to 4 goals and 3 points, all from play.
Offaly will now look forward to an All Ireland Final next weekend where they will meet Meath who defeated Laois in the second semi final on Sunday afternoon.