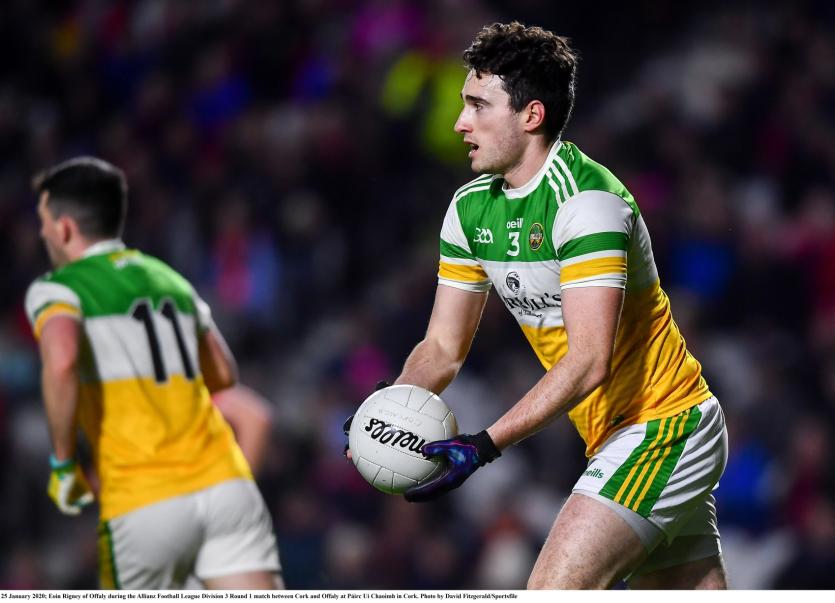 OFFALY senior footballers will have a golden chance of making a significant leap forward when they welcome Fermanagh to Tullamore on Saturday for the National Football League Division 3 semi-final.

It is a real 50/50 game, one that can go either way and Offaly will be treating Fermanagh with the utmost of respect. However, it still represents a great opportunity for Offaly and they will be bitterly disappointed if they don't go up to Division 2.

Things have fallen very nicely into place for Offaly this season. The split league because of a Covid-19 enforced restricted season served them well. They were drawn in Division 3 South with Tipperary, Limerick and Wicklow and this was the easier of the two groups.

Limerick and Wicklow were just up out of Division 4 but Offaly still had to win their matches and they have done this with some style. They have improved with every game and are clearly making progress under Mayo man John Maughan.

The squad look fitter and stronger. They are also playing with a great sense of freedom and they look to be enjoying their football. They are winning tight games and no matter what the opposition, that is a definite step forward for Offaly.

Encouragingly Offaly have improved with every game. They had a 1-14 to 1-10 win over Wicklow in their first game and then finished strongly to beat Limerick by 0-16 to 1-11 in Tullamore. That was a real dogfight but it was the type of game Offaly have lost in the past and the result was the bottom line.

They kept their best performance for their last group game against Tipperary. Tipperary may not have been as good as they were last year when they won the Munster championship but Offaly still played very well in a 1-17 to 1-12 win. It was their best performance in John Maughan's three year reign and it provided the most definite evidence of progress.

They now come up against Fermanagh, who came out of the tougher north division. Fermanagh did very well to beat Cavan by 0-15 to 0-14 in their first game. They were heavily beaten by Derry, 5-13 to 0-9 but a 1-15 to 0-18 draw with Longford was enough to get them into the semi-finals – Derry did them a favour by beating Cavan.

Fermanagh may have come out of the stronger group but Offaly's form has still been more convincing. The nature of their defeat to Derry raises questions about Fermanagh. It was a severe beating to take and the fact that Derry were going very well does not explain that – Derry topped the division with full points and will be red hot favourites to beat Limerick in the other semi-final ths weekend.

Offaly will approach the game in a confident frame of mind. They are playing well and their confidence is growing the whole time. It is a big help to have this game in Tullamore and not Enniskillen. It is hard to quantify but it should be worth at least a couple of points to Offaly.

It will be interesting to see what the Offaly team is when it announced later in the week. Management have made changes as the league has gone on. They experimented with David Dempsey at centre half forward in the first couple of games before returning him to a more familiar defensive role for the Tipperary game. The Ballycommon man will more than likely be kept in the defence for this one and his emergence into one of the team leaders has been a welcome development in this league campaign.

Kilclonfert's Cathal Mangan also started in the attack against Tipp. It was his first game of the year following a back injury and he is not as certain of retaining his place. Mangan is a very good footballer with a good engine and real physicality. He needs more games and may get the nod but management will also give consideration to starting Bill Carroll or Joe Maher.

Niall McNamee is unlikely to start. The veteran Rhode attacker has been superb off the bench this year, especially in the Tipperary win when he drove Offaly across the line. He is not a 70 minute county player at this stage of his career and it will be a big surprise if management don't keep him in reserve.

Johnny Moloney missed the Tipp game with injury and may not be back in time. If he does recover fitness, management will face a dilemma as Carl Stewart did very well in centre half back.

It is an exciting time for Offaly GAA with both footballers and hurlers improving and going well. This game will tell a lot more about the footballers. It will be a real tight, tension filled game but Offaly's form has been good and they may never have a better chance of going up to Division 2 – and seeing where that higher grade of football brings them.