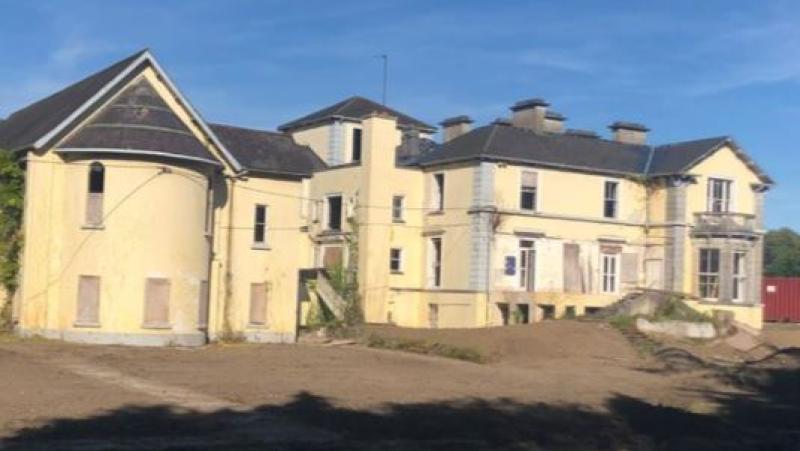 Inchmore House is on the bank of the Brosna in Clara

THE main house at the former Franciscan boarding school in Clara could soon have a new owner, it has been learned.

Cllr John Leahy, who works as an auctioneer, revealed that a buyer plans to invest in the property.

Inchmore House, which is just off the Tullamore road outside Clara, is a protected structure, a status which restricts the renovation works which its owner can carry out.

Cllr Leahy was speaking at a meeting of Offaly County Council where councillors were told the current owner, Aidan Leonard, wished to remove the house from the protected structures list, a move which was opposed by the council executive.

“I do know it's going to be changing ownership and the person who buys it wants to maintain the protected status on it and has the money to invest in it to bring it back to former glory,” said Cllr Leahy.

The Independent councillor from Kilcormac works as an auctioneer and he stressed there was “no conflict of interest” in his remarks and that he was only seeking to bring information after two other councillors, Cllr Frank Moran and Cllr Ken Smollen, had called for the property to be delisted.

Cllr Moran said a picture of the house which is included in the draft county development plan is “very conservative” compared to what he had seen a few months earlier.

“It's absolutely falling down. It's been raided on so many occasions with regards to thefts,” the Fianna Fail councillor said.

Speaking during a meeting held remotely through Zoom, Cllr Moran said the council should engage with Mr Leonard before retaining the property's protected status.

He said several different developments had been mooted for the whole site, which he estimated spanned up to 30 or 40 acres beside the river Brosna, and he described the house as an “absolute eyesore”.

Cllr Moran was supported by Cllr Ken Smollen, Independent, who said the house was a “derelict and abandoned” building and he would be worried if it was retained on the protected structures list.

Rachel McKenna, county architect, said the council had a budget of €650,000 for work on protected structures and removing Inchmore House from the list would make it ineligible for grant-aid.

Cllr Moran responded: “€650,000? That wouldn't even do the foundation of what's going on with that particular site.”

Cllr Moran said while he was delighted to hear there could be a potential buyer he nonetheless proposed it be removed from the list.

Cllr Leahy then disclosed that he had spoken to Mr Leonard and had been told by the current owner that he wanted it retained on the protected structures list.

Removing it would “scupper the plans that are currently happening in the private market” and “restrict the future owners in terms of grants”.

Cllr Moran then agreed that its status remain unchanged.

According to the National Inventory of Architectural Heritage (NIAH), Inchmore House was built in about 1860 for the Goodbody family.

A two-storey over basement dwelling, it has a former double-height church to its rear and is rated as of regional status in the NIAH hierarchy, where international and national are the highest rankings.

When it was run by the Franciscan order it was known as St Anthony's College. The school closed in 1990 and the house and land were later sold.

The property is steeped in history and once played host to Robert Goodbody’s friend and business partner Marconi for 12 months while he was perfecting the telegram and it is believed the Marconi Wireless Telecom Company was formed in the front room of Inchmore House after Marconi’s first successful product testing.

When it was put on the market early last year the vendors indicated its accommodation ran to some 20,000 square feet.