Funding awarded for regeneration of Banagher town centre and marina 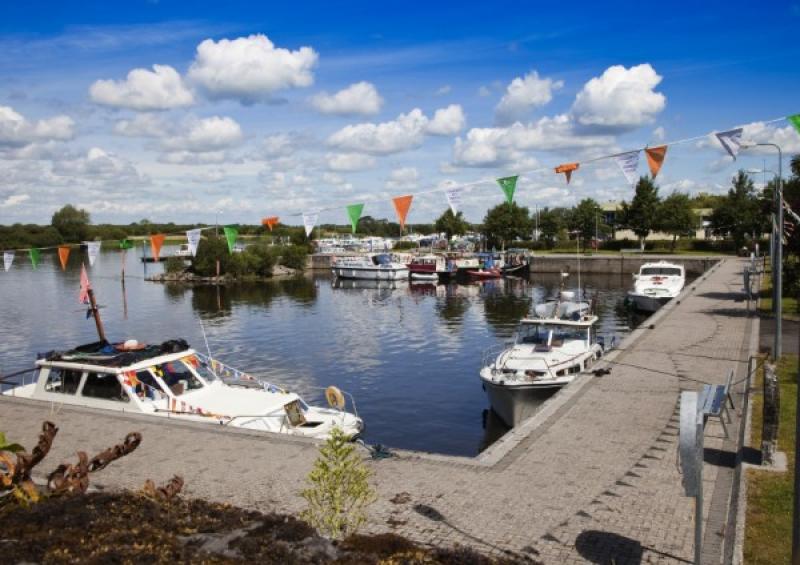 Major funding has been awarded to Banagher which will go towards regenerating the empty buildings in the town and upgrading the marina.
Cllr Clare Claffey welcomed the funding, which is €527,000, pointing out that it is badly needed.
“I am glad to hear that there will be a painting scheme for the houses on the main street.
“The white house in the Square is also an eyesore and we would like to do that up.”
She said there are quite a few derelict and empty buildings in the town and they need to be tackled.
“We need to improve the appearance of the town, for both the locals and for the tourists coming off the boats.”
She said the Shannon Hotel, which has long been an eyesore, had work done on its roof by the Council.

Banagher has a population of 1,760 (Census 2016) and is idyllically positioned on the River Shannon. However it suffered badly during the recession which created a number of empty buildings on its Main Street, some of which are eyesores.
Last year it was announced that Offaly County Council had been successful in its application for funding to the Department of Rural and Community Development, Rural Regeneration and Development Fund under Project Ireland 2040 for a number of regeneration projects in the town.
This funding was confirmed this week.
It's also been announced that a Request for Tender is underway which seeks to appoint an Architect led integrated design team to develop an Architectural and Tourism Master Plan for Banagher Marina and its Environs. The development of this Master Plan has five key stages, including a detailed report on the preferred project options for the Master Plan.
Cathaoirleach of Offaly County Council, Cllr. John Carroll said the investment in Banagher will enhance the town’s potential as an attractive and sustainable place to live, work and visit.
Cllr. John Leahy, Cathaoirleach of Birr Municipal District, also welcomed the co-operation between the local authority, local development groups, businesses and the wider community that led to the success of the funding application.
The funding provided will enable the various projects to be developed to a high standard.
“This Banagher Regeneration funding,” said Cllr Leahy, “gives an unprecedented opportunity to deliver the scale of investment necessary to allow a rural community to further develop and prosper. This investment is more important than ever to help address the challenges arising from the pandemic crisis and to drive economic recovery and sustainable development in rural areas.”
The funding will go towards the design and planning of a digital hub, library and exhibition space to be housed in the currently vacant three-storey building (referred to by locals as “the white building” in the Square in Banagher. The county council has been involved in negotiations to purchase this building.
The funding is also expected to help advance plans for improvements to the currently derelict hotel in the town centre, the regeneration of the marina, and public realm works.
Councillor Clare Claffey described it as great news for the area.
“Banagher needs help and investment. The town has so much potential, so this is really exciting for Banagher and I am looking forward to working on the project with the council and Banagher Development Group.”
She said she was hopeful that the design and planning stages of the process will be completed relatively quickly and the physical work will start.
A couple of years ago a report was published on the progress of Banagher and the five other towns that are part of the Government's pilot 'Town Centre Living Initiative'.
In October 2018, Banagher was one of the six rural towns awarded up to €100,000 in Government funding to explore how to encourage increased residential occupancy while also addressing the issue of vacant properties.
Prepared independently by Space Engagers, the report mentioned the plans to create a digital hub, library and exhibition space in the white building.
“There is a sense that this innovative reuse could energise the town, attract remote workers to live in the town centre, and provide a strong amenity anchor function for the whole town population,” the report explained.
Turning “an existing ten-unit development into a community-run self-catering accommodation project,” was another proposal being considered locally, the report added.