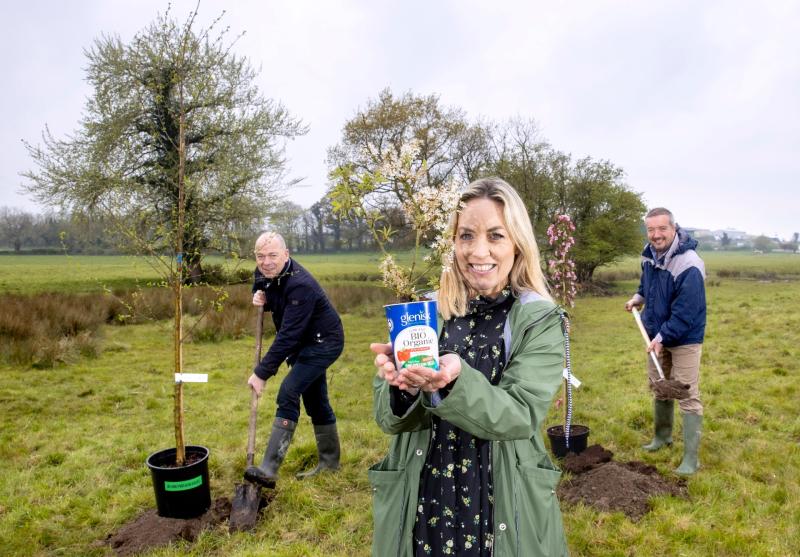 Glenisk and Self Help Africa are replanting 100 acres of former forest land near Glenisk's base in the county as part of their One Million Trees campaign.

Vincent Cleary, Managing Director at Glenisk was joined by Self Help Africa CEO, Ray Jordan; campaign ambassador, Kathryn Thomas; and Pippa Hackett, Minister of State at the Department of Agriculture, Food & the Marine to mark the large-scale forestation project, which will see hundreds of thousands of native Irish trees replanted on land adjacent to the Glenisk production facility in Killeigh, Co Offaly.

First launched in 2020, One Million Trees is a local-to-global climate action programme by Self Help Africa, supported by Glenisk. The campaign’s goal is to plant 1,000,000 native trees in sub-Saharan Africa and a further 100,000 native trees in Ireland, driven through public donations as well as funding and in-store promotions from Glenisk. Such was the respons to the first year of the campaign that the parties have committed to planting another One Million Trees in 2021.

So far more than 1,000,000 tree seedlings have been planted in Africa across 138 sites as part of the campaign since March 2020. The initiative has seen 192,100 people trained, 1,900 acres of trees planted as well as an impressive 15 different varieties planted too.

In late March, the one-millionth tree was planted on community-managed land close to Lake Ziway, Ethiopia, at a location where over 400,000 tree seedlings have been planted since Spring, 2020. Elsewhere, the campaign planted hundreds of trees on family farms, on community land and on publicly owned lands in Malawi, Kenya, Uganda and Burkina Faso.

Planting native trees is vitally important; previous reforestation programs in Ireland have focused only on large conifer plantations used for the logging industry, which have not nourished the local ecosystems. Glenisk have focused on planting native Irish trees which include the likes of Birch, Oak and Wild Crab Apple which will have a far more positive impact on our environment and in supporting biodiversity.

Despite the country’s move into lockdown and growing uncertainty around the globalpandemic within weeks of the campaign’s launch in 2020, the campaign managed to capture the public’s imagination and reach its ambitious target. One Million Trees
ambassador, Kathryn Thomas described the support as “the people of Ireland, yet again, showing what they are made of. The way they embraced this campaign and supported the efforts to plant trees at home and overseas, when so much else was happening in peoples’ lives, is a testimony to the Irish spirit,” she said.

Vincent Cleary, Managing Director at Glenisk is excited for the next chapter of the campaign as the local reforestation project commences.

“Climate change is yet another global pandemic we face, and now is the time to make meaningful change. We know that sustainability and environmental consciousness are genuine concerns for our customers and for our business, so we are proud to be able to take action through large scale tree-planting projects with Self Help Africa. This is one of many steps for the business in reducing our carbon footprint, as we increase our capacity for renewable energy to power our production and remove plastic from our packaging with new climate neutral pots.

"The replanting of the former Glenisk Wood is an important step in reducing carbon from the atmosphere locally, in supporting biodiversity in the region and in the brand’s heritage.”

Self Help Africa CEO, Ray Jordan said that planting trees on lands owned by Glenisk in the Midlands was a fitting way to celebrate the success of the tree planting campaign of the past year. Speaking about the initiative he said, “This has campaign provided us with an opportunity to raise funds for vital tree planting activities, and also highlight the huge impact
that global warming is having on rural poor communities in Africa, where many of the people who are least responsible for climate change are feeling its worst effects”.

Pippa Hackett, Minister of State at the Department of Agriculture, Food &amp; the Marine is encouraging businesses to get involved in reforestation and other climate action measures: “Climate change and the decline in biodiversity is having a significant and harmful impact on people across the globe. It’s wonderful to see Glenisk – a local Offaly company – leading an initiative to plant native trees here in Ireland and in Africa. It demonstrates that there is a role for businesses, large and small, in protecting our environment.”

For further information on the Self Help Africa campaign visit www.selfhelpafrica.org or to donate €5 to plant ONE tree in Ireland and TEN trees in Africa.