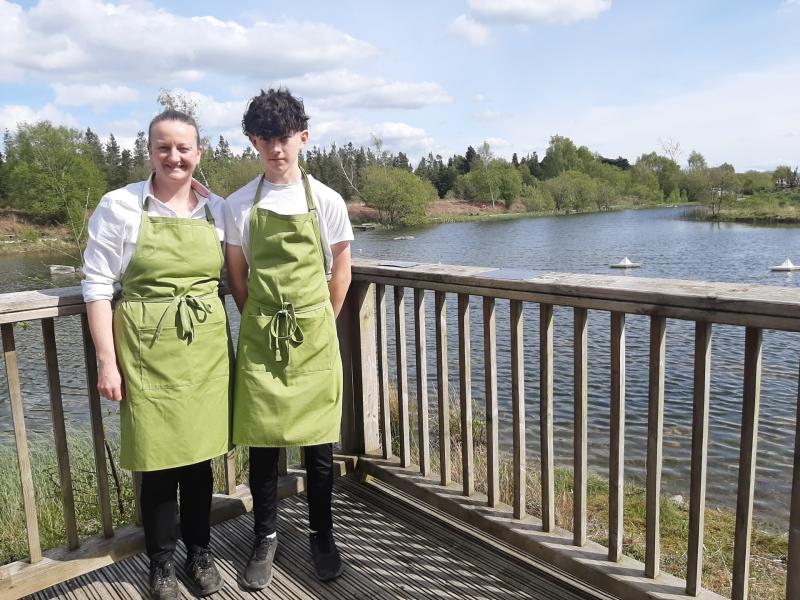 AN Offaly couple have won the contract from Bord na Mona to run the café at Lough Boora Parklands.

As controversy raged over the company's decision to award the bike hire service to a Dublin-based company, Orla Clancy was busy at her newly established Organic Kitchen in Boora.

Orla Clancy and her husband Sean run Clanwood Organic Farm in Cloghan and set up the Organic Kitchen, using a custom-built trailer to bring their produce to events like the Tullamore Show and Electric Picnic.

The Covid-19 pandemic shut down festivals and shows last year and that was a blow to people relying on the events business.

“But what can you do? You have to adapt to it, go with whatever's going on,” said Orla.

The Clancys managed to continue catering and teamed up with Cieran Fallon, a publican in Shannonbridge.

“Fallon's approached us about the idea of doing food in the pub. They had built an extension on to the back,” said Orla.

Outdoor dining is scheduled to resume on June 7 next and Clancys' organic menu will once again be available in Fallon's, where a seated area will be overlooking the river Shannon.

Meanwhile, Orla and Sean were examining other options and learned of the Bord na Mona competition for the business at Lough Boora Parklands.

“The tender came up for this in January and we applied for it and we got it in mid-April,” said Orla.

“We were delighted. We got going here and changed the lay-out and it's takeaway only for the minute but the seats will go back out on June 7.”

Boora Organic Kitchen is open seven days a week and the Clancys have placed the emphasis on using local suppliers, with Mossfield organic cheddar from Clareen and organic vegetables from the nearby Lough Boora Farm, complimenting their own meat and ham on the menu.

The café at Lough Boora was previously run by CaToCa Fine Food, a business founded by Laois couple Kevin and Elizabeth Byrne.

CaToCa built a chain of outlets across the Midlands at Emo Court, Belvedere House and Portumna Castle.

Lumcloon man Pat Barrett, a Bord na Mona employee at Derrinlough briquette factory, founded the bicycle rental service at Lough Boora and ran it for 11 years until learning earlier this month that his tender to continue there had been unsuccessful.

He currently has a bicycle hire business at the Phoenix Park in Dublin but at time of writing, had not begun operating in Boora.

An online petition to boycott the bicycle rental service at Boora which was launched when Mr Barrett confirmed he had lost the business had over 15,000 signatories.

Meanwhile, Offaly Green Party Senator and Minister of State for Land Use and Biodiversity, Pippa Hackett, said that short supply chains should be considered in public procurement.

“We need to support local jobs for local people, and our public procurement process should reflect that, in so far as is possible,” said Minister Hackett. “It needs to be swift, responsive, and locally aware.”

She said that in her role as Minister for State at the Department of Agriculture, Food and the Marine, she is a strong advocate of short supply chains in farming and food.

“Supporting indigenous businesses in counties like Laois and Offaly, will be key to securing a sustainable future there, and any cost-benefit analyses of investments have to go further than just the economical - there is the social, and the environmental to consider also," said Minister Hackett.

“This Government has committed to evaluating our procurement strategies, and part of that relates to the delivery of community benefit, and to minimise the environmental impact. This is really important, and I am working closely with my government colleagues to ensure that this will the case in the future, and that Just Transition is kept high on the cabinet agenda.”