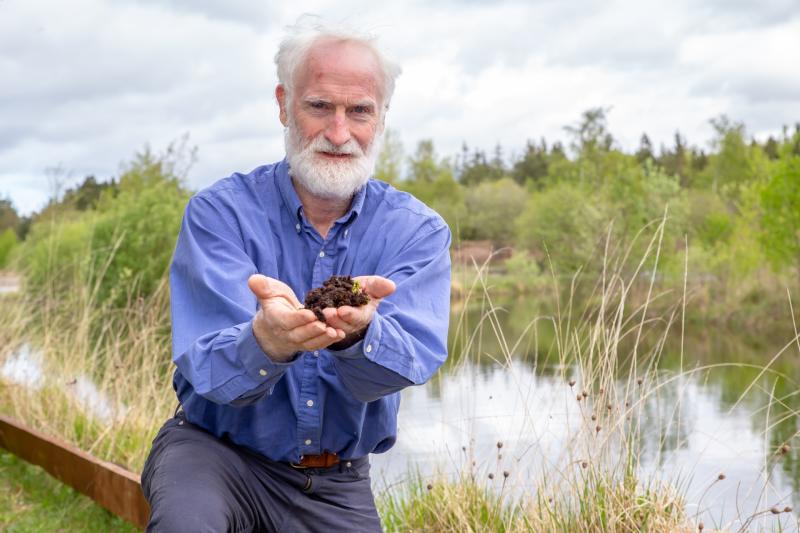 Duncan Stewart at the 'Green Offaly' initiative launch in Lough Boora a couple of years ago. Offaly County Council is adding support to this initiative through its own Climate Action Plan.

With an eye on the threat posed by global warming Offaly County Council is currently implementing a Climate Action Plan which contains a number of measures to improve Offaly's global warming profile.

Speaking during the April meeting of Birr Municipal District, Mary Hussey of the Council's Environment section said the Climate Action Plan is continuing to be embedded in nine sections of the Council.

She pointed out that the Area Engineer for Birr Municipal District, John Mitchell, attends the meetings about the plan with a view to implementing the measures in the South Offaly region.

Ms Hussey said the Council has to have the plan drawn up by the end of this month stating how the Council is going to reach its various Climate Action targets. The Plan will be submitted on May 18.

She said the PPN met just before Easter and discussed the Plan. The PPN (Public Participation Network) is a network that allows local authorities to connect with community groups around the country.

The Climate Action Plan takes into account electricity, enterprise, housing, heating, transport, agriculture, waste, and the public sector. The Plan states that better land use management should be responsible for 26% of total carbon dioxide emission reductions over the period 2021 to 2030.

Offaly County Council adopted a Climate Change Adaptation and Energy Efficiency Strategy for the county in 2019, which takes on the role as the primary instrument at local level to: (i) ensure a proper comprehension of the key risks and vulnerabilities of climate change; (ii) bring forward the implementation of climate resilient actions in a planned and proactive manner; and (iii) ensure that climate adaptation considerations are mainstreamed into all plans and policies and integrated into all operations and functions of Offaly County Council.

Ms Hussey said Offaly Co Co is working with many different stakeholders “to deliver our Climate Action targets. Offaly County Council have a number of projects ongoing which will enable us to fulfil the goals identified as part of the Climate Change Adaptation Strategy, adopted by Councillors in 2019.

Proposals for the first decarbonisation zone in the county are being developed. Following on from the announcement of the Climate Bill and the launch of the 2021 Climate Action Plan Consultation, we entered the next phase of our communications on the Consultation. Having already held the local engagement workshops with the community and youth groups, we are now focusing on driving as much traffic to our consultation platform as possible.

This week we launched our promoted campaign on Facebook and Instagram, encouraging people across the country to engage in our online consultation. In addition, in the coming weeks we will be launching a series of organic posts on our channels relating to the main themes of the consultation - Travel, Home, Shopping, Food, and Local Environment.”