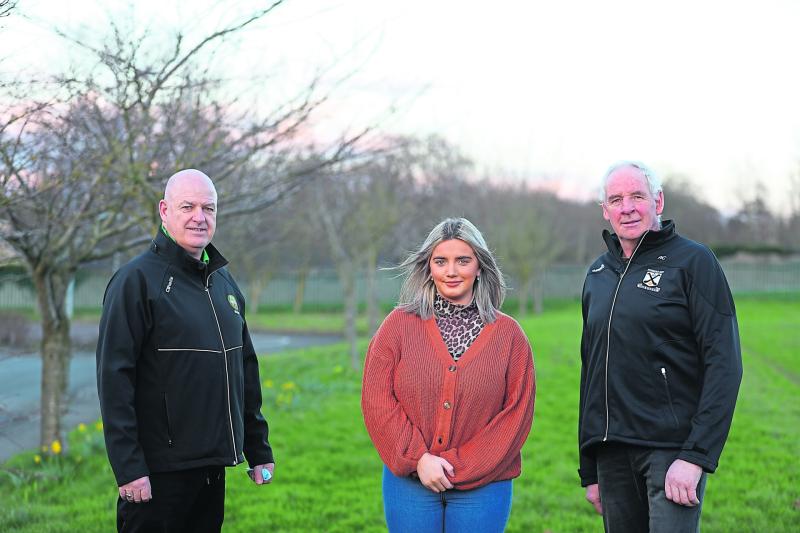 Pictured are Keeva Abbott, centre, who will skydive on Saturday, April 10, the date of her 21st birthday along with John Sampson and Paddy Connors in an effort to raise funds for the Midlands Hospice

An Offaly woman is doing a sponsored skydive on the day of her 21st birthday in memory of her father, who passed away last year from cancer at the young age of 46.

Keeva  Abbott is taking to the skies on her 21st birthday along with Paddy Connors and John Sampson on Saturday, April 10 in aid of the Midlands Hospice Building Fund.

The trio are doing the parachute jump in memory of two much loved Clareen people, the late Kevin Abbott (Keeva's dad), who passed away in November last and the late Rosaleen Connors (wife of Paddy Connors), who lost her battle with cancer last August.

Organised by Seir Keiran's GAA, Clareen, the date was chosen as it also happens to be Keeva's 21st birthday and the almost 21 year old wanted to do something special to remember her dad on her 21st birthday and what better way to do it than do a fundraising skydive.

A devoted family man, a much loved Seir Kieran clubman and a popular referee, Kevin Abbott passed away last November less than a year after being diagnosed with pancreatic cancer at the age of 46.

Rosaleen Connors,  wife of Seir Kieran stalwart Paddy Connors,  passed away last August. A mother of four and predeceased by her beloved daughter Melissa, Rosaleen was a member of one of Offaly's most famous hurling families the Troy family from Lusmagh.

Kevin and Rosaleen were much loved members of their communities and Seir Kieran GAA was keen to remember both in some way while raising funds for charity in their name.  Following consultation with the Abbott and Connors families, it was decided that funds raised would go to the Midlands Hospice building fund and efforts would be made to raise funds to help towards this.

Kevin had a keen love of aviation and had previously completed his own skydive and so a skydive was chosen as a fitting event.

Speaking to the 'Tribune' this week before her skydive, Keeva couldn't wait to “jump out of a plane in honour” of her dad.

“Daddy adored anything to do with planes. He’d sit out in the garden for hours on end looking up into the sky and pointing out each plane and explaining where each one was going from the many apps he had downloaded on his phone! He also did one himself and loved it so that’s another reason I’m doing this in his honour.”

Keeva had the same level of excitement and courage as her Daddy so when he said “all he wanted to do was to get back up and do it again after his jump”, she knew this was exactly up her street and she undertook the fundraising skydive in his memory.

The soon to be 21 year old thanked everyone for their donations, likes, shares and comments regarding the fundraiser. “I know my daddy is grinning down on us all now with a smile from ear to ear and I am absolutely delighted with how well we have done,” she added.

So far, over €32,000  has been raised and the organisers thanked everyone for their generous support so far. “It's perhaps a reflection of the high esteem that both Kevin and Rosaleen were held,” they told the Tribune as they wished all three jumpers the very best this Saturday.

Meanwhile, anyone who wishes to support the fundraiser can do so at  https://gofund.me/e5ee4b36 or search under 'Sky Dive In Memory of Kevin Abbott and Rose Connors' on GoFundMe.