Offaly store manager features in 'Behind the Scenes' at Tesco 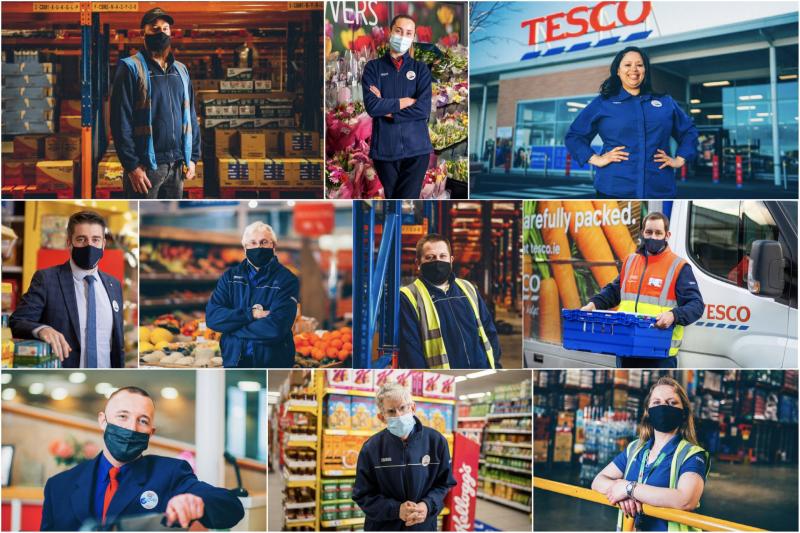 Offaly manager features in 'Behind the Scenes' at Tesco

As the nation marks one year since the beginning of the COVID-19 pandemic, Tesco Ireland has released a series of portraits shining a light on some of the frontline heroes who have been recognised for going the extra mile in their local community.

Operating in a rapidly changing environment this year, Tesco staff have been working tirelessly to ensure that food and essential supplies are readily available to customers right across the network of 151 stores nationwide, when their customers needed them most.

Ireland’s largest food retailer engaged leading Irish photographer and author Ruth Medjber, who has been documenting lockdown life behind ground-floor windows in Ireland, to capture the ‘the real stories of the real people behind the screens’ at Tesco Ireland.

One of those highlighted is Ger Lynch, Store Manager, Tesco Edenderry.

Ger started out 17 years ago as a Security Guard and is now a Store Manager. All those years ago, his manager saw something in him and encouraged him to drive forward. Now, that’s exactly what Ger champions in his store. He is all about giving his staff the space, encouragement, and opportunities to grow, it’s his modus operandi.

He told Ruth that when he retires, it’s not going to be sales targets that he’ll be most proud of but seeing people do well in their lives. He points out that nobody starts a new job wanting it to be a negative experience, so he tries to harness that positivity from the start and allow people to enjoy their jobs. Mental health is a big factor in that and to keep spirits up in 2020 and distract from Covid, Ger started a fitness challenge for the team.

It meant that people were communicating, exercising, getting fresh air, and focusing on some positive elements of their day, all while raising money for charity. I can only imagine how proud Ger’s old boss must be, seeing this former security guard do so much good for so many people.

Commenting on the importance of recognising the unsung heroes across its distribution centres, stores and delivery networks, Tesco Ireland Communications Director, Rosemary Garth, said, “our colleagues make us the organisation we are today. We’re acknowledging their commitment, resilience and hard work by showcasing some of our dedicated team members across the country. The colleagues included in this collection are a representation of our wider team and show how we live our value - no one tries harder for customers. We were thrilled to partner with Ruth as we approached the one-year anniversary of the pandemic. I hope people enjoy the images and stories.”

Photographer Ruth Medjber added, “they turned up for work every day, even in the most uncertain of times and I had the pleasure of chatting with some of the people who work in Tesco stores and warehouses around Ireland.

"I had asked to speak with characters, kind folk, people who had done good deeds or battled through difficult times with great strength…and that’s exactly who I met. Hailed as our frontline heroes, they home-schooled, they suffered with personal tragedies and loss, they dealt with everything that 2020 threw at them and they still managed to be there for their colleagues and their customers when they needed them most. I’ve been truly refreshed and inspired by this project and have gained a whole new perspective on the people behind the screens in my local Tesco store!”

Tesco recently celebrated its fourth year being ranked as a Great Place to Work. This recognition, as one of Ireland’s Best Workplaces and a Best Workplace for Women, was marked over the past number of weeks by a selection of colleagues appearing in a Tesco Ireland advertising campaign. The initiative recognises the hard work of over 13,000 colleagues right across the business.

Since March, Tesco has worked hard to maintain a safe shopping environment for colleagues and customers through a number of measures:

Social distancing and queue management technology introduced at all 151 stores nationwide
391 individual hand sanitiser units were installed with over 130,000 litres of hand sanitiser used to date, which is enough to fill 817 bathtubs
Over 22,000 square meters of plexiglass screens were installed, enough to cover the Aviva Stadium pitch three times over
Over 750,000 face coverings have been provided to colleagues, to date
Scan as you Shop technology was installed in 76 stores to support customers with an even more efficient shop, while enabling customers to manage their budget as they go
Doubled grocery home shopping service and expanded Click and Collect by adding 11 new locations