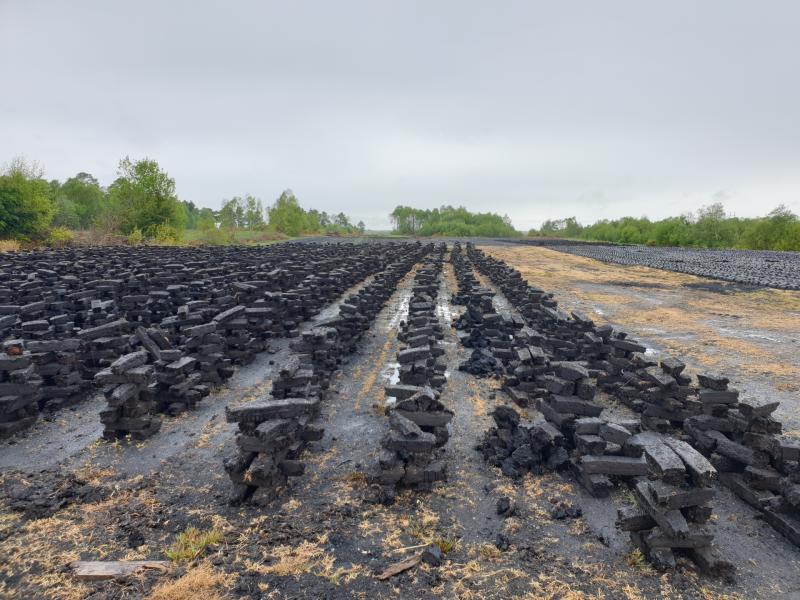 THE Government's consultation on solid fuels is not about imposing a ban on turf cutting and burning, Offaly Green Minister Pippa Hackett said on Monday.

Speaking in the Seanad, Senator Hackett said “no ultimatums” were being issued and she assured people that turbary rights would be protected.

The consultation was announced “because we want to reduce deaths from air pollution and to ensure a better quality of life for those with breathing difficulties,” said Senator Hackett, who is Minister of State for Biodiversity at the Department of Agriculture.

“This Government is committed to delivering a clean air strategy. Unfortunately, people have no choice about the air that they breathe. Anyone who goes out on a still winter's evening in an area with high levels of solid fuel burning cannot help but notice the smoky air. That smoke contains tiny particulates which damage our lungs and our bodies.”

She urged people to read the consultation document before jumping to conclusions about it: “This is not about banning solid fuels. It is about transitioning to better quality solid fuels. For example, swapping smoky coal for smoke-free coal, swapping wet wood for seasoned wood and improving the standards for peat briquettes.

“And this is not about stopping people from cutting and burning their own turf. Those turbary rights will be protected. But it is about reducing harm and cleaning our air.

The Minister acknowledged concerns in Offaly.

She said: “There are however some genuine concerns. People are worried about the increased risk of fuel poverty, particularly in my own county of Offaly where there is such a high reliance on solid fuel. People are anxious about where supplies of alternative fuels might come from.

“And there are concerns too, from those who rely on supplying solid fuels for their livelihoods. And this is why we are consulting. We want to hear about these concerns and these submissions will help us inform us as we make decisions on the regulations.

“There are no ultimatums here. In fact, the homes of the future will not need solid fuel at all. As we embrace higher quality, energy efficient homes, which use electricity generated from renewable sources to heat them. But this is a transition we need to make in a fair and just way.

“And we as a Government need to support that transition. But have no doubts we are moving forward to a greener future with cleaner energy, cleaner homes and cleaner air.”

Last week, when the consultation was announced, Senator Hackett said that in 2018, there were 1,410 premature mortalities arising from air pollution in Ireland and “many people in this country suffer horribly from respiratory diseases that are exacerbated by poor air quality”.

“So it’s timely that we should have a public consultation about how we can lessen the harm from the fuels we burn in our homes – the fuels that pollute our air. Some fuels are more damaging to our health than others. Smokeless coal and seasoned wood, for instance, are less harmful to regular coal, turf and green wood.

“Retrofitting will help to reduce our dependency on burning fuel to keep our homes warm, and Midlands counties have been the first to start retrofitting local authority homes, which will help the air quality here.”

Two environmental groups told the Tullamore Tribune this week that investment in retrofitting will be important in protecting households from any negative impacts which will flow from a solid fuel ban.

Tony Lowes, director of Friends of the Irish Environment, the organisation whose legal action played a role in Bord na Mona's decision to end peat production, said retrofitting grants could be given to turf cutters instead of the financial compensation given when peat restrictions were introduced in some areas a number of years ago.

Mr Lowes believes some turf cutting contractors are attempting to circumvent a High Court ruling by switching to smaller bogs.

Ian Lumley, advocacy officer with heritage trust An Taisce, said any peat cutting currently being carried out in Ireland has not been subject to “a proper planning process”.

“It is all unregulated and that is accepted,” said Mr Lumley.

See this week's Tullamore Tribune and Midland Tribune for more reaction to the Government consultation on solid fuel regulations.