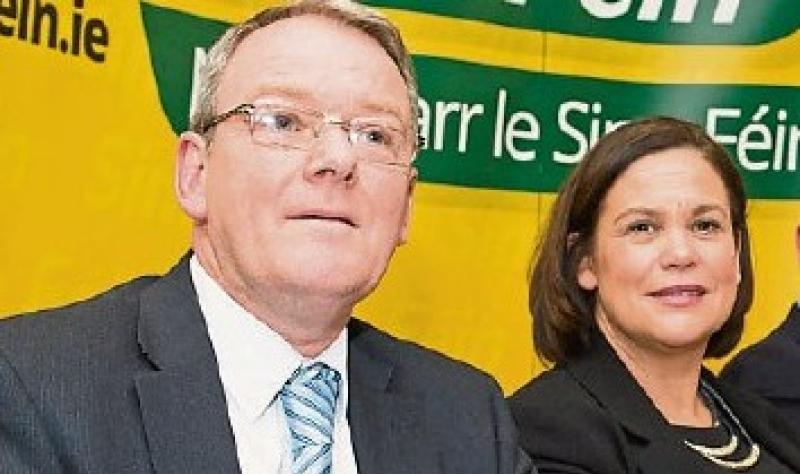 Sinn Féin's Laois Offaly poll topper Brian Stanley has been accused of having 'warped views' by the First Minister of Northern Ireland Arlene Foster who has called into question his holding of a senior position in the Dáil.

Ms Foster levelled the charge at Dep Stanley over a tweet he has since deleted, which, appeared to glorify a Provisional IRA bomb attack during the Troubles.

Eighteen British soldiers were killed and over twenty were seriously injured in the ambush at Narrow Water near Warrenpoint, Co Down in August 1979. An innocent English civilian was killed and an Irish ciitizen wounded, by British soldiers firing across the border into Co Louth after the first blast. The attack happened on the same day that the PIRA assassinated Lord Mountbatten, a member of the British Royal Familyin Co Sligo.

Dep Stanley's tweet also highlighted the Kilmichael Ambush in Co Cork in 1920 in which 18 British soldiers were killed during the War of Independence by the old IRA.

Ms Foster said in her tweeted response that she would be writing to the Cean Comhairle of the Dáil to question Dep Stanley's senior position in the Dáil. The Laois Offaly TD is Chairman of the Dáil Public Accounts Committee.

"It is outrageous that someone with such warped views can hold a senior position in the Dail. SF talk about respect and equality but there’s not much sign of respect for victims,” she said.

The Sinn Féin press office did respond in a statement to some media outlets in which it is stated that Dep Stanley apologised. MORE BELOW TWEET.

I will be writing to the Ceann Comhairle of the Dáil about this shameful tweet. Although deleted, it is outrageous that someone with such warped views can hold a senior position in the Dáil. SF talk about respect & equality but there’s not much sign of respect for victims. pic.twitter.com/dqMdWLI4rp

In the statement Dep Stanley is quoted as saying he is sorry.

“I apologise for the content of an inappropriate and insensitive tweet I sent yesterday (Saturday),” he said.

The Irish Times reports that a spokesman for the party said: “We note that Brian Stanley has deleted a tweet that was inappropriate and insensitive, and that he has apologised.

There is no statement on the Sinn Féin website nor was the apology tweeted by Sinn Féin or Dep Stanley by Sunday evening.

Dep Stanley's original tweet drew criticism on social media other than from the First Minister. Austin Stack from Portlaoise lost his father to IRA gunmen.

An apology isn’t good enough for this obnoxious & disgusting Tweet, this is who they are & it shouldn’t be tolerated, @BrianStanleyTD brings shame on Laois & on the Oireachtas. #Resign @103wf @morningireland @lstwrd @drivetimerte @Independent_ie https://t.co/IfvhOsksXf

Barry McElduff stepped down in 2018 as Sinn Féin MP for West Tyrone after he tweeted a video appearing to mock an IRA atrocity in which 10 Protestant civilians were murdered.

An opinion poll at the weekend showed that 30% of people would vote fore Sinn Féin in the Republic. This is the party's highest every showing.

Dep Stanley has been a TD since 2011. He topped the poll in Laois Offaly in the 2020 General Election which saw Fine Gael lose a seat in the constituency.

A former Sinn Féin TD, Carol Nolan, retained her seat in the same constituency standing as an indpendent candidate.

Dep Flanagan declined to say if Dep Stanley should step aside as Chair of the Dáil Public Accounts Committee.