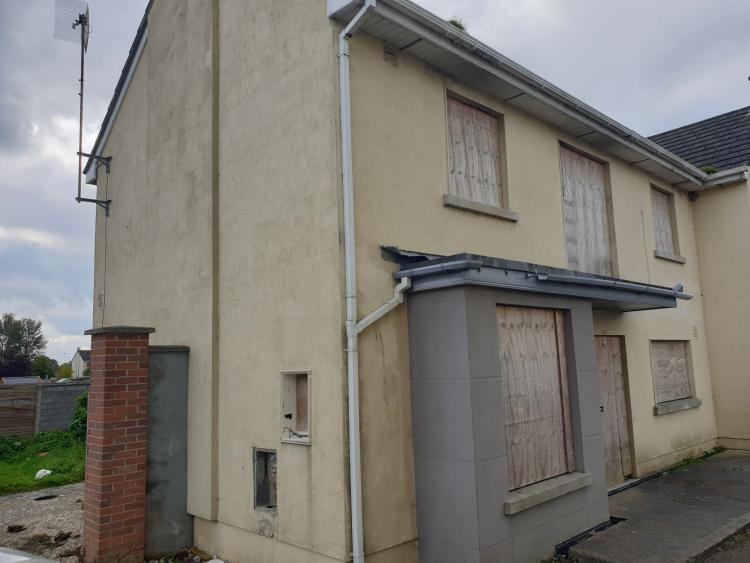 A vacant house in Tullamore

A COUNCILLOR who urged Offaly County Council to tackle the scourge of derelict properties has been warned that a lack of resources would hinder the work.

Cllr Clare Claffey called on the council to set up a dedicated derelict and vacant property task force and said a similar move in Limerick had resulted in 100 houses being returned to use.

“We have a housing crisis and we have lots of vacant and derelict properties,” said Cllr Claffey, adding that not only should the properties be identified, but the council should move to “bring them back”, either by compulsory purchase order (CPO) or by some other process.

A motion from the Social Democrats councillor was welcomed by other members, with Cllr Eddie Fitzpatrick, Fianna Fail, describing it as “very worthwhile” because every town had derelict properties.

Cllr Fitzpatrick noted that Kevin Waldron, an official of the council, had already done a lot of work on a derelict sites database in the council but Cllr Claffey stressed that action was now needed.

Anne Dillon, director of service with the council, reminded councillors that Offaly had 100% rates relief for owners of vacant commercial properties.

Some councils, including Limerick and Louth, had used CPO “to significant effect” but they also had “significant” resources compared to Offaly.

In Offaly three houses were processed through CPO this year and it was hoped they would be brought back into social housing use.

Ms Dillon emphasised that resources are key. “We need central government to fund us through our housing capital programme to acquire these properties and bring them back into use”.

She suggested the motion be brought to the council's planning and housing policy committees for review.

“There's absolutely no point in us moving into towns and villages and investing hundreds of thousands and millions of euro and yet someone has a divine right to leave a property or a site totally dilapidated,” said the Fine Gael councillor.

He proposed amending the 100% exemption over a certain threshold and added that the “carrot approach” hadn't been effective and “now we just need to come with some sort of a stick”.

“If we were to put say a 10% charge of the rates in the first year and increase it to 20% in the second year and the third year increase it again it would focus the mind of the people who own those properties”.

Cllr Ken Smollen, Independent, also supported the motion, saying a lot of the commercial and “former commercial” properties are in a dangerous condition.

Cllr Danny Owens, Fianna Fail, said the issue “comes down to money” and going to the courts would “be a massive spend”.

Cllr Sean O'Brien, Independent, said a task force should be facilitated and suggested involving the Chambers of Commerce or Offaly Local Development Company.

The Texas store in Tullamore was an example of how one business could transform an entire street, he said.

There are numerous vacant properties in Edenderry, said Cllr Noel Cribbin, and the Fine Gael member felt it would be worse if the council did nothing.

Council Cathaoirleach John Carroll said the 100% exemption could be discussed in the context of the 2021 budget talks but he was concerned as a “small county” Offaly would not be able to put together a dedicated team as sought by Cllr Claffey.