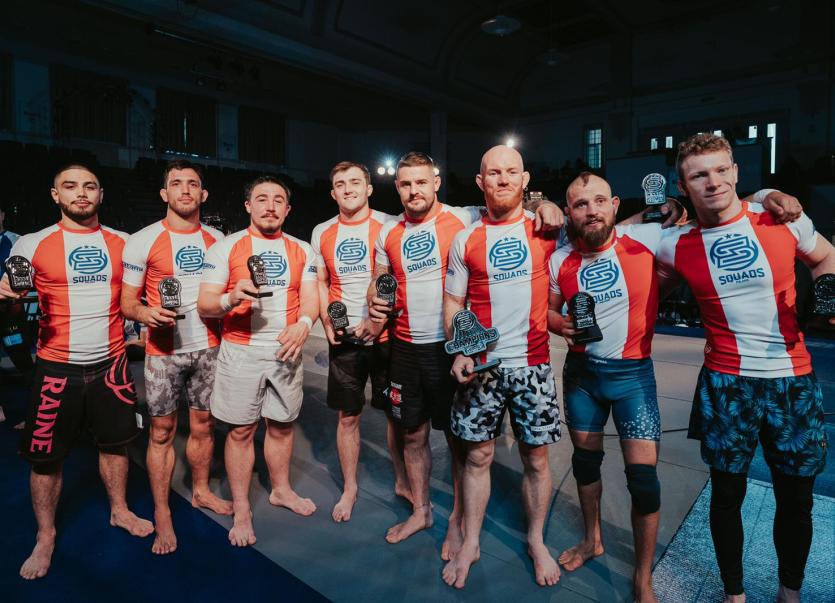 Kieran Davern (fifth from left), with his victorious Ireland and UK teammates

TULLAMORE man Kieran Davern was a member of the Ireland and UK team which won a prestigious mixed martial arts contest recently.

Davern, head coach at SBG Tullamore, was one of three Irishmen and five British men on Team Ireland UK when they defeated Europe in the Polaris Squads.

The teams were divided into 95kg and 75kg competitors and Davern, known for his leglock expertise, was in the heavier category.

Ireland’s sole 75kg competitor was Tom Halpin, the current Combat Jiu-Jitsu Featherweight World Champion and a master of attacking the back.

The Polaris Squads was a submission only event and Halpin emerged as the hero for the UK and Ireland, beating Romania's Dino Bucalet with the tournament's only submission.

All the other contests, including Davern's bouts with Marcin Held and Tarik Hopstock, ended in draws.

The other Irishman taking part was Darragh O’Conaill, the 2018 IBJJF European Champion, who like Davern was in the 95kg category.

Each match had a five-minute time limit and there were no points or judge’s decisions in play so any match that reached that time was declared a draw.

The format of the tournament was that a submission earned a team a point and if a -75kg grappler submitted a -95kg one, he earned his team three points.

The individual matches followed a winner-stays-on format with the losing team captain choosing the next competitor to take the stage.

Another notable difference between Polaris Squads and Quintet was that all submissions were legal, including heelhooks, spine locks and neck cranks.

Polaris Squads was aired on the pay channel UFC Fightpass and can viewed there indefinitely.