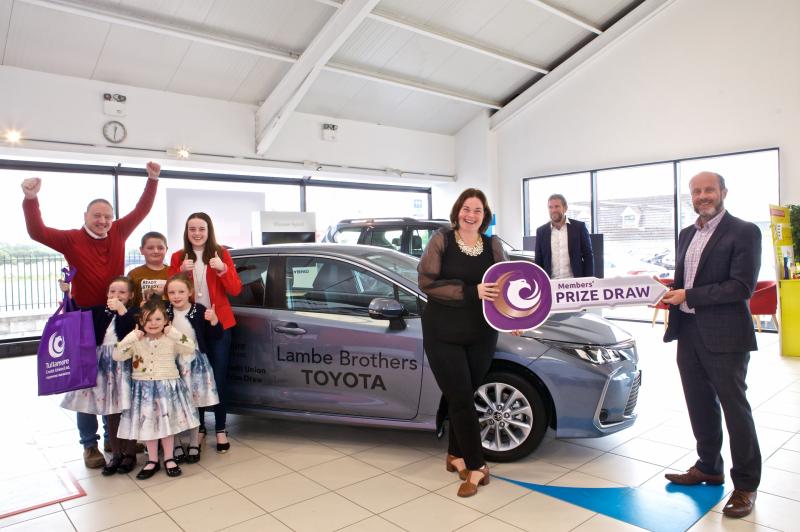 Davina and her family are well known in Tullamore and the surrounding area. Her husband, Liam Dumpleton, hails from Dublin and is frequently heard on Midlands 103 radio. Together, they have five children, Emma (15), Harry (10), Holly (7), Lucy (6) and Abby (5) and pet Labrador ‘Toby’ completes the busy household!

Davina’s family has a long history with Tullamore Credit Union, with her late father Nicky known to everyone for his long service as caretaker. Nicky and Matilda were long time members of Tullamore Credit Union and were always part of the Credit Union family over their many years. Nicky was known as a great character, had a friendly word for everyone and always played a central role in occasions of celebration and ‘mock weddings’ over the years with the staff of the credit union.

Following in her dad’s footsteps, Davina, Liam and the Dumpleton children are all members of the Credit Union and Davina’s win has proved a popular one, with everyone wishing her well.

The draw was conducted live on Facebook, with members of Senior Management, the Board of Directors, Oversight Committee and a representative from BCA (Byrne Casey & Associates) acting as auditor present. Like many members, Davina has long participated in our Quarterly Prize Draw and her wish to one day win the car finally came true this September. The number of well-wishes and messages of congratulations received live throughout the draw, are testament to her popularity.

Our Members’ Quarterly Prize Draw would not be possible without the support of our members – the draw is self-funding – which means that the prize fund is paid by each entrant and nothing is taken from general credit union funds. We thank the local garages who provide the winning car and look forward to your continued support. A special word of thanks to Michael Mc Grath who took the fabulous photo of the Dumpleton family looking so happy, featured also are Fra Mollen, Chairperson of Tullamore Credit Union ltd and Finbarr Coffey, Sales Manager, Lambe Bros Car Sales ltd.

The next draw will take in December – entry is open to members of Tullamore Credit union Ltd only, forms are available in our office and on our website. www.tullamorecu.ie