Collie pups come to the aid of Midlands hospice campaign 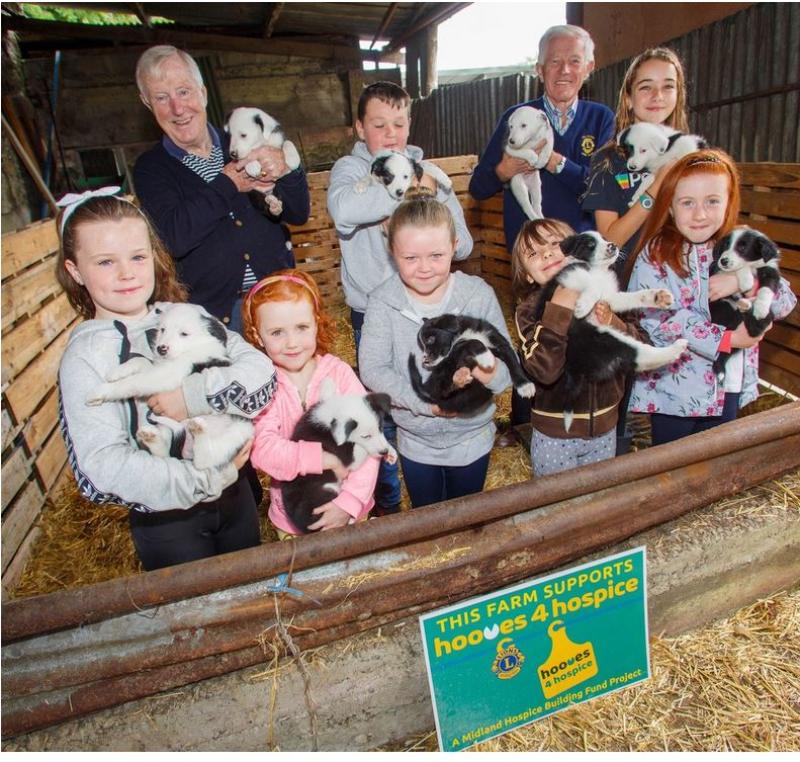 Nine cuddly black and white, very cute collie puppies born to Meg on the Connor family farm at Lehinch, Clara, are the latest inspiring and positive event on the Hooves4Hospice journey.

The playful puppies, with names including Molly, Patsy, Commet and Bell, were collected by their new owners last week, and all have gone to safe and welcoming homes.

“Our first priority was finding good, safe homes for the puppies through friends and farm family contacts. As we feel Hooves4Hospice is such a worthwhile project we decided with the co-operation and generosity of the new owners to give the proceeds of the puppy donations to the project.

“Many of the new puppy owners had already heard about the project and were delighted to have the opportunity to be involved” said Stephanie.

The Connor family vet, Mr. Danny Murray, who runs a veterinary practice in Moate, on hearing of the project and the generosity of the new puppy owners, kindly vaccinated and micro chipped the puppies, free of charge, as his contribution to the project.

Earlier this year, in January, Tullamore Lions Club in association with the farming community in the Midlands launched a very ambitious fundraiser, Hooves4Hospice, to provide funds to build a 16 bedded Level3 Hospice to provide specialist end of life care and support for the people of the four midland counties.

The project, which has the support of other Lions Clubs and the Irish Hospice Foundation, involves recruiting a large number of farmers willing to donate and/or rear a young animal, has the potential to raise a sizeable sum of money for this much needed Hospice.

Despite Covid19 and the restrictions it imposed on the workings of the project, there has been a very enthusiastic and generous response. To date almost 400 cattle have been enlisted in the project.

To that large herd, a growing flock of sheep and very generous cash donations we add 9 puppies this week. So, who knows what next from here!