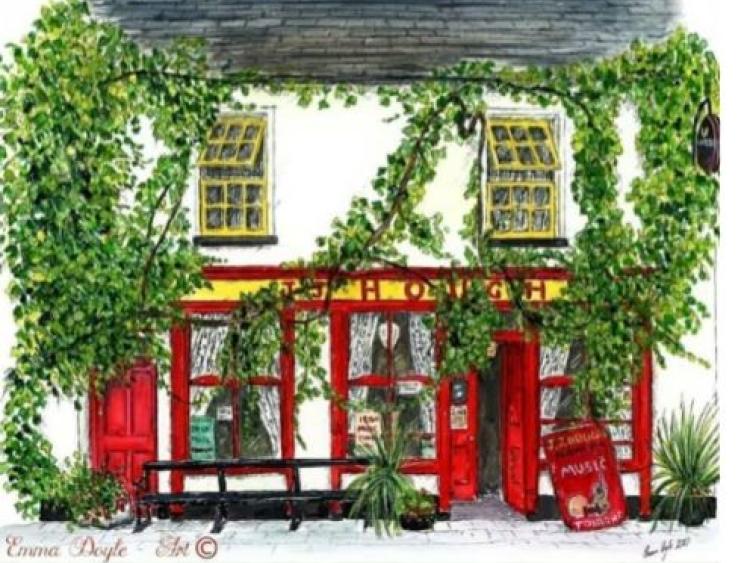 JJ Hough's Singing Pub, Banagher voluntarily announced it was closing its doors before the enforced Government lockdown in March last. Now as part of the recent easing of Covid-19 restrictions, the Banagher premises has opened its doors, but in a slightly different way as part of phase 3 of the roadmap for reopening society and business.

Speaking to the Tribune last week, Gerald Hough outlined what things were like for the Banagher business over the last number of months and what has become the new normal for businesses as we move through phase 3 of the easing of Covid-19 restrictions.

According to Gerald, although it wasn't easy to shut the doors of a business that had run uninterrupted since the 1600s, it was a decision “for the greater good”. “The impact of the coronavirus was really starting to reveal itself, images from Italian hospitals being especially harrowing,” he said.

So despite early March being the start of the tourist season in Banagher, and after a winter of discontent, Gerald said the decision to close the doors was the “right thing to do at the time”. “Gradually, after we managed to flatten the curve in Ireland I began to get rather restless, and by the end of May, I started a 'Go Window' in which customers could pre-order custom made 'Houghtails' that we bottled and bagged for takeaway.”

The move proved a huge success and gave people some semblance of normality back into their lives. “Some of the pictures that people tagged the pub in would bring a tear to your eye, like granddad getting his first sip of Guinness or mammy posing with a strawberry daiquiri.”

Then on June 19, restaurants were allowed to reopen and as Hough's serve pizza, they decided to follow suit. “The organisation and preparation that has gone into this is staggering. If anyone is familiar with the pub they'll know the walls are festooned with all manner of artifacts, paintings and bric-a-brac that have accumulated over the centuries so we didn't really want to disfigure the pub too much with signage and warning posters.”

“ In theory this was the plan, but in reality, after our first night open we realised that people do tend forget the guidelines, but who could blame them. Socialising is in our DNA, and to be denied this for so long, only to be re released was always going to come with a certain element of carefree abandon.”

“ Observing the first in the door reminded me of the scene from Charlie and the Chocolate factory when the kids rush into the room full of sweet delights. Minor rule infringements began to occur, Customers began to gravitate toward the counter, it's a natural magnet for people, so the next day I went out and borrowed the local farmers electric fence. I then put it up around the bar for day two, problem solved.”

“ Seriously though, it's been a new challenge, as we never had any experience in table booking, and as we have only a limited number of tables it's tough when regulars arrive to the door and you have to tell them there's no room, that's been the hardest part so far.”

Looking towards July 20, Gerald is hoping there will not be a second wave of the coronavirus as we move towards phase four on July 20. “ I'm just hoping that we don't get a second wave and by July 20, nobody will be left without a stool, and maybe auntie Theresa will get back to playing her famous piano,” he enthused.