"We jumped on top of him as he was firing and disarmed him." 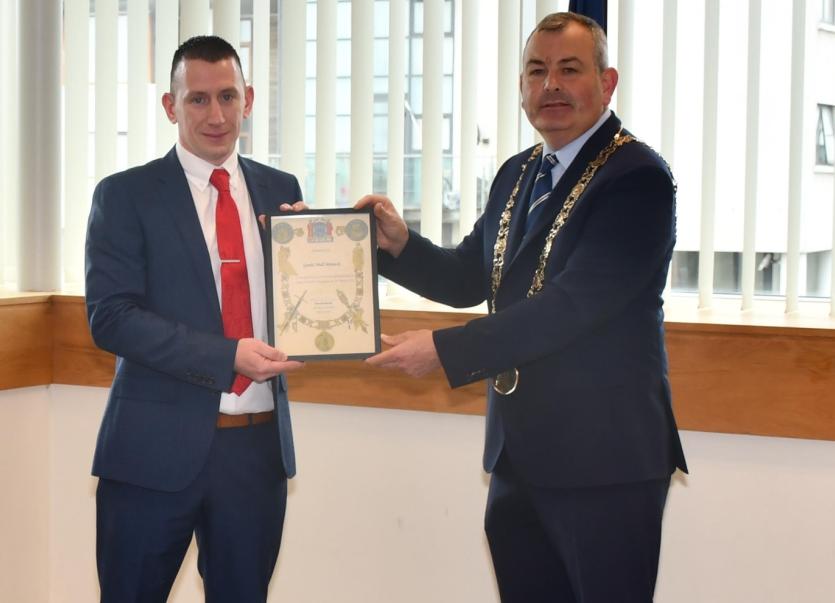 A GARDA from Offaly who is based in Dublin has told of how he narrowly escaped death when a man with a machine gun opened fire on him.

Garda Niall Minnock received a bravery award from the Lord Mayor of Dublin on Monday for his role in disarming a gangland criminal in Ballymun in March, 2019.

Garda Minnock, well known locally as the chair of Cappincur GAA Club, was one of three unarmed officers who responded to a call from a member of the public who reported a man outside a shop waving a gun around.

The gardai were on a refreshment break during patrol when they responded to the call and did not have batons, handcuffs, personal protection equipment or pepper spray.

Along with the loaded machine gun, the man had a hand grenade which could have killed anyone standing within 19 metres.

The gardai chased the man into a house where he sought refuge in a bathroom.

“He was hiding in a bathrooom and we went into him and he fired off a few shots in the direction of us when we approached him,” Garda Minnock told the Tullamore Tribune.

He said it was “just fluke” that neither he nor the other gardai were hit.

“We tried to talk to him and talk him down and then he lifted the machine gun in our direction and let off shots and we jumped on top of him as he was firing and disarmed him then.

Garda Minnock said he was frightened by the incident but added: “It's just one of them things I suppose. You don't really dwell on what could possibly happen and what you don't expect to happen. At the time you just react and you can think about what happened after.

“We were definitely lucky.”

He said he was not even expecting a civic award and only got the call on Friday that he would be receiving it on Monday.

The 36-year-old, who has a three-year-old child Liam with his partner Alison O'Gorman, was presented with the award on Monday afternoon by Dublin Lord Mayor Tom Brabazon.

Now based in Santry, he has been in the Garda Siochana for 14 years.

Garda Minnock said the man who fired the shots, Derek Devoy, was well known to gardai and residents of the Ballymun area.

He was prosecuted and the Special Criminal Court heard his gun went off while a primed grenade was on the floor in the house at Crannogue Road, Ballymun on March 11 last year.

Garda Minnock narrowly avoided being shot in the head when a bullet passed his eye-line in the hallway of the extension where the bathroom was located.

A shell casing struck Garda Minnock and the court was told the Offaly man was lucky not to be two steps forward when Mr Devoy opened fire.

When Garda Minnock and his colleagues, Sergeant Andrew O’Connor and Garda Conor Garland, subdued the man they saw a grenade on the ground with its pin out and fly-lever not attached.

It was detonated afterwards in a controlled explosion.

The gunman, aged 37, was armed with a Makarov sub-machine gun and a Yugoslavian M75 hand grenade.

He pleaded guilty to possession of the gun with intent to endanger life or cause serious injury and to assaulting gardai.

Mr Devoy's father died when the man was eight, his sister was killed when an attempt was made on his own life and his older brother had been murdered in 2014.

The maximum sentence faced by Derek Devoy is life imprisonment. The Central Criminal Court was told he had 27 previous convictions, including two for firearms offences.

Finalisation of his sentencing has been scheduled for July 23 next.