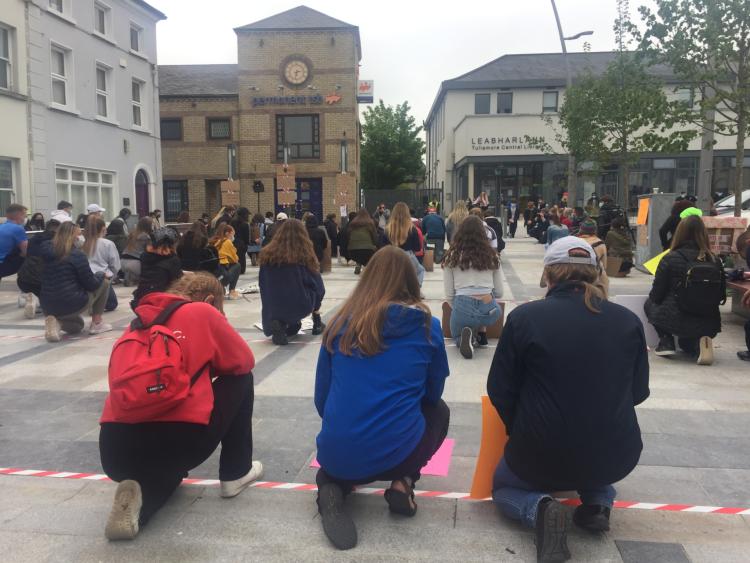 Protestors kneel during a minute's silence

ONE of the organisers of the Black Lives Matter solidarity demonstration in Tullamore on Saturday said she was “blown over” by the support the event attracted.

An estimated crowd of 300 people attended the protest in O'Connor Square which was addressed by speakers highlighting racism and calling for an end to the direct provision system.

Organiser Aoise O'Dwyer said she was “absolutely delighted” with the attendance.

“We knew we had support but we're blown over by the numbers,” she said in the immediate aftermath of the protest.

She said organisers “hadn't been tempted” to call the demonstration off after appeals by local councillors during the week to cancel it due to the Covid-19 crisis.

A discreet Garda presence was mounted at the side of O'Connor Square but there were no incidents.

Many of the protestors carried placards with slogans calling for an end to racism while banners were also erected on buildings and street furniture.

Aoise O'Dwyer stressed that the demonstration was not a once-off event but part of a movement and said similar protests will be held in the future.

She also appealed to those present to become involved in or make donations to anti-racism and emigrant welfare organisations.

During the protest she and other speakers led the crowd in chants calling out the names of victims of racism and police violence, including George Floyd whose death sparked protests across the world in recent days.

A minute's silence, during which most in the crowd bowed to their knees, was observed at the end of the protest.

Amanda Nyoni, from the Movement of Asylum Seekers in Ireland, called for an end to the “inhumane system” of direct provision.

“Because of the fact that you stand here together shows that you recognise there is a problem with racism in Ireland,” she stressed.

“We can no longer be silent, we have had enough of injustice,” added Ms Nyoni.