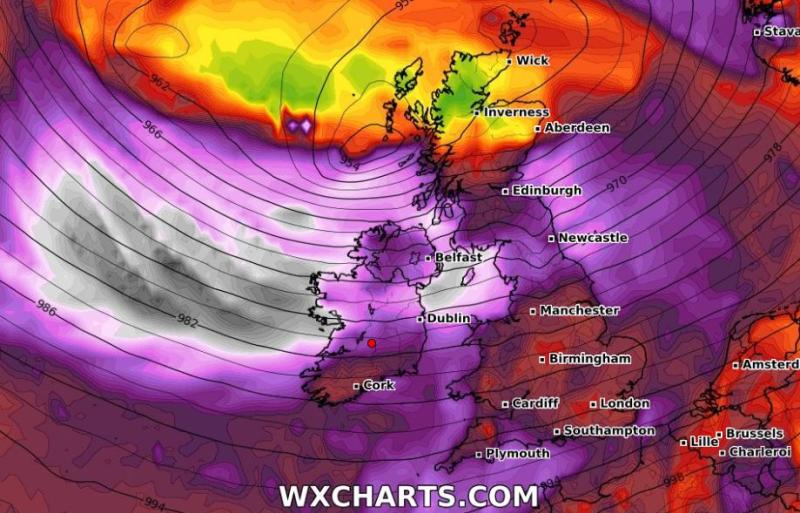 Met Eireann has warned of violent storm force winds off the coast of Ireland as Storm Jorge approaches and has issued a Status Red Gale Warning for the marine area.

West to southwest Gale Force 8 to Storm Force 10 winds will extend to all Irish coastal waters and the Irish Sea on Saturday morning and afternoon.

Storm force 11 winds are the second-highest winds on the Beaufort scale, just short of hurricane force.

Status Orange and Yellow wind and rain warnings remain in place for the country with the worst of the storm expected to hit on Saturday. See more below tweet.

Our 7 day Atlantic Chart shows the precipitation and pressure forecast in 6 hour intervalshttps://t.co/9Giuj4CR5m
A nationwide forecast and outlook covering the next week can be found here. https://t.co/9gKN6SVok4 pic.twitter.com/kHCxQfqfT0

Status Orange - Wind warning for Galway, Mayo, Clare and Kerry
Some severe winds expected during Saturday associated with Storm Jorge (Hor-hay). Southwest quickly veering west and later northwest will reach mean speeds of 65 to 80km/h with gusts of 110 to 130km/h, possibly higher in very exposed areas with an elevated risk of coastal flooding.

Status Orange - Wind warning for Donegal, Leitrim and Sligo
Some severe winds expected during Saturday associated with Storm Jorge (Hor-hay).
Southwest quickly veering west and later northwest will reach mean speeds of 65 to 80km/h with gusts of 110 to 130km/h, possibly higher in very exposed areas with an elevated risk of coastal flooding.

Status Yellow - Rainfall warning for Munster, Connacht and Donegal
UPDATE:
Rainfall accumulations generally between 20 to 30mm expected during Friday and Saturday, but 40 to 50 mm possible in mountainous areas, with a continuing risk of flooding due to already saturated ground and elevated river levels.

Status Yellow - Wind warning for Leinster, Cavan, Monaghan, Roscommon, Cork, Limerick, Tipperary and Waterford
A band of very strong winds, associated with storm Jorge (Hor-hay) will extend across the country during Saturday morning and persist through the rest of the day and into the night.
Southwest veering westerly winds of mean speeds 50 to 65km/h with gusts of 90 to 110km/h expected.

NATIONAL FORECAST
Issued by Met Éirann at 10am on February 28 10:00

FRIDAY 28TH FEBRUARY
Mostly cloudy today with scattered outbreaks of rain, heavy in places, compounding the current flooding situation. Milder than recent days with afternoon temperatures ranging 7 to 11 degrees generally, but remaining cold in Ulster until later in the evening. Fresh to strong and gusty southeasterly winds will veer southwesterly through the day.

Further heavy rain on Friday night clearing to scattered showers by morning. Winds strengthening, reaching gale force in western coastal areas. It will be mild early in the night, but will get gradually colder, with lowest temperatures of 1 to 3 degrees occurring near dawn.

SATURDAY 29TH FEBRUARY
Storm Jorge (pronounced Hor-hay) will impact Ireland tomorrow. There will be heavy thundery downpours of rain and hail, and snow in places for a time in the morning. A stormy day with very strong westerly winds and damaging gusts and some further flooding. Feeling very cold with highs of just 4 to 7 degrees.

Saturday night: Heavy rain will persist in Ulster on Saturday night, with some falls of sleet or snow possible. Elsewhere there will be scattered wintry showers, becoming mainly confined to western areas by Sunday morning. Remaining very windy early on Saturday night, with strong and gusty west to southwest winds and gales in parts of the west and northwest, but winds will ease moderate to fresh later. It will be a cold and frosty night, with lowest temperatures of 1 to 3 degrees.

Sunday: There will be bright spells and further wintry showers on Sunday, with the best of the dry spells in the east and southeast. Some showers may be heavy with a risk of hail and thunder. It will be quite blustery too, with fresh westerly breezes, strong along western coasts. It will be a cold day, with highest afternoon temperatures of just 4 to 7 degrees.

Sunday night will be a cold and frosty night with clear spells and wintry showers mainly in the west and north. West to southwest winds will be mostly moderate, but fresher along western coasts. Lowest temperatures of -1 to +2 degrees.

Monday: Wintry showers will be mainly confined to western areas on Monday morning, but will become more widespread during the afternoon. It will be a cold day with highest afternoon temperatures of 5 to 7 degrees, in moderate westerly breezes, fresh along western coasts.

Scattered wintry showers in western and northern areas at first on Monday night, but becoming more isolated as the night goes on. It will be cold and frosty with lowest temperatures of -2 to +1 degrees, in mostly moderate westerly breezes.

Tuesday: Tuesday morning will start off mostly dry with sunny spells and scattered showers in the west. Cloud and rain is expected to move into the southwest later on Tuesday morning and spread northeast across the country. It will be a cold day with highest temperatures of 3 to 6 degrees, so some falls of sleet or snow will be possible particularly on high ground.